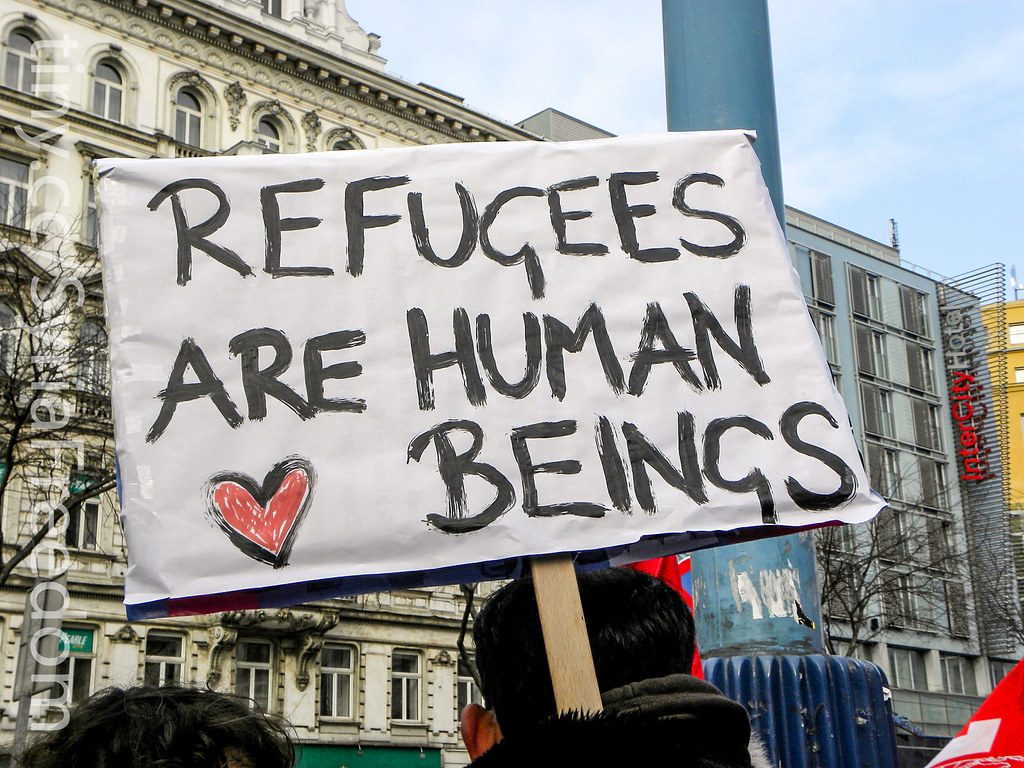 ‘In my country, I feared the war. But here I feared the Home Office': Asylum seekers speak on the UK refugee process

“Refugees Are Human Beings” by FreedomHouse is marked with CC PDM 1.0

Content notice: this article contains mention of sexual assault and suicide, which some readers may find disturbing.

Over 100 stories of women who sought asylum in the UK only to face more hardship have been compiled in a report published in 2020 by Women for Refugee Women (WRW) — a UK-based organization aimed at empowering women refugees.

The WRW determined that 44 percent of asylum-seeking women face homelessness, 95 percent face hunger, and many are vulnerable to abuse in the UK. More specifically, 32 of 106 women said they had been sexually assaulted both in their country of origin, and again in the UK. At the same time, 95 percent felt depressed, and around 33 percent had attempted suicide.

Among the examples compiled by WRW include the stories of Amina and Jemima (not their real names, to protect their privacy).

Amina escaped the war in Somalia twice. The first time was in the 1990s, after militiamen broke into her home, raped her and her daughter, and killed her daughter and brother. Amina fled to a refugee camp in Kenya, where she stayed for some years before returning to Somalia.

The second time, in 2008, when the war broke out in Kismayo — her hometown — and Amina lost two more sons after militiamen kidnapped them. She explained to WRW that her people have been persecuted for a long time by the bigger clans.

We’re very poor — we fish for a living — but the majority clans have better jobs. They've treated us like slaves.

Amina arranged safe passage to England through an agent who, on arrival in London, abandoned her at a supermarket. She found herself alone in a completely strange city, unable to communicate in English.

Though Amina was able to claim asylum the next day, she had to wait 10 years to be granted refugee status — yet, the official Home Office website, the UK department that handles asylum seekers, states the wait is only six months.

Along with other hardships she had to endure — isolation, relying on charities for food and shelter, and shifting from hostel to hostel — Amina developed depression.

In Somalia, I had family. I was sharing the pain. There were a lot of us suffering, speaking the same language. But here I couldn’t share it with anybody. The pain became so much more. In my country, I feared the war. But here I feared the Home Office. I have been tortured every day.

Jemima has been living in the UK even longer — for 19 years. In Uganda, Jemima was tortured and raped while in prison custody. Her so-called crime? Being a lesbian in a country where homosexuality is illegal.

Instead of marrying the man her guardian had arranged for her, Jemima was sent to the UK. She was not aware that she was entitled to request asylum or how the system worked. After holding cleaning jobs for years, immigration officers arrived one day and took her to a removal centre.

While in detention, all the trauma she experienced in Uganda rushed back, impacting what she decided to tell the authorities. Out of fear, she lied about her sexual orientation.

After being released, she was taken to a migrant centre in London, where she finally came out to a gay volunteer. She then received support from the Rainbow Sisters group for LGBT refugees.

I’m a gay woman, but all my life I’ve been lying. No matter if they deport me. I’ve found my people … my family. It’s a type of joy.

Despite making a new asylum claim, Jemima is destitute. Though she told WRW that she feels safer in the UK, she doesn't feel free because she doesn't have a recognized legal status or reliable income.

I’d love to work. Pay for my own house. Sit on my own toilet. You know how happy I would be to have my own toilet? That is my dream.

Discrimination against women asylum-seekers in the UK

Tragically, the stories of Amina and Jemima are not rare: this is the reality for hundreds of refugee women in the UK. While the UK has some of the highest living standards in the world, financial resources and legal guarantees are scarce for the most vulnerable people.

After more than 40 years of working in the UK, the Jesuit Refugee Service (JRS) has listed the many challenges faced by asylum seekers in the country, starting with an unfair asylum determination system. This is because the Home Office's approach is based on disbelieving people since ‘they always think that refugees are not telling the truth.’ They said:

The UK is a hostile environment for asylum seekers. That’s not an accident. Home Office policies deliberately set out to frustrate asylum seekers so that they leave the United Kingdom.

The JRS added that some Home Office caseworkers are insufficiently trained to handle asylum cases and make biased decisions ignoring essential information — for instance, a gay refugee was going to be deported back to Cameroon, a country that doesn't tolerate homosexuality.

Although working would allow asylum seekers to meet their basic needs and improve their mental health, they are not allowed to and end up financially excluded. Access to basic rights is highly limited — including healthcare and education — either because asylum seekers are barred from the system or can not afford them. On top of that, asylum seekers may be detained for long periods.

JRS has warned that all these obstacles can seriously impact refugees physical and mental health, lasting even after refugee status has been granted. The longer the process takes, the more significant a toll it will take on them.

Statistics from the House of Commons, as of June 2021, determined that more than 30 percent of asylum applicants were subject to removal — some, after a five-year delay. This figure represents hundreds of asylum seekers at risk of living in the streets, exposed to poverty, trafficking and exploitation.

To make matters worse, since April this year, the Home Office resumed evicting asylum seekers ‘with immediate effect’ after a brief moratorium due to COVID-19. Though the government has stated its intention to treat refugees fairly, its policies do not reflect this. In May 2021, the UK House overhauled its immigration systems and implemented the New Plan for Immigration which is expected to worsen an already precarious situation. The new plan would allow the government to send asylum seekers out of the country while their cases are reviewed, bar refugees from accessing public services and make it even more challenging to apply for asylum status in the UK.

Many human rights groups have criticized this plan and said it violates the 1951 refugee convention. Rossella Pagliuchi-Lor of the UN Human Rights Council (UNHRC) said in a press release:

This Bill would undermine, not promote, the Government’s stated goal of improving  protection for those at risk of persecution. It seems to be aimed at deterring refugees, but  there’s no evidence that would be the result.

The number one cause of suicide is untreated depression. Depression is treatable, and suicide is preventable. You can get help from confidential support lines for the suicidal and those in emotional crisis. Visit Befrienders.org to find a suicide prevention helpline in your country.

‘In my country, I feared the war. But here I feared the Home Office': Asylum seekers speak on the UK refugee process