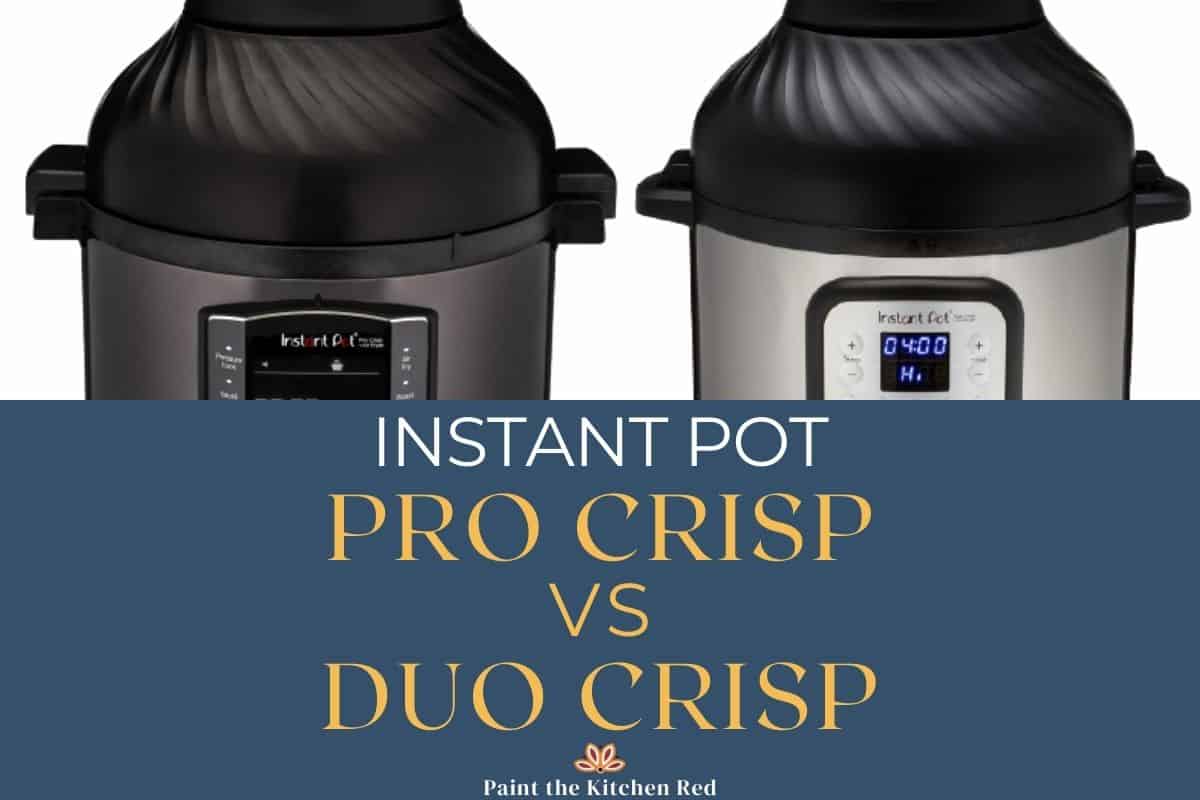 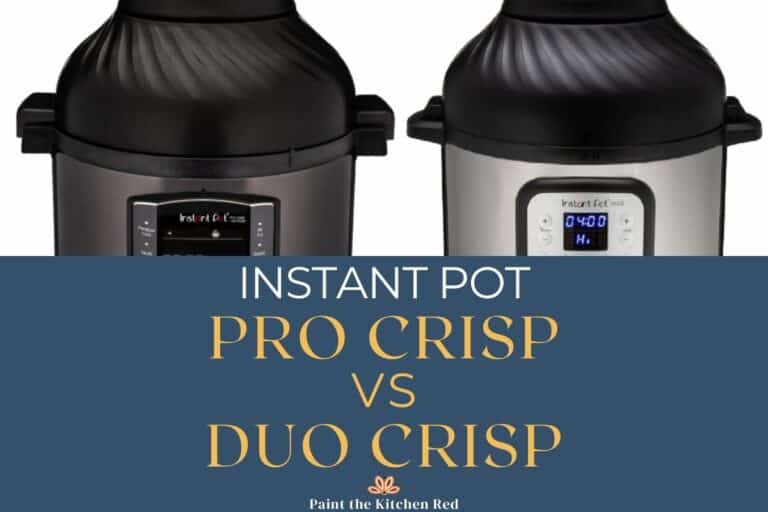 Both the Instant Pot Duo Crisp and Pro Crisp are great models. They are similar in a lot of ways but there are some crucial differences. Find out everything you need to compare the Instant Pot Pro Crisp vs Duo Crisp so you can decide which one is right for you.

Until recently, Instant Pot cooking was limited to certain types of recipes, and crisping up or baking foods was out of the question. The introduction of the air fryer lid has been a game-changer.

You can purchase the air fryer lid as an accessory that can be used with certain models of Instant Pot. At this time, this accessory is only available for the 6-quart size of these models.

But you can also buy Instant Pots that come built-in with air fryer functionality. This article focuses on two models that come with an air fryer lid: the Duo Crisp and Pro Crisp.

Maybe you’ve finally decided to buy an Instant Pot or you just want to get a second one but are having trouble deciding between the Instant Pot Duo Crisp v Pro Crisp. Which model should you buy? Let’s compare the two.

Be sure to check out my guide on which Instant Pot to buy, which gives you a rundown on all the different Instant Pot models. You may also want to read about the Instant Pot sizes and how they compare.

The Instant Pot Duo Crisp is a pressure cooker and an air fryer. It was the first model to be introduced with the air fryer functionality built in. Refer to my comprehensive Duo Crisp user guide for details. Here are some highlights of this model:

Sizes: It comes in both 6 quart and 8 quart sizes.

Display Panel: The display panel has only buttons and no knob. Temperature and cooking time can be adjusted with dedicated buttons. To turn on the Instant Pot, press Start.

Inner Pot: The stainless steel inner pot is the same as on the Instant Pot Duo, Ultra, and Duo Nova. The inner pot doesn’t have any handles and the bottom is slightly raised in the middle, which allows the pressure sensors to detect when the Instant Pot is pressurized.

Pressure Cooker Lid: The pressure cooker lid on the Duo Crisp is similar to the Ultra and Duo Nova. You release steam by pressing a button. The lid also auto-seals i.e. you don’t need to turn the knob from Venting the Sealing position as with some older models of Instant Pot.

Accessories: The Duo Crisp comes with an air fryer basket, a protective pad, and a trivet.

Like the Duo Crisp, the Pro Crisp is also a pressure cooker and air fryer. It has a few extra features that distinguish it from the Duo Crisp. I’ll compare the two models further below. Here are some highlights:

Sizes: It comes in the 8 quart size only.

Display Panel: It has a sleek black profile and the display panel is very similar to the Instant Pot Pro and the now-discontinued Instant Pot Duo Evo Plus. You use buttons and a knob to program the time and temperature. To turn on the Instant Pot, you press Start.

Inner Pot: The stainless steel inner pot is the same as on Instant Pot Pro. The inner pot has silicone handles and the bottom is flat. This inner pot cannot be used in other models of Instant Pot except those with handles, such as the Pro.

Pressure Cooker Lid: The pressure cooker lid on the Pro Crisp is similar to the Instant Pot Pro. You release steam by moving a switch. The lid also auto-seals i.e. you don’t need to turn the knob to the Sealing position as with some older models of Instant Pot. The steam release mechanism has a diffuser cover that allows the steam to be released in a gentler (and less scary!) way.

Accessories: The Pro Crisp comes with an air fryer basket, a protective pad, and a trivet.

Every Instant Pot has smart programs that allow you to perform a cooking function with the press of a button. The Duo Crisp and the Pro Crisp have all the same smart programs.

There are many similarities between the two models but also some important differences. The lid on the Duo Crisp is similar to the newer Duo, Ultra, and Duo Nova.

Steam is released by pressing a button. The lid also auto-seals i.e. you don’t need to turn the knob to the Sealing position as with some older models of Instant Pot

Which Model is Better?

If you take price out of the equation, the Instant Pot Pro Crisp is definitely the better pick. But in the real world, price is always a consideration! So here are the reasons why you’d want to buy one model over the other: