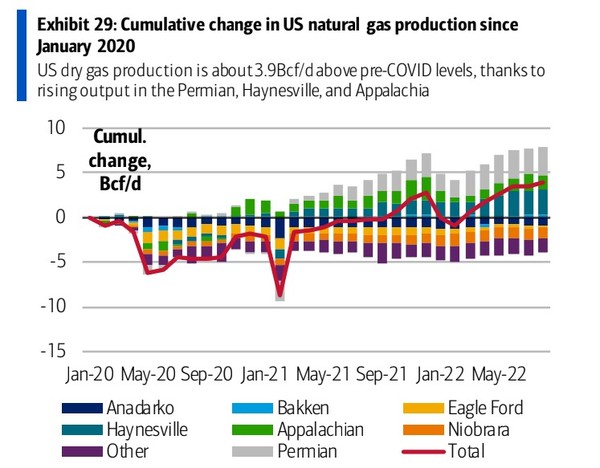 Halliburton (HAL – NYSE) released their third quarter results on Tuesday night and boy were they ever bullish on oil field services (OFS).

Right out of the gate CEO Jeff Miller put it bluntly – “our outlook is strong”.  He followed it up by saying why: “oil and gas supply [will] remain tight for the foreseeable future”.

These comments echoed what we heard from Baker Hughes (BKR – NYSE) when they reported last week.

While Baker Hughes admitted that the macro-outlook was “increasingly uncertain” they said they were looking forward to a “multiyear upswing” in upstream oil and gas spending.

The irony is that what is driving the outlook is the lackluster response of operators.  There is no drilling boom.  Quite the opposite.

It is financial discipline that is setting the stage for a much longer – and potentially more profitable – upcycle.

Baker Hughes expects prices to remain strong even if there is a recession because we just aren’t seeing the usual “drill-baby-drill” response we have seen in the past.  Halliburton pointed to “multiple years of underinvestment” supporting their long-term thesis.

While North America is strong, it is international operations that are accelerating.   South America, West Africa and the Middle East are leading the way.

That’s probably why Schlumberger (SLB-NYSE) is up 50% in a month, and hitting 4 year highs.  This OFS major is very well distributed around the globe.

In the US, The S&P Oil & Gas Equipment & Services Select Industry Index (XES-NYSE) has also had a run recently, within 8% of its year high (which is also its 3 yr high).

In Canada, analysts are talking about a 30% increase in OFS fees to producers this year, with another 10% next year.

So it looks like an increase in revenue and EBITDA for the rest of this year and next year is in the bag—much of it at the expense of oil and gas producers, their customers.

Like the producers, OFS companies have gone crazy trying to grow, with new capex for yellow iron remaining low.  The most I see in costs is actually a “greening” of OFS equipment—moving away from diesel to natgas fueled rigs and machinery.

If you have been reading my blog for even a couple years (I started blogging in 2009) you will remember one of my sayings—there is no such thing as an American oil stock.  They are almost all natgas producers with a 40% + wighting in oil.  The Permian starts off oily, but gets gassy quickly.  Only the Bakken up in North Dakota—where the geology is shallower—do you see true oil stocks.

That means producers’ cash flows are heavily weighted towards natgas—which is looking weak right now, and will likely get weaker.

Natural gas pricing has dropped from levels that quite honestly, I never thought we’d see.  Some say a correction was due.  I say the industry is catching up.  It always catches up.

So there’s a good chance that even if oil prices rise a bit–highly likely–overall cash flows for NA producers might not benefit from higher cash flows if natgas falls even more.

Of course, that has everything to do with pipeline constraints.  But it does demonstrate that producers of natural gas are doing what they do best – producing more of it.

In the Marcellus (northeast USA)  and Haynesville (Oklahoma/Louisiana) rigs are up 50%.  In the Permian, it’s up 30%.  We are seeing higher output as a result – up 4.5 bcf/d year-over-year.

Production of natural gas is sneaking up.  I’ve been telling subscribers for weeks that prices will be coming down as the US is increasing natgas production steadily in 2022—often by 500 million – 700 million cubic feet of natgas per day per month. Inventories of natural gas are sneaking back up towards the 5-year average.

Prices are going the other way.

Natural gas prices are still above $5 which means there is still incentive to drill.  But it won’t take much (a warm winter anyone?) to send them down further.

At some point that could mean a much lower natgas rig count in the US—now at 157.  My research suggests it only taks 110 rigs to keep US production flat, so that’s 47 rigs that could drop over time.  But while the front month natgas price is down a lot, the pricing two years out on the futures curve has not moved near as much.

That’s not a huge predictor of price, but I think that’s what producers will be looking at before seriously putting down rigs. (That will take pricing even lower of course!)

WHAT IF OIL JUST GETS BORING?

While natural gas has a few headwinds, oil looks better.  Trying to figure out what oil prices should be (meaning absent intervention) is impossible.  What with

that are pushing up prices further up the chain – it makes my head hurt.

The simplest answer – the one no one ever says – is maybe oil prices just don’t do much of anything at all?

We’re always looking for a big run up or a huge collapse.  It would confound everyone if oil just sat this one out, in a relatively tight range, and bored all the traders to sleep.

If it does that, the OFS providers will take it as a win.  Those with international exposure (to Brent and Middle East pricing), will do well.

The operators with the biggest exposure are the big guys.  Baker Hughes, Halliburton, Schlumberger (SLB – NYSE).

Going big is usually out of my wheelhouse.  But international small cap OFS is a tough find these days.

The problem with the big boys is that they aren’t exactly cheap.

There may be upside to these estimates, but paying some 20x earnings and 10x EBITDA for OFS doesn’t strike me as a bargain.

One comment that caught me off guard came from Baker Hughes.   They made special note of the growth in offshore activity – saying it is “noticeably strengthening”.

Baker Hughes forecasts “several years of growth” in their international and offshore business.  Quite the statements given that offshore has been left for dead by many.

Those comments led me to do a shallow dive into Transocean (RIG – NASDAQ).
I fully admit I had written off companies like Transocean just like everyone else.

Yet Transocean did $245 million of EBITDA last quarter   On their last call, which was Q2 back in August, Transocean said they saw a “rapid tightening of the offshore market for high capability drilling assets unfolding across multiple regions”.

Yet the stock is barely back to where it was at the end of August and still well off of levels from March to May. 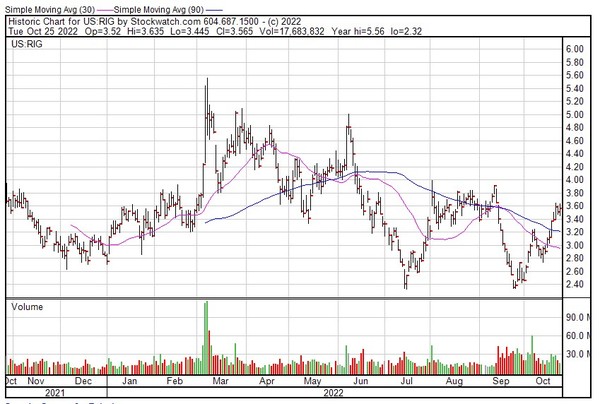 Of course, everyone watching Transocean is worried about the debt.  For good reason.  One year default swaps on Transocean imply about a 1 in 5 chance they default.

Transocean has a lot of debt–$7.2 billion of it.  While they have $2.5 billion of liquidity today, they expect that liquidity to decline to $1.1 billion by December 2023.

Lots to worry about.  But its hard to ignore what they are saying about the business.  A “very constructive outlook”, expecting “further tightening”, and “increasingly healthy day rates” – again this was back in August.  Now Baker Hughes is telling us that the outlook has only gotten better.

WHAT COULD HAVE BEEN

What I would really like is a straightforward bet on international OFS activity.  Fortunately, I know just the name!  Unfortunately, there is a catch.

I owned National Energy Services Reunited (NESR – NASDAQ) as a portfolio company from mid-2020 until the summer of 2021.

This is not a household name, but also not a micro-cap.  You may never had heard of NESR.  But it is one of the largest OFS companies in the Middle East and Asia Pacific region.

NESR is the only publicly traded oilfield service pure play in the region.

You could argue a focus on the Middle East, what with OPEC+ cuts to production, does not play in their favor.

But NESR might make up for it on volume.  In September they announced that they had secured their first multiyear directional drilling contract with Saudi Aramco.  This after they were awarded a $300 million fracturing contract from Aramco in April.

NESR seems in many ways like the ideal play.

The problem, for the moment, is that they have no financials.

In February NESR announced they would have to restate their 2021 financials due to issues with accounts payable and accrued liability accounting.

I’ve always liked the NESR business, and as I said I owned them in the portfolio last year, but I never jump into a stock where I can’t see the numbers.

I am on the lookout for news that the accounting issues are behind them.

In North America, there are 6-10 drillers and frackers in both Canada and the US.  Like the producers, they were priced for bankruptcy and then had GREAT stock runs in 2021.

Energy is slowly getting more respect from generalist funds due to low valuation and return of capital (Share buybacks and dividends). Now energy charts suggest they could run again–but multi-baggers are gone, just like with the producers now.

I’m happy with 50% in a year.  But unless the multiples get up off the mat–most are trading 2-3.5x cash flow–they will need their multiple to almost double as well.  With lower natgas potentially keeping producer cash flows in check, I think we’re at that part of the energy cycle where if it happens anywhere, it can happen in OFS stocks.