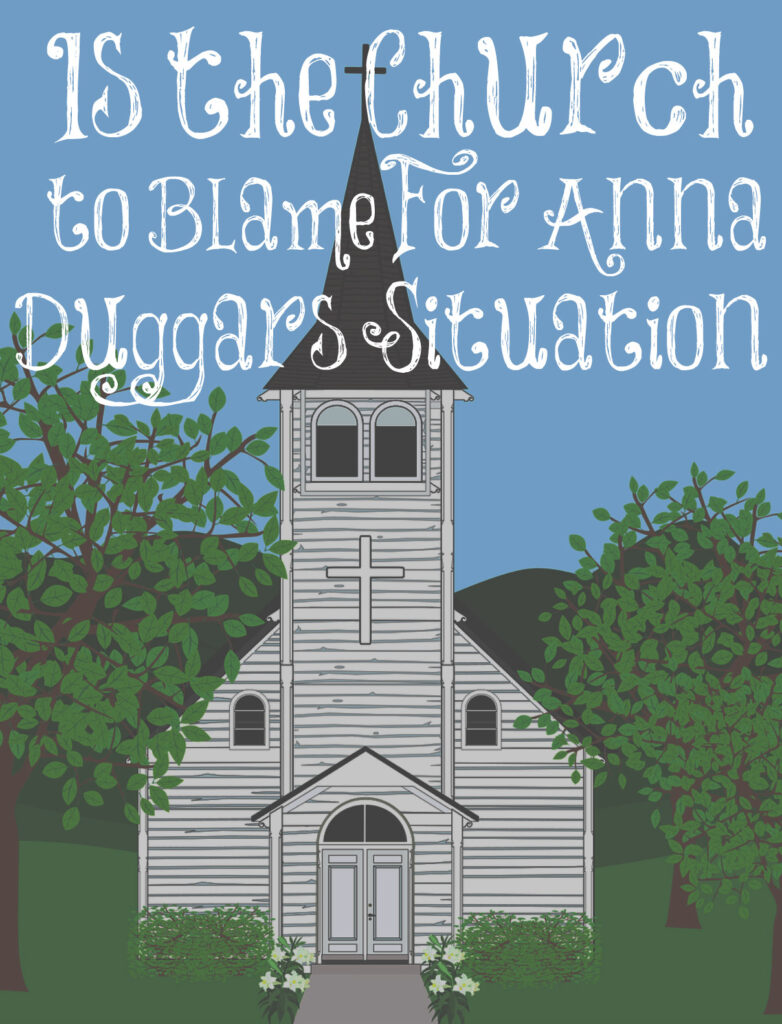 Is the Church to Blame For Anna Duggar’s Situation?

A woman wrote this to me on Facebook yesterday. All of my responses are in parenthesis next to her comments:

I would love to know your thoughts on this?

Anna Duggar did everything right*.

She married with her parent’s blessing. (She honored her parents.)

She saved her first kiss for marriage. (She was sexually pure until marriage.)

She became the ultimate submissive wife. (I don’t think any woman is the “ultimate” submissive wife. You didn’t see what their marriage was like behind closed doors, but I do think she is a godly wife to him.)

She spoke honorably of her husband and always stood by his side. (This is an admirable trait of hers.)

When he committed adultery against her, she forgave him and remained in the marriage despite evidence to show the behavior did not stop. (We do not know if his behavior stopped or not. The trial has not happened yet. She does continue to support him, and he still sees his children.)

She gave him lots and lots of sex and birthed seven children for him. (Yes, she probably didn’t deny him sexually as commanded by God, and they believe that children are a blessing from God!)

She clung to her faith when her marriage began to fall apart, and prayed earnestly for her husband. (Just as 1 Peter 3:1,2 commands her to do.)

Anna did everything right*. And yet, tragically, everything went so, so wrong. Five years after his adulterous secret life was revealed, her husband will be tried on November 30th for charges of receiving and possessing child sex abuse material. (And we don’t know the outcome of this trial. If he is innocent, this will be great. If he is convicted, she will have a huge family to surround and support her. She will also have God with her who promises to never leave nor forsake her.)

While Anna certainly is a victim of her unfaithful husband, let’s not forget she is also a victim of a toxic belief system that has been engrained into her by fundamentalist Christianity for the entirety of her life. (So you’re going to take an example of one fallen, sinful man to say that God’s ways are not perfect? What about Josh’s parents and married siblings who are doing great? What about all of the happily married godly couples who are living according to God’s commands? Does this guarantee no tribulation, suffering, or trials? NO! We are promised all of these.)

How many more stories like Anna need to happen before the fundamentalist church realizes that their messages concerning submission, sex, divorce, purity culture, and patriarchy, aren’t working? (They are working in the vast majority of marriages who live according to the Lord’s will. God’s ways are perfect. You want to rid culture of all of God’s ways due to one sinful, fallen man. You must be a feminist and humanist.)

After all, Anna did everything she was told to do to be guaranteed a safe and happy marriage. Perhaps, maybe, the problem isn’t Anna but instead the fact that she married an abusive man and the church refused to give her the support she needed to remain safe? (No one guaranteed her of a safe and happy marriage. She obeyed God. She will reap many blessings. She will reap what she is sowing. This is an eternal principle. Josh wasn’t an “abusive” man. The sisters in their interview said clearly that they didn’t think he was a rapist nor did he molest them. He “mildly touched them over their clothing.” He was a curious young teenage boy. Yes, this was wrong, and it was dealt with but don’t blow it out of proportion in order to make your unbiblical point.)

When will the church face the fact that the good/godly actions of one spouse cannot change the abusive behavior of another spouse? (Oh, but it can! Read 1 Peter 3:1,2. “Abusive” is way over used these days. Anna never has felt endangered by her husband. He is in bondage to his sexual desire as many men these days are, but she would never say she was abused by him. People like you LOVE to overexaggerate in order to destroy other people’s lives.)

When will they realize that the brazen promises of the purity movement and courtship movement are flawed and empty? (Nope. Being sexually pure before marriage is and will always be God’s best.)

When will the church start telling women like Anna that there is nothing a wife can do to make her abusive husband change? (This isn’t true. Women have won their disobedient husbands without the word by their godly behavior. Carefully read 1 Peter 2 and 3. Isn’t it interesting how feminists always use the word “abusive” in order to pound their point? )

When will they tell her that giving him more sex will not cure his addiction? (I doubt anyone has told her this. Sex doesn’t cure addictions. Jesus Christ cures them!)

When will they tell her that practicing courtship will not divorce-proof or affair-proof her marriage? (No one told her that either.)

When are they going to start telling her that his abuse is not her fault? (How do you know she believes any of this was her fault? You don’t. You have made that up. )

When are they going to tell her that by leaving an abuser and protecting her kids, she is not breaking her marriage vows; after all, he was the one break the covenant? (She is protecting her children but even the judge has allowed Josh to see his children. He must not be abusing them. Have you ever read the story of Hosea? I encourage you to read it.)

When are they going to tell her that God cares about her safety and her children’s safety, and that He created divorce as a means of protecting the vulnerable? (God’s Word never states that divorce is a means of protecting the vulnerable. In fact, divorce was only given for hardened hearts. Anna’s heart is not hardened. She keeps eternity in her vision. She’s fighting for Josh’s eternal soul. It’s a spiritual battle. She understands this.)

Until the church starts changing its message to these victims and stops pointing the blame on them and telling them that they just need to submit more, or pray more, or give him more sex, women will continue to stay in these abusive marriages, believing that it’s God’s will for them and they have no other choice. (We are only responsible for our own behavior and obedience to the Lord Jesus Christ. We aren’t responsible for our spouse’s. Anna is storing many treasures in heaven. Her children are being modeled faithfulness in the midst of great tribulation.)

Josh Duggar is not the only one who needs to be held accountable for their actions, the church does as well. (Churches need to actually speak the Truth of biblical womanhood to women, not the garbage you’re spouting.)

* Right as in what the church told her what was the “right” thing to do in order to please God. Which in reality, is not healthy or safe or true at all. (Anna is greatly pleasing God! God has never promised us a life without trials and hardships, but He does promise that He will never leave nor forsake us. Anna is a godly example to us all.)

Likewise, ye wives, be in subjection to your own husbands; that, if any obey not the word, they also may without the word be won by the conversation of the wives; While they behold your chaste conversation coupled with fear.
1 Peter 3:1,2

Is the Church to Blame For Anna Duggar’s Situation?