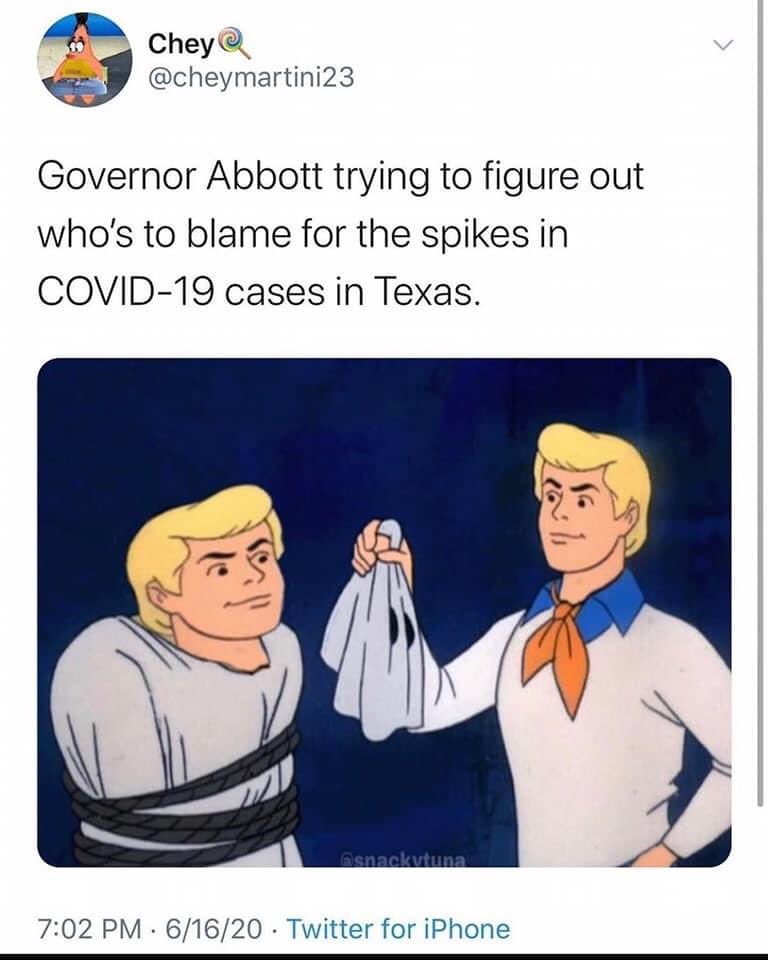 Is there really a primary threat to Abbott?

Maybe, but it’s not a serious one.

As Gov. Greg Abbott races to reopen all businesses and end mask mandates this week, it hasn’t been fast enough to defuse escalating political pressure from fellow Republicans who see Texas lagging behind other states in dropping COVID-19 restrictions.

For months, Abbott has taken barbs from conservatives who have held up Florida Gov. Ron DeSantis as a measuring stick to show Texas is reopening too slowly, fueling talk that Abbott will face something he’s never seen: a real primary battle.

“We are glad Governor Abbott is following the example of Governor Ron DeSantis of FL & Governor Kristi Noem of South Dakota & opening up Texas,” Texas Republican Party Chairman Allen West said last week on his social media accounts after Abbott announced that all businesses would be allowed to reopen to 100 percent this week.

That came days after DeSantis blew Abbott away in an early 2024 presidential primary test ballot at the Conservative Political Action Conference in Orlando, Fla. Asked who their top choice would be if Donald Trump doesn’t run, 43 percent in the straw poll picked DeSantis. Noem finished second with 11 percent. Abbott was the choice of less than 1 percent, finishing 21st among 22 potential candidates.

And then there was January when DeSantis himself was in Austin, less than a mile from the governor’s mansion, touting how he kept his state open despite criticism from the media.

“Florida is open,” said DeSantis, a guest at the Texas Public Policy Foundation at a time businesses in the region were barred from operating at more than 50 percent. “No restriction and mandates from the state of Florida whatsoever. We trust individuals.”

DeSantis lifted Florida’s restrictions in September — a full six months before Abbott made his move in Lubbock last week.

“Greg Abbott certainly is no Ron DeSantis,” former state Sen. Don Huffines, a Republican, said Saturday while standing in front of the Alamo to mark the 185th anniversary of that battle.

Huffines said between Abbott’s handling of the mass statewide power outages and his pandemic response, it is long past time for someone to challenge Abbott in a GOP primary.

“There’s a lot of issues that are going to be discussed in a primary, and those are just two of them,” Huffines said just before delivering a speech before almost 300 people in which he decried governments taking away people’s liberties.

Huffines isn’t ready to declare for the race but said he’s keeping his options open.

Just for clarity, Don Huffines is a one-term State Senator who lost his first re-election bid in 2018 by double digits. Others mentioned in the story include hair salon owner Shelley Luther, who lost her one election in the special for SD30, one of the reddest districts in the state; Jonathan Stickland, widely loathed State Rep who did not run for re-election in 2020; and Florida Man Allen West, a former one-term Congressman who is now somehow the state GOP Chair. If these are the potential opponents, then as someone once said, they’re not sending their best. I seriously doubt Greg Abbott is living in fear of any of these folks.

This story mentions three other potential candidates: Dan Patrick, George P. Bush, and Sid Miller. Patrick, who would be a legitimate threat to Abbott, has said he’s running for re-election. Bush, who would be a lesser threat, has been encouraged by some to run for AG instead. Miller is hard to take seriously in any context, but he’d be a greater threat than the first three. I’d be surprised at this point if any of them ran against Abbott, but I can’t rule it out completely.

I’ll say what I always say in these situations: No one is running until they actually say they’re running. I’m not a Republican and I claim no insight into what their base wants, but there’s no polling evidence at this time to suggest that Abbott is in any trouble with his base. As we have discussed, he is annoyingly popular. Dan Patrick could beat him – it would be a hell of a fight – but I doubt anyone else has a chance. I just don’t think anyone who could make a fight out of it will try. We’ll see.

Is there really a primary threat to Abbott?