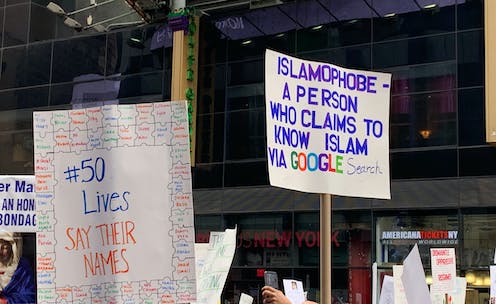 Islamophobia in the US did not start with Trump, but his tweets perpetuate a long history of equating Muslims with terrorism

President Donald Trump retweeted a doctored image of House Speaker Nancy Pelosi wearing a hijab and Senator Chuck Schumer wearing a turban on Jan. 13. In the fake photo, both were seen standing in front of an Iranian flag with a caption saying: “The corrupted Dems trying their best to come to the Ayatollah’s rescue.”

Trump was again criticized for promoting anti-Muslim sentiments and for being a social media troll who spreads false information.

The image was, presumably, meant to criticize Pelosi and other Democrats for questioning Trump’s order to kill the Iranian general Qasem Soleimani by positioning Pelosi and Schumer as defending America’s “enemy” – Iran.

The image portrays the hijab, turban and Iranian flag in a derogatory manner.

It’s not the first time Trump has promoted Islamophobia. With rhetoric like “Islam hates us” and policies such as banning the entry of immigrants from Muslim-majority countries, Trump has reinforced the idea that Islam is a threat to the U.S.

Trump may have brought Islamophobia into the highest office in the land, but American Islamophobia did not originate with Trump. As a scholar of the history of representations of Arabs and Muslims in the U.S. media, I argue that Trump’s tweet plays into a long history of equating Arabs, Muslims and Iranians with terrorism and anti-Americanism.

A series of political events

Representations of Arabs, Muslims and Iranians as terrorists emerged after a series of political events starting in the late 1940s.

In 1947, in the shadow of World War II and the Holocaust, the United Nations proposed that Palestine be partitioned to create the state of Israel. Most Palestinians rejected the U.N.’s proposal, seeing it as a transfer from British to Israeli colonial rule. They questioned why they would forfeit their land to compensate for the genocide committed by Nazi Germany.

Subsequently two Arab-Israeli wars – one in 1948 and another in 1967 – were fought which resulted in the Israeli military occupation of Palestinian territories and the denial of civil rights to Palestinians.

With the objective of recovering their land and bringing attention to their plight, Palestinian groups carried out a series of airplane hijackings. In 1972, at the Munich Olympics, they took members of the Israeli team hostage. These athletes were killed during the rescue attempt.

“At the same time,” points out historian William L. Cleveland, “the Israeli government conducted operations against Palestinian leaders in Europe and Beirut and the Israeli air force killed scores of people in Jordan and Lebanon during its frequent raids.”

What captured the Western world’s attention, however, was Palestinians’ terror activities. U.S. news reports focused on an “Arab enemy” and awe at the capabilities of the Israeli military.

In the U.S., every president since the creation of Israel stated their unequivocal support for the country.

While the terrorist stereotype emerged through the Israeli-Palestinian conflict, it developed an anti-American angle through a series of political events that followed.

In 1973, the Organization of Arab Petroleum Exporting Countries announced an oil embargo against several nations, including the United States, in retaliation for their support for Israel in the 1973 October War with Egypt and Syria. The six-month Arab Oil Embargo led to gas shortages, an increase in heating bills and an economic recession in the U.S.

Soon thereafter, Hollywood films such as the 1976 “Network” and 1981 “Rollover” portrayed rich and greedy oil sheikhs who were a threat to the U.S. economy.

Midcentury developments in Iran, an oil power, contributed to these stereotypes.

In 1953, intelligence services in the U.S and England collaborated to oust the democratic secular prime minister of Iran, Mohammad Mossadegh, because he had nationalized the country’s oil industry, severing the U.S. and U.K. as beneficiaries.

He was succeeded by Mohammed Reza Pahlavi, also known as the shah of Iran, who kept a pro-Western foreign policy and was seen by many as suppressing political opposition. His rule resulted in violent demonstrations. In 1979, he was overthrown in the Islamic Revolution and Ayatollah Khomeini took over as the “supreme leader.”

The overthrown shah, fleeing Iran, entered the U.S. seeking cancer treatment. Iranian students protested by holding U.S. Embassy staff and diplomats hostage for 444 days. They demanded that the shah be returned to stand trial. Known as the “Iran hostage crisis,” it became one of the most widely covered stories in U.S.

As professor of international affairs Melani McAlister’s research shows, it was also a turning point in how Americans saw the Middle East.

News reporting broadcast Iranian students burning the American flag and chanting “Death to America.” This reporting conflated Iran with Arabs and Islam in general. Iran also came to symbolize, as McAlister points out, virulent anti-Americanism and a threat to the U.S.

The late scholar Edward Said, in his book on the Iran hostage crisis, documents how scholars and journalists cast Islam as a threat to the West by explaining the crisis as resulting from a “Shi’a penchant for martyrdom” and “the Islamic mentality.”

Hollywood, again, furthered the conflation of Islam and terrorism. Films like “Not Without My Daughter,” about an American woman taken hostage by her husband and his primitive religion, Islam, and “Argo,” about the hostage crisis, depicted Iranians as unreasonable fanatical people.

The terrorist attacks in the U.S. on Sept. 11, 2001 entrenched this decades-long narrative of Arabs, Iranians and Muslims – as a conflated category – as the enemy.

Following President Trump’s retweet, White House Press Secretary Stephanie Grisham was asked, “Why would the president take even the time to retweet something like this?” Grisham responded, “I think the president was making the point that the Democrats seem to hate him so much that they’re willing to be on the side of countries and leadership of countries who want to kill Americans.”

Both President Trump’s retweet and this rebuttal tap into the deep-seated U.S. perception that Islam, Arabs and Iran are a threat to the U.S.

[ You’re too busy to read everything. We get it. That’s why we’ve got a weekly newsletter. Sign up for good Sunday reading. ]

Evelyn Alsultany does not work for, consult, own shares in or receive funding from any company or organisation that would benefit from this article, and has disclosed no relevant affiliations beyond their academic appointment.

Islamophobia in the US did not start with Trump, but his tweets perpetuate a long history of equating Muslims with terrorism