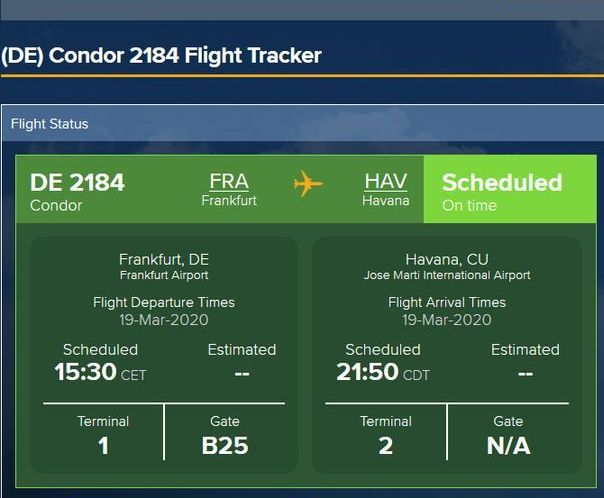 Last November after returning from Cuba I booked my next HAV flight for 19th March – today.

I’d be in Havana usually February for the Habanos Festival, but after 15 years I felt I don’t need another one – so I thought March would be quieter.

After returning from Hong Kong last December, the news of the Covid-19 ( Wuhan Coronavirus back then ) started to spread increasingly rapidly.

While many disregarded the risk posed by this virus as overblown alarmist hype and said this was no worse than a “seasonal flu” I remembered the SARS outbreak when I was still active as a crew-member and found reason to worry.

“From an Aviation forum I follow – quite disturbing scenario :

now infectious and is shedding virus but is currently asymptomatic –

had left Wuhan and made way to Chengdu.

Flies on widebody from Chengdu with 240 other pax

Next day wakes up with what could be a cold…..

Yes you can possibly trace the flights – but how many did our notional ‘patient zero’ actually manage to pass the infection to- not only on the flights?

How many did they manage to pass the infection to 2 days after they were infected until they realized they were sick?

Imagine a couple of immigration border protection officers that are infective handling hundreds of passports a day and giving them back.

This is the reason for the world being a little on edge.

The spread of a modern equivalent to the 1918 ‘Spanish Flu’ would be infinitely faster and further.

A lot depends on how infectious the disease is, some diseases need less than 10 infectious particles others require thousands.”

As Covid 19 reached Europe and it became clear that it was a global pandemic I mentally cancelled my HAV flight in late February.

After the German Foreign Office warned and then prohibited all flights, the EU closed its borders and Germany started evacuating citizens from the Caribbean I formally cancelled my booking.

And to correct a misconception : I do NOT fly for a “fraction” – I pay the FULL price for my Condor ticket. Only at Lufthansa do I get a staff discount – Condor is NOT part of LH. I pay the full price like anyone else.

While we follow the gvt’s instructions and stay at home, avoid contact etc., while Lufthansa is evacuating people from the Caribbean and worldwide, while Cuba reports infections and is ill prepared for an outbreak, I checked just now, 90 minutes before take off and that HAV flight is still operating….

Irresponsible and bottomless stupidity is what comes to my mind.

I see them screaming in 2 days to be evacuated back home again.

Anyone still flying last 10 days DESERVES to be stranded and become a Darwin Award GOLD member….