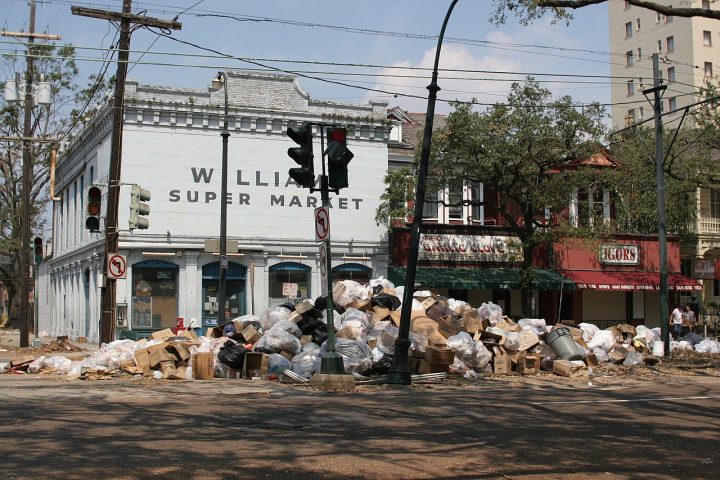 Reflections from New Orleans, Louisiana—the US's most African city—on the economic fallout from the coronavirus pandemic.

I am from Lagos in Nigeria. Lagos is a port city, the most populous in Nigeria and one of the fastest-growing cities in the world. I now live in another port city, New Orleans, Louisiana. Where I live in New Orleans, we’re on the cusp of something … ordinary. We’re in a moment that feels different but evokes sameness; the tree birds are chattering as remarkably as yesterday, even if the pace of our world has slowed. There are fewer cars, and less pedestrians on the streets, but Westworld just premiered its new season on HBO and take-out is still available.

But our social lives, relatively intact though scaled back because of the virus, have the opposite fortunes of our devastated economic life. The virus is erasing the wider economy, and specific sectors, like the restaurant industry, have been decimated. Because our social and economic lives are intertwined, we feel the current economic disruption deep in the marrow.

Some of us, the middle class and affluent, are facing the sort of existential uncertainty we usually defer until death or illness. While others, those of us already heavily policed by the state—immigrants, the working class, black and brown bodies—are facing the same ambiguous existence we’ve always known, except the moment is compounded by everyone else’s anxieties. But the future isn’t as inscrutable as we fear. There are at least two ways to be clairvoyant, by examining history and observing contemporary but parallel realities.

Right after 9/11, there was significant shuddering at what the future would look like. And when it came, it was what some of us already knew: hyper surveillance and militarized security. For much of white America the changes were invisible, like the suspension of habeas corpus to foreigners, allowing the indefinite detention of “enemy combatants,” the No Fly List which put restrictions on many Muslim sounding travelers long before the Muslim Ban, and electronic eavesdropping on US citizens.

And the most visible changes were initially shocking but soberly accepted among Americans: National Guard personnel armed with assault rifles arrived at airports, stoically preserving our peace with their frightening presence. Military presence in US airports has receded since, but vestiges of our former fear remain in the security screening process, K-9 patrols, and the occasional weapon-bearing military person. Today, our social lives have adjusted robustly to this new normal, because our economic lives are intact.

While 9/11 produced war and global surveillance, it was also an attack on the American psyche, symbolically represented by the financial industry. America’s greatest act of social defiance was to reignite its economic motor. Ergo the $15b bailout to the airline industry and other billions spent across various economic sectors. America’s response was captured perfectly by George W. Bush a few weeks after 9/11 when he said, “Get down to Disney World in Florida. Take your families and enjoy life, the way we want it to be enjoyed.” After all, our social lives only find meaning in consumption: it was business as usual.

If 9/11 offers a broad perspective on the doggedness of the US economic system and the social adaptability of Americans, ever accommodating as long as commerce and consumption remain uninterrupted, then Hurricane Katrina is a site specific example of what happens when the world completely changes but everything remains the same. Because, while Katrina temporarily sunk New Orleans’ restaurant industry, the city rebounded spectacularly.

Katrina was such a comprehensive disaster that the end of the city seemed more possible than a recovery. Before the hurricane, tourism, with visitor spending predominantly anchored by hotels and restaurants visits, contributed about $6 billion to the city’s economy, funding a third of the city’s operating budget. Immediately following Katrina The New York Times reported only about three or four restaurants of the city’s estimated 3,400 were still functioning. The economic cost to New Orleans was about $75 billion, the human loss stood at 1,200 people (or more). For restaurants in particular the situation was remarkably dire.

Ten years later, Mayor Mitch Landrieu in his 2015 State of the City Address would say “… we are in the midst of a retail and restaurant boom.” He was right. New Orleans is back to normal and even more prosperous than before: economic output has grown by about 26 percent since Katrina and tourism spending has jumped by around 50 percent, reaching a record $9b in 2018. Restaurants have rebounded spectacularly, growing by 24 percent since Katrina. While the general economic trends have been positive, the specific rewards are uneven, with black New Orleanians benefitting the least. The economic distance between black and white New Orleans began before the hurricane and picked up right after. More than 75,000 of the 175,000 Black New Orleanians who fled the city after Katrina never returned. Today the share of black residents has dropped from 67 percent to 59 percent, and half of all black households earn less then $23,237 per year. In the restaurant industry specifically, black workers are more likely to be clustered in low wage jobs while “the highest paid occupations in the full-service restaurant industry are disproportionately filled by white workers.” And to remove any doubt that everything equilibrates back to inequality in the US, whether for labor or employer, let this pre-Katrina statistic, which persists still, marinate in your spirit: minority-owned businesses, which make up about 40 percent of all businesses in New Orleans, only receive 2 percent of total sales receipts.

The coronavirus pandemic is as much a public healthcare crisis as it is an economic crisis, without precedent yet parallel to Katrina. The coronavirus pandemic has brought with it the same desperate calls for federal aid, including for the restaurant industry, that was widespread during Katrina. Now as with then, everyone acknowledges “the early and strong role of the federal government is critical in these mega-catastrophes.”

But, as usually happens in disorienting times like these, there is an intermediary step. Spurred by a desire to be helpful and faith in the free market, private citizens, businesses, and civic actors mobilized to take action. Restaurant kitchens were reconfigured into community resource hubs and kitchens. Formerly restricted content from food sections of publications like the New York Times emerged from behind paywalls to offer recipes for free. Big food and beverage brands, like Patron tequila, created emergency relief funds to assist restaurant workers. And individuals generously contributed to crowdfunding campaigns, supporting restaurants and their workers.

But as usually happens, both free market and philanthropic responses are ultimately impotent in the face of systemic crises—philanthropy itself a consequence not a solution for problems arising from the free market. All these efforts are a precursor to government relief.

The loose set of collective demands from restaurants were twofold. For their employees, they asked the government to stabilize incomes by offering paid sick leave and expanding unemployment benefits. For themselves they sought cost abatement and capital injection through rent relief, low to zero percent interest loans, debt forgiveness, and tax suspensions and holidays. On March 27, 2020, the government speedily obliged when the President signed a $2T relief package. It goes a long way to meet the demands, but falls short of industry specific relief that would recapitalize restaurants. Without additional intervention it seems many restaurants will die. But what exactly does this mean?

The restaurant industry is one where labor is segregated by race and gender, underpaid and uninsured. An industry fed largely by an industrial agricultural system that either extracts profits from the environment with little consequences, or offers ethically sourced produced to just a few for a lot. An industry where on the higher end is great food at fat prices in spaces that drive up real estate values, pushing property prices higher and poorer people further. And on the lower scale, working poor people, making barely enough to keep them going, serve low nutrition meals to other working poor people, who can’t afford quality housing because of predatory development. Let it die.

This old god prioritizes the capital of a few people over the labor and lives of many. Relief keeps the status quo intact by taxing workers to subsidize owners. Stimulus checks and unemployment benefits offered to workers will be used to finance consumption (rent, food, healthcare, etc), which only concentrates wealth with the owners of these services. Similarly government guaranteed loans or grants to business owners are essentially the government financing the capital expenditure of businesses. Capital expenditure is money spent by owners to acquire or maintain assets. Assets generate returns. What is wealth if not this: the sedimented, accrual of returns, pressed down, shaken together and running over?

Americans famously say “there’s no such thing as a free lunch” yet we don’t always abide this axiom. This very American stimulus package is an “eat now, pay later,” relief for restaurant workers. Deficit spending, which this relief bill is, is financed by future tax increases, or service cuts or future borrowing or future inflation, which means future interest rate hikes and increased borrowing costs for workers (and owners).

Instead of this relief bill, we should be demanding a new system that works for owners and workers alike, one that provides quality housing, healthcare, food, childcare, education, leisure, and work. Instead of bailing out restaurants, we should make people whole.

We need a fiscal policy that does three things. First it should include reparations: repaying historical debts to African Americans and Indigenous People. There is precedent for this: The US government paid interned Japanese Americans, and land dispossessed Alaskan Natives. Internationally, Germany made reparation payments to Israel for the Holocaust.

Second the policy must eliminate poverty for all US residents. One option is by instituting a Federal Jobs Guarantee which would achieve full national employment by providing jobs to all working age residents, with accompanying benefits including healthcare, childcare, paid family and sick leave and vacation. This creates a competitive labor market that eliminates exploitation. The government did this during the Great Depression.

Finally the policy must equalize opportunity for the next generation through “baby bonds,” which are trusts endowed by the government and given to each child at birth. The amount disbursed is based on the wealth position of the child’s family. The trust grows at a guaranteed rate of return and matures when the child reaches voting age. At maturity the trust will be restricted to asset building expenditures, like tertiary education and home ownership.

These three policy recommendations as packaged together are the product of long study by structural economist William Sandy Darrity whose research on racial wealth disparity proves that working the margins herds everyone towards safety.

These measures would fit neatly into the Green New Deal, a legislative proposal that tackles climate crises and economic inequality. Whether all of this is the exact answer is irrelevant. This historic moment calls for a complete retooling of our economic system—not a cheap resurrection of the old master.