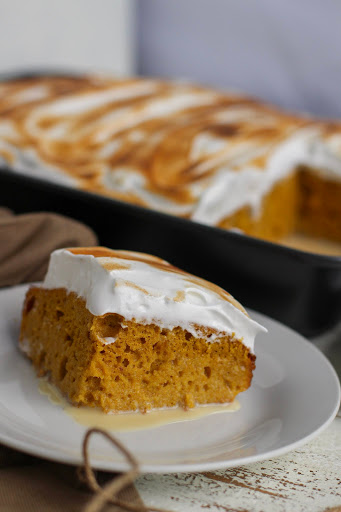 This recipe is for everyone that brines their Thanksgiving turkey in Cuban mojo. For the children and grandchildren of immigrants who’s Thanksgiving meals include side dishes from their parent’s homeland like pupusas, frijoles negros, yuca or gallo pinto. As a second generation immigrant myself, traditionally American celebrations always call for a marriage of both American food and food from my parent’s country of origin. I am forever caught between the country that I have called home my entire life and the culture/traditions my parents have passed down to me and want to make sure are not lost in assimilation. To me, a Thanksgiving meal is not complete without a pumpkin pie and the Macy’s parade. However, my mom scoffs at the idea of a pie served on Thanksgiving that is made from pumpkin, her exact words are, “Pie de Calabaza?! Mija, eso no es comida!” So there is always a flan or arroz con leche next to my pumpkin pie. 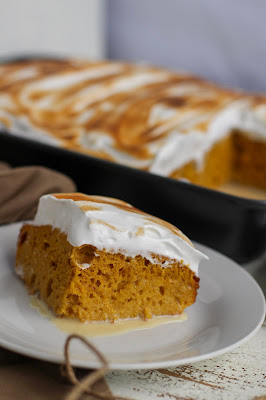 Being born in the US to immigrant parents, I’m caught between two cultures. I’ve assimilated to life in the US and I always find myself incorporating aspects of my heritage into everyday life. Whether it’s the way we drive or literal translations to Hispanic idioms, our culture is engrained in everything we do. Nowhere is this more evident than in the food we eat. We (second and third generation immigrants) take traditionally American foods or holidays and give them an immigrant twist by mixing in our roots. As South Florida’s dining scene evolves, we’re even starting to see this in dishes around town like Pastelito Papi’s peanut butter and jelly pastelito or Ariete’s frita egg’s benedict.

This year, I’m making a pumpkin pie tres leches with torched maple meringue. This will be my attempt to win over my mother and show her calabaza ain’t so bad. The fact that there’s a quarter cup of bourbon in the recipe, also helps soften the blow. 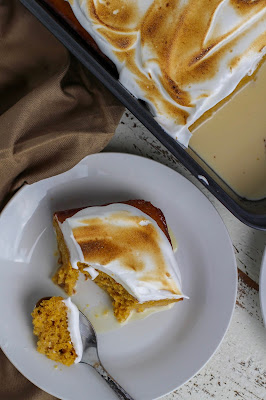 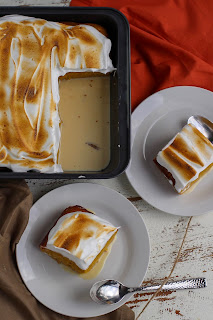 Preheat oven to 350°F.
Line the bottom of a  9 x 13 baking pan with nonstick baking spray and set aside. Separate the egg yolks and whites. Beat the whites until very foamy and frothy and set aside. In a large mixing bowl, cream the sugar, egg yolks, and vanilla extract and bourbon with an electric mixer.
Continue mixing and slowly add the milk and pumpkin puree. Slowly add the flour, salt, baking powder, baking soda, cinnamon, nutmeg, ginger and cloves until all the dry ingredients are incorporated and the batter is smooth. Finally, use a spatula to gently fold in the beaten egg whites until mixed. 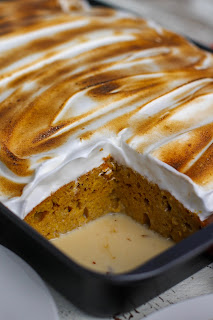 Pour batter into a prepared 9 x 13 baking dish. Bake for 40 minutes, or until a toothpick comes out clean. Allow cake to cool for 25 minutes.

Use a skewer or knife to pierce holes throughout the cake. Whisk together the sweetened condensed milk, evaporated milk, heavy cream and bourhon in a mixing bowl. Pour the milk mixture over the cake a little at a time, until it soaks through.  Keep doing this until most of the milk syrup is absorbed. Cover the now milk-drenched cake in and refrigerate for at least 2-3 hours before frosting. 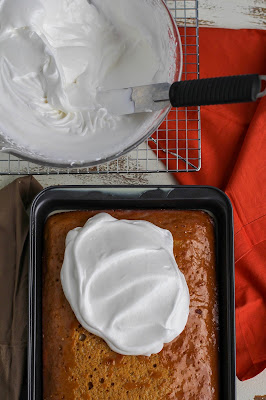 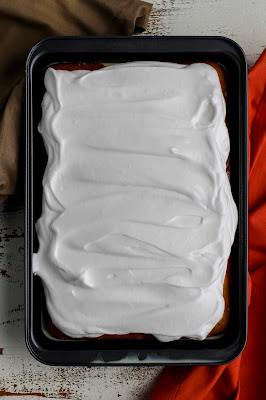 Let frosting cool in refrigerator. With a wet spatula, spread a thick layer of the frosting on the cake. At this point, you can serve the cake as is or you can lightly torch the top of your meringue with a handheld blowtorch. 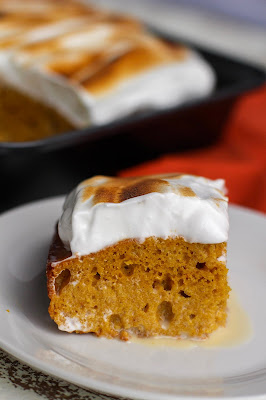