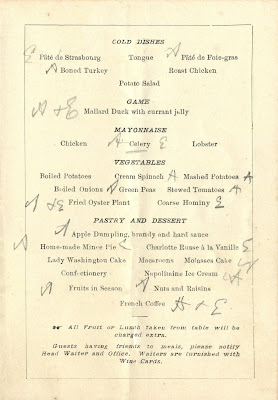 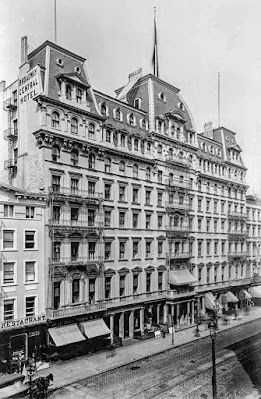 Menus are generally the only documents that speak to how people dined outside the home in the nineteenth century. However, it nearly impossible to have a visceral sense for a list of dishes from a bygone era, especially when you are removed by over a hundred years of radical changes. On rare occasions, patrons marked the dishes they ordered, thereby enriching the historical evidence. An annotated menu from the Grand Central Hotel in New York provides a case in point, showing what two guests ordered for dinner on Sunday evening, February 12, 1882. The anonymous diners, identified simply as “A” and “E,” clearly understood the nuances of the menu and took full advantage of the opportunity. 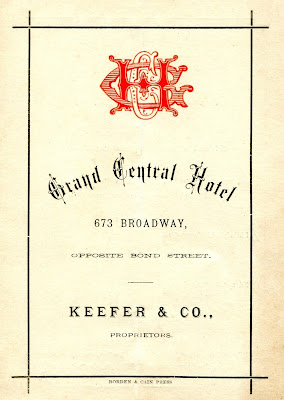 The Grand Central was located on Broadway, near Bleeker Street. Opened in 1870, the building was distinguished by elaborate mansards with dormers in the French Second Empire style.1 Its cuisine ranked a notch below below the city’s finest establishments.2 The hotel operated on the American plan which included breakfast, lunch and dinner in the daily rate. The typical table d’hôte menu below is organized under ten headings—Soup, Fish, Releves, Entrées, Roast, Cold Dishes, Game, Mayonnaise, Vegetables, and Pastry & Dessert. 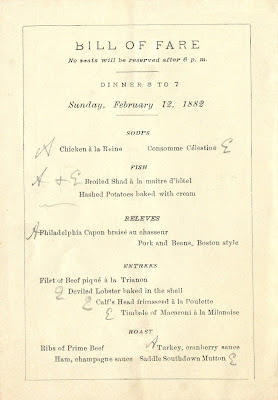 Soup
The two soups changed every day with the most delicate ones being reserved for Sundays and holidays. Célestine is a crystal-clear consommé that contains a sliced crepe that acts as a noodle. It was favored for Sunday dinners in country homes in France.
Guest A: Chicken à la Reine
Guest E: Consommé Célestine
Fish
The Grand Central routinely had one fish on its bill of fare, whereas luxury hotels offered a choice of two such dishes. Given the mid-February timing, the shad may have been the first of the season, marking an annual culinary event. The mild and buttery fish was accompanied by hashed potatoes baked in cream.
Guests A & E: Broiled Shad à la maître d’hôtel
Releves
During the week, there was a category called “Boiled” that contained meat dishes such as corned beef and cabbage. On Sunday, it was replaced by special entrées known as relevés. In addition to making the menu appear more opulent, this section provided an opportunity to upgrade pork and beans which was traditionally served for Sunday dinner in New England. Unmoved by this marketing ploy to promote a low-cost mainstay, guest “A” opted for the capon braised with mushrooms, wine, and parsley in the hunter style. Since the relevé was not a separate course per se, it could be ordered in lieu of a regular entrée.
Guest A: Philadelphia Capon, brasé, au Chasseur
Entrées
The entrées were the most refined and elaborate dishes, reflecting class of the establishment. Unlike today, the entrées were regarded as side dishes and not the main course.3 They were prepared using moist cooking methods, such as sautés, ragoûts, and fricassées. These dishes were frequently described with a smattering of French and arranged in a sequence that followed a loose pattern. The most prestigious preparation was often shown first. On most days, there was a macaroni dish prepared in one of four ways—au gratin au Parmesan, a l’Italienne , à la Neapolitaine, or à la Milanaise. The last entrée was customarily a hot sweet entremets, such as apple fritters with rum sauce or rice cakes with lemon sauce. Oddly, no such dish appears on this menu. Guest “E” ordered three entrées, indicating the portions may have been relatively small.
Guest E: Deviled Lobster baked in shell
Guest E: Calf’s Head, fricasseed, à la Poulette
Guest E: Timbale of Macaroni à la Milanaise
Roast
No course reinforced the theme of abundance more than the roasts, the foundation upon which the American menu was built. Of the four commonplace roasts on this menu, ribs of beef and ham with Champagne sauce were daily fixtures on hotel menus across the country. The other roasts were also frequently available, although somewhat less often.4
Guest A: Turkey with Cranberry Sauce
Guest E: Saddle Southdown Mutton

Cold Dishes
The menu on Sunday featured pâtés made with fat goose liver and truffles, taking the place of the more mundane cold dishes like roast beef, beef tongue, and lamb.
Guest A: Pâté de Foie-gras
Guest A: Boned Turkey
Guest E: Pâté de Strasbourg
Game
A game dish was offered during the hunting season which ran from September to about mid-March. Mallard duck was one of the most common game dishes at this time of year.
Guests A & E: Mallard Duck with currant jelly
Mayonnaise
The format of the table d’hôte menu was continuously evolving. “Mayonnaise” was a new category that first appeared in the early 1880s.
Guests A & E: Celery [Salad]
Vegetables
By custom, the vegetables was minimally described. There was usually no any indication as to whether they were canned or fresh, except for a few weeks in the summer when the corn was called “green” and some of the others were described as “new.” The selection of eight to ten vegetables almost always included potatoes, onions, and stewed tomatoes. Their lowly position on the bill of fare did not represent their place in the service. The vegetables may have been served with the roast.
Guest A: Fried Oyster Plant
Guest A: Cream Spinach
Guest A: Green Peas
Guest A: Stewed Tomatoes
Guest E: Fried Oyster Plant
Guest E: Coarse Hominy
Pastry & Dessert
Beginning in the early 1880s, the pastries and desserts were shown under one heading. Previously, a separate section called “Pastry” offered a selection of puddings, pies, tarts, cakes, creams, blancmanges, jellies, and meringues; the “Dessert” category was confined to fruit, nuts, and an ice cream or two. Neapolitan ice cream was a seldom seen flavor reserved for an occasional Sunday or holiday. Charlotte Russe was a special sweet dish that customarily appeared on Sunday menus. Interestingly, the mince pie is called “home-made,” a rarely-used descriptor that literally meant it was not made on the premises. Still, it may have been a house specialty. Guest “A” ordered six sweet dishes, some of which may have been plated as a little of this, and a little of that, similar to how such an assortment would be served from dessert cart  today. On Sunday, the Grand Central offered “French coffee” instead of its regular brew.
Guest A: Apple Dumpling, brandy and hard sauce
Guest A: Molasses Cake
Guest A: Napolitaine Ice Cream
Guest A: Fruits
Guest A: Nuts and Raisins
Guests A & E: Homemade Mince Pie
Guest E: Charlotte Russe a la Vanille
Guests A & E: French Coffee
Table d’hôte menus were lavish in a way that encapsulated societal aspirations and ideals. Such cultural positioning was achieved by offering large quantities of food as a symbol of abundance and by the inclusion of French cuisine. However, the chefs also needed to contain costs. Menus regularly included dishes that consumed the ingredients left over from previous meals. Nothing was wasted. And inexpensive dishes, such as macaroni and pork and beans, were ubiquitous.5 Portion sizes were also smaller than commonly supposed, although this stratagem did not always work as intended. Astonishingly, of the 42 items on this menu, the two guests ordered 19 and 15 dishes, respectively.
Notes
1. The Grand Central Hotel gained notoriety in 1872 as the site of the murder of financier James "Big Jim" Fisk, a flamboyant robber baron of the Gilded Age. The hotel is also remembered as the place where eight baseball teams formed in February 1876, eventually becoming the National League of Major League Baseball.
2. Sunday dinners at the Grand Central became decidedly less grand in the decade following its opening. A menu from a Sunday dinner in 1872 shows a choice of two fish, nine side dishes (entrées), and eight roasts, compared this menu from 1882 that features one fish, six relevés/entrées, and four roasts. Despite this downward trend, the Grand Central never adopted the section titled “Relishes,” a category some hotels used to make their table d’hôte menu appear larger and more generous.
3. Entrées were often called “side dishes” on American menus in the 1850s and 1860s, and were still being called by that name at the Grand Central Hotel as late as 1872.
4. The ubiquity of roasts on American hotel menus begs the question as to whether such vast arrays of meat dishes were was actually available every day, especially at middling establishments.
5. Freedman, Paul. “American Restaurants and Cuisine in the Mid-Nineteenth Century.” New England Quarterly 84 (2011): 1–55 5.
6. The menu was printed by Borden & Cain at 46 West Broadway, a specially press that produced weekly and daily menus for over 35 hotels and restaurants, including Delmonico’s, the St. Nicholas Hotel, the Union Square Hotel, and Taylor’s Saloon, the renowned women’s restaurant in the St. Denis Hotel on Broadway at East 11th Street.
Source: theamericanmenu.com