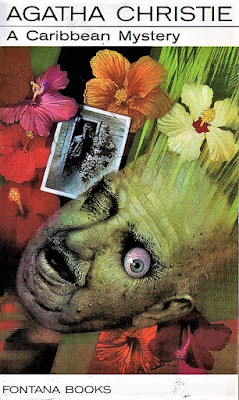 What Would Christie Do? Judge Her by Her Works, Part One

At a screening of The ABC Murders in December of last year, scripter Sarah Phelps dismissed as "manufactured outrage" all the complaints from Agatha Christie traditionalists about the massive alterations of Christie's works in Phelps' recent adaptations.  Conceding that in her books the Queen of Crime "might not have written any sex or swearing or drug-taking and whatever," Phelps nevertheless declared, "I'm sure she would have if she could."

Evidently Phelps in making this declaration is relying on her self-professed knowledge of the "secret, sinister" Agatha whom she has divined (see my last post), the one who would have enjoyed using the, erm, more forthright four-letter words and who, "if she could," would have included in her books such Phelps scripted scenes as these from The ABC Murders, described in a revolted article in The Atlantic:

Phelps has taken the grande dame of drawing room detective fiction and made her stories so grotesque, so deranged, that they're almost comical.  The low point for me in The ABC Murders...was the focus on a yellow, pus-filled boil on the back of a man's neck--so yellow it seemed almost to vibrate on camera--as another man grimly spears open the yolk of his fried egg.  In another scene, the actor Shirley Henderson's character, lipstick smeared all over her face, berates the daughter she rents out to men for a shilling, screeching, "I wish I'd used a knitting needle on you."

....Phelps has dreamed [additional scenes] featuring the use of high heels and silk stockings in sexualized torture rituals....It might seem unimaginable in Christie's genteel but biting stories to insert, say, a visual of an overflowing receptacle of urine.  Not for Phelps, though, who's now used this motif twice, in The ABC Murders as well in the grimly vicious Ordeal by Innocence.

These are the adaptations which have prompted Christie great-grandson James Pritchard not to high dudgeon but to a meek thanks to Phelps for having helped him learn "a lot about my great-grandmother's work...."  He adds: "I now read it differently."  Oh, my dear James, I'm afraid you've been led up the garden.

Instead of looking for subtextual clues to this putative "secret, sinister" Agatha--the Agatha whom Phelps feels sure wanted really to write about stiletto-heeled sadists, pus-filled boils and overflowing urine--why not look at the words Christie actually wrote right up front in her books, words which seem to make clear how she felt about such matters?

Here is, I think, the voice of Christie, expressed through Miss Marple, on modern novels in her detective novel A Caribbean Mystery (1964):

She thought, on the whole, that [her nephew Raymond West] was fond of her--he always had been--in a slightly exasperated and contemptuous way!  Always trying to bring her up to date.  Sending her books to read.  Modern novels.  So difficult--all about such unpleasant people, doing such very odd things and not, apparently, even enjoying them.  "Sex" as a word had not been mentioned in Miss Marple's young days, but there had been plenty of it--not talked about so much--but enjoyed far more than nowadays, or so it seemed to her.  Though usually labeled Sin, she couldn't help feeling that that was preferable to what it seemed to be nowadays--a kind of Duty.

Her glance strayed for a moment to the book lying on her lap open at page twenty-three which was as far as she had got (and indeed as far as she felt like getting!):

"Do you mean that you've had no sexual experience at ALL?" demanded the young man incredulously.  "At nineteen?  But you must.  It's vital."

The girl hung her head unhappily, her straight, greasy hair fell forward over her face.

He looked at her, the stained jersey, the bare feet, the dirty toe nails, the smell of rancid fat....He wondered why he found her so maddeningly attractive.

Miss Marple wondered too.  And really!  To have sex experience urged on you exactly as if it was an iron tonic.  Poor young things....

"My dead Aunt Jane, why must you bury your head in the sand like a very delightful ostrich.  All bound up in this idyllic rural life of yours.  REAL LIFE--that's what matters."

Thus Raymond.  And his Aunt Jane had looked properly abashed and said "Yes," she was afraid she was rather old-fashioned.

Though really rural life was far from idyllic.  People like Raymond were so ignorant.  In the course of her duties in a country parish, Jane Marple had acquired quite a comprehensive knowledge of the facts of rural life.  She had no urge to talk about them, far less to write about them--but she knew them.  Plenty of sex, natural and unnatural.  Rape, incest, perversion of all kinds.  (Some kinds, indeed, that even the clever young men from Oxford who wrote about books didn't seem to have heard about.)


It's hard for me not to see this passage as a defense by Christie of the so-called "cozy" style of crime writing against all the postwar up-and-comers who had gained ground since the Second World War.  People like the hard-boiled writers and the noirists, such as Patrica Highsmith and Jim Thompson, who did focus on the seamy side of life (and death).  Christie is saying, look, I know all about the nasty side of life, but I choose not to write about it, at least not explicitly.  And she utterly rejected Phelps's squalid nihilism.

Although Christie then was a worldwide bestseller, before people like myself (and I assume Ms. Phelps) were born, there nevertheless were plenty of smart critics condemning Christie for being old-fashioned and out-of-touch with the unpleasant realities that everyone allegedly wanted to read about in the Atomic Age.  Of course the truth is that a lot of people didn't want to read about those things, which I why they read Agatha Christie, and Patricia Wentworth, and Ngaio Marsh, and Michael Innes, and John Dickson Carr, and Rex Stout and Ellery Queen.  It doesn't mean, by the way, that these works were all anodyne and insubstantial, but it does mean that in them one won't be reading about the sort of repulsive nastiness which so obviously intrigues Sarah Phelps and many television reviewers.

Sure, Christie got tired of Hercule Poirot, with all his arguably forced Belgian whimsy and his artificial mannerisms and--don't discount this--his devilishly difficult to write clue puzzles.  For relief from Poirot, Christie turned to the standalone mysteries, Tommy and Tuppence (still rather jolly, if superannuated) and, most of all, Miss Marple, the country-est and coziest of her sleuths.  Miss Marple, who started off representing her mother's and grandmother's generations, more and more came to represent the author herself.

Even some of the Marples have dark threads in the cozy quilt, however.  I've always found the posthumously published Sleeping Murder, which I believe would have been called Cover Her Face had PD James not preempted Christie with her debut 1962 mystery, highly sinister.  (Since Phelps likes portraying sex perversion so much, this one should have been a natural for her.)

But it's not just the explicit sexuality and four-letter words in Phelps' adaptations which would have bothered Christie so much, it's the the determined ugliness and irredeemably hateful view of human nature.  Look at that above quotation from A Caribbean Mystery again.

What bothered Christie about the modern novels which she lampoons wasn't so much the sex per se, but the gloomy squalidness of it all.  Look how she complains about that poor young woman's greasy straight hair and rancid fat and dirty toe nails.  If she's going to get it on, Christie must have been thinking, why can't she at least bathe first and brush her hair?  But, most of all, having sex, if you're going to do it, is something to be enjoyed  (and it helps if neither partner smells).  People didn't seem to enjoy sex, or anything else, in modern novels.  Just like they don't in Phelps' film adaptations of Christie's novels, where everyone seems determined to be miserable.

I may be beating a dead (pale) horse at this point, but to say that these adaptations represent the sort of thing Christie really wanted to write strikes me as damnably disingenuous.  Were the Queen of Crime resurrected and given a choice between writing Phelps' sort of nasty, nihilistic noir or modern-day cozy cat crimes, I think the meows most definitely would have it.
Source: thepassingtramp

What Would Christie Do? Judge Her by Her Works, Part One