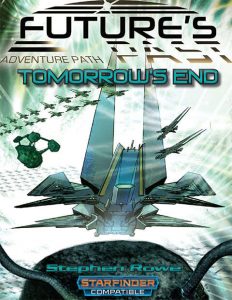 The finale of the Future‘s Past AP clocks in at 30 pages, 1 page front cover, 1 page editorial, 1 page SRD, 1 page back cover, leaving us with 26 pages of content, so let’s take a look!

This module was moved up in my reviewing queue as a prioritized review at the request of m patreon supporters.

…to be frank, not that moving this one up would have really needed coaxing. The module is for 5th level characters, and concludes the Future’s Past AP. This is not a module you can run as a stand-alone offering without losing its impact, which is also why I’ll deviate somewhat from my usual format for reviews, and instead note something important:

The Future’s Past AP, in many ways, is one I’d recommend for experienced GMs, but it is one that also has an intrinsic teaching angle integrated into its structure: The initial two adventures started off in a way that was more conventional and should be easy to run for less experienced GMs; part III and IV progressively built on that, slowly taking away the training wheels and going more and more into freer-form structures that emphasize player agenda above linear presentation of a projected plot. This module, then, is the final exam, the graduation of the GM into a scenario so epic in scope and versatile in its possibilities, anything short of an open presentation would be doomed to failure.

You see, while the structure of the module is very much one of a linear sequence of events, the scale or scales on which these events happen and their precise nature are very much open to the preferences of the respective group playing this adventure. The module does come with read-aloud text. That being said, this module does require preparation; like the remainder of the AP, you cannot run this spontaneously. Frankly, though? I’ve rarely had as much as joy preparing a module as I did with this one.

Why? Well, know how the previous modules in the AP sent shivers down my spine?

Guess what? This one genuinely managed to outdo them. The prose is fantastic, and even the non-read-aloud text, in many instances, is quality-wise on a level that outperforms the vast majority of readaloud texts. I am not kidding. And before you ask: This is not a victim of failed-novelist-syndrome; it may sport phenomenal prose, but it’s also very concise, precise. It doesn’t waste words or pages.

Okay, in order to go into more detail, I will need to dive into SPOILERS. Potential players should jump ahead to the conclusion. No seriously. If you spoil this series for yourself, you’ll be missing out on what might be the best adventure saga for SFRPG to date.

Okay, only GMs around? Take in this introductory text:

“Déjà vu implies some uncertainty. This is more like a recurring

The distant stars twinkle, as if obscured by a thickening sphere of

dust, the size of a solar system.

Then, the galaxy disappears entirely.

Illuminated by the light of dimensional rifts, ships gradually take

shape within the cloud. Some seem miles long, dwarfing even Edge

Station’s asteroid. While most are smaller… there are so many.

Hundreds or thousands of crafts moving in perfect tandem. Each is

all sleek, aggressive lines. Like a sword or spear sized to stab a god.

You have never seen these ships, and yet you have. They are an old

foe, and you have fought them many times.

But… they always win, and you always die.“

Central AI is coming with an entire fleet; the PCs have fought and lost this battle an infinite number of times, and thus, the characters benefit from practiced perfection throughout, which is mechanically represented in a variety of ways. The PCs start off with a frickin’ functional time machine (problem solving advice included); it can transfer matter; it can tinker in the past – and yet, there is no chance to win. There simply are not enough people on Edge Station to beat Central. Ever. Only, you know, the PCs can take themselves out of alternate timelines/realities, evening the odds – and it only costs a few hundred-trillion lives as those doomed realities are now reliably lost. Of course, seeing variants of yourself die and die and die over and over again isn’t particularly good for the psyche…

And there are limits: Timetech Gamble pays a hefty, horrible price for the use of the time machine; Butterfly effect tables, and Vincent’s mighty Node as an ace in the whole also are included – but ultimately, the module requires winning against a vast fleet combat, which comes with concise rules for starship fleets and (rules more abstract and simpler than starships, but otherwise capable of making fleets pretty much on the fly, based on starships), but starship-level rules for Edge Station are provided as well; indeed, it is possible to run this potentially sans the fleet combat, but the beauty here is that you can switch from fleet combat to ship combat to personal combat, if you want to – you know, PCs on board a ship fighting nano warrior invaders, representing hundreds of battles like this, taking place all over the fleet, as infinite PC duplicates live and die…

Ultimately, the PCs need to face the Nanochine avatar of Central AI itself; it has killed them 127 times; it can’t fathom how they can still surprise it; it can’t fathom that here, at this one junction in time and space, at this one instant, the all-mighty AI can LOSE. It’s up to the PCs – or their future might well end up a thing of the past…

Editing and formatting, on a formal level, are good – it’s the one thing about this book that I don’t love; it’s good, mind you, but I noticed a few instances of spell-references missing their italics and similar cosmetic glitches. Layout adheres to the series neat two-column full-color standard, and the module comes with great full-color artworks. The pdf comes fully bookmarked for your convenience, and we get a pretty awesome galaxy map, but no player-friendly version of said map.

I should probably penalize this for its minor hiccups.

This conclusion to Future’s Past not only manages to end the AP in a satisfying manner, it actually succeeds in surpassing the previous installments. Yep, you read that right.

If you’re an experienced GM, you will read this and balk at the ambition, at the scale. At how smart it is. At how well it covers all those “OMG, I can’t handle that” aspects; this book not only makes a functional time machine work, it expects the party to properly use it. To beat impossible odds that would even be beyond the power of deities. At level 5/6. And IT WORKS.

The streamlined, quick fleet combat suffused with the option for individual encounters of starship combat requires prep-work. This holds true for the entire module. This adventure assumes competence on part of the GM. If you pull it off, your players will laud you forever.

I genuinely can’t believe that this series exists and is complete. Why? Because it is so smart, clever and concise it almost hurts me; each module in this series can outclass adventures of thrice or more pages; the entire campaign is perhaps one of the best scifi/science-fantasy campaigns ever put to paper. At least I’d be hard-pressed to mention anything that comes close. Additionally, it’s a saga that exceeds in ambition and scope what most authors and publishers would even dare to attempt, much less pull off. I still can’t believe that this masterful AP was pulled off not only with a singularly clear vision, but even without using a kickstarter or the like. Within the seemingly few pages of the saga, the extremely concise writing allows GMs to easily spread the content if desired. You could make this module, for example, last one session – or up to 5-6.

Stephen Rowe once more shows why he’s one of the few authors I buy sight unseen. I have the entire AP in softcover, and I’d rather sell some limited edition hardcovers than these modules.

How good is Future’s Past? If you play any non-SFRPG scifi/space opera game, I genuinely believe that this saga is worth converting. Yes, even if you’re not familiar with SFRPG’s complex rules, this series is imho good enough to translate it to Stars Without Number, Traveller, etc.

This right here, this AP? It’s the benchmark for SFRPG-modules, the level that needs to be beaten. In fact, I consider Future’s Past to be so far beyond most modules, it almost feels unfair to put them in the same category.

5 stars. Seal of approval. Top Ten Candidate. EZG Essential. If you even remotely like the concept, please buy this series.

Future’s Past is one of these outstanding sagas that should grace the shelves of any GM. This should be considered to be a rite of passage level adventure for the genre.

You can get this masterpiece here on OBS!

Missed part 4, the Infinity Incursion? You can find it here.

Missed part 3, First Contact? You can find it here.

Missed part 2, Paying Forward? You can find it here.

Missed part 1, Edge Station? You can find it here.

If you’re enjoying my reviews, please consider leaving a donation, or joining my patreon here. Thank you.