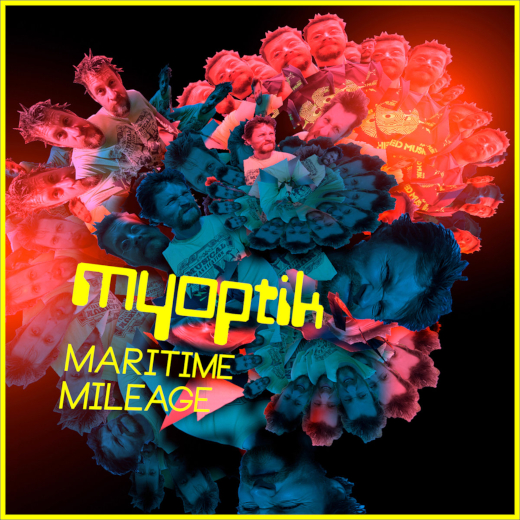 A mind-bending traverse through the braindance genre of yesteryear with a flare for left-field audio collages.

Myoptik‘s Maritime Mileage is a strange and interesting beast indeed—its sporadic, raw electronic backbone runs rampant with early braindance music of the late 90s and yet restrains itself from going into overdrive. Four tracks in particular span over 10-minutes while five of them are short interludes (under a minute each) of obscure sampled voices. An album designed by the artist (Richard Wilkes) to “capture and invoke many aspects of my 2017, unsupported 485 mile solo cycle tour from Dover to Plymouth,” he raised over £500 for MacMillan Cancer Support—much aligned with Touched Music—and crafts a unique experimental electronic release.

Brittle, and broken beats intermixed with screeching acidic IDM jaunts—as evidenced on “Omnisuance2 (Pt2 Limitless Noun)”—Myoptik doesn’t conform to any boundaries and transmits lively sounding improvisations (so it seems), and yet remains utterly coherent. On “Ocean Stormz (PT2 The Final Meditation),” crumbling atmospheric debris and industrial-ambient noises interact with each other in an unusual stream of subconsciousness. Elsewhere you’ll find downtempo artifacts buried deep in the core of the rhythmically moody, crunchy blips’n tones of “Nautical Mileage.” When it would seem difficult to keep any kind of unnecessary fluidity, “Gymnastical Hasting” changes the pace in its 13-minute excursion. It wouldn’t be surprising to find this track on C3PO’s intergalactic playlist of kinetic bleeps, stretch ambient motifs, crunchy drums, and raw bass drops.

In all, a mind-bending traverse through the braindance genre of yesteryear with a flare for left-field audio collages. Catch Myoptik on Sonar Radio via Mixcloud.