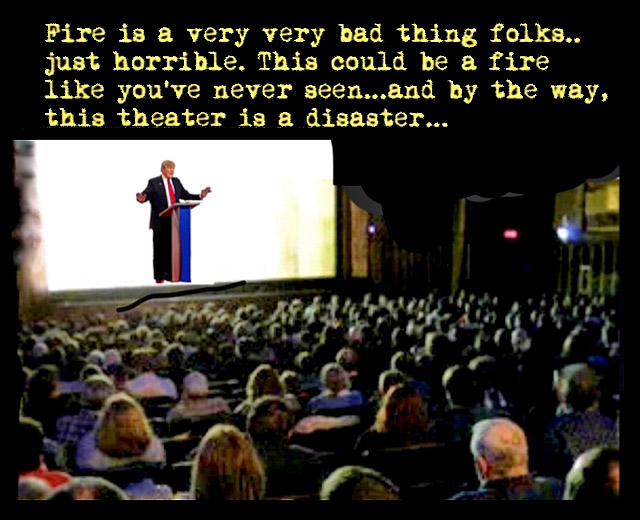 The Politics of Superstition

I know a thing or two about Donald Trump, after all, I grew up with him. We were both born in the same borough and more precisely, in the same hospital. Over the 24 years between our births, the populations served by that hospital had changed. For me, that change became part of my identity and for him, a repudiation that could only be salvaged by slapping his name on it.

Throughout my childhood, our local media afforded Trump attention that out-sized his accomplishment. Those rough years, the seventies into the Reagan eighties, the media wanted something or someone to look at that wasn't the blighted hangover of the previous decade. Instead, we were served a self-manufactured presence of over-confidence, a salesman, as the nation turned away from its problems to fix on the shiny object Reagan had promised, but never would deliver. In this past, Trump's vainglory, gold-plated hucksterism and bald-faced opportunism was self-serving. Apart from the misguided attention provided by a talktv-media industry always in search of content, his effect on most of us, then, was negligible.

Yet, here we are, today, in a confused haze, a political fog of war. What eggs me on this morning is something possibly tied to things I, under ordinary circumstances, would be more likely to ruminate on. On the precipice of this election, whose over-stimulation of the senses is experienced by the political spectrum, I cannot shake the supposition that we have a political body that has a tickle of calamity in their throats. A deep, possibly unconscious, metastasization of threat and decline that may have begun with the terrorist attacks of September 11, 2001.

Social, cultural, or political conservatism has roots in the fear that underlays the premise of stability. If I were to discard his means to leave only ends, I would say Donald Trump, the opportunist, has successfully re-established the minority's conservative vision of defunded government (so-called tax cuts), reduced environmental regulation, religious fundamentalism, "law and order," racially-stratified liberty, extraordinary defense spending, and more. These ends and his means are nothing new, but, once placed in motion, a simple arithmetic of means and ends cannot calculate the bloom of potential consequences, intended or otherwise.

What began as a circus of comedic take-downs of various GOP suitors has become a theater of tragedy -and what makes a tragedy is simple: it wasn't inevitable; it didn't have to be. Maybe the western wildfires are an apt metaphor. This tinderbox, full as it is with combustibles, shouldn't be governed by those apt to play with fire. Yet this president revels in flicking lit matches. His base is easily ingratiated; their laughter and applause entertain him; he becomes bored without it. His boredom excites his drive toward upset. It is easy to get the political class yammering, and even easier to attract the cameras, when political norms ushered him to a stage that he uses to destroy the vehicle on which he arrived. Once destroyed, it is much harder to go back, maybe impossible.

Is there any value in claiming Trump is irresponsible? His support doesn't think so, not as long as he is satisfying their belief systems. Beliefs do little to solve the problems we face as a nation or species. They do, however, have a long history of instigating persecution, mayhem, and murder in the face of calamity and fear. Identities are grouped into other, then targeted. Conspiracies are born of the union of fear and ignorance. Conspiracy-thinking is a form of political superstition -a mental salve and impetus for action. Do good things come from overwhelming ignorance (of which we are all capable), fear, psycho-political manipulation, or acting on that which is indemonstrable? We should all say not, were we to fully believe that we act from a place of unknowing.

Superstare [suˈper.starə], the Latin root of the word superstition, means 'to stand over,' sometimes implies 'to survive.' To stand over, of course, is to overcome, even to conquer. The Latin root indicates, to me, standing over reason, standing over what is knowable -the material earth, underfoot. Facts, reason, rational argument -these are underfoot, stood over, and overcome. This is the characterization I would apply to the base support of Donald Trump. Even if I were to stretch superstare to the meaning survive, it could be shaped to describe an identity politics of survival based in belief. This is the politics of superstition.

Where do we go from here? Some scholars believe the recurring plague of the 14th through 16th centuries led us to the period known as the Enlightenment. I will understand if you said three centuries doesn't offer much hope today. If you have the time this winter, watch The Black Death: The World's Most Devastating Plague. And, if not so much for its contemporary analogue, the historical description of a small pox outbreak in Montreal, documented in Outbreak: Anatomy of a Plague, assures us that the psychological and political responses to wide spread infectious disease are entirely unchanged. See! Some order can be provided by knowledge.

As for Donald Trump and his rhetoric of disinformation, racial othering, blame, conspiracy, hubris and guile? Tomorrow only begins the referendum on this nation's citizenry. Then the real work begins.

The Politics of Superstition