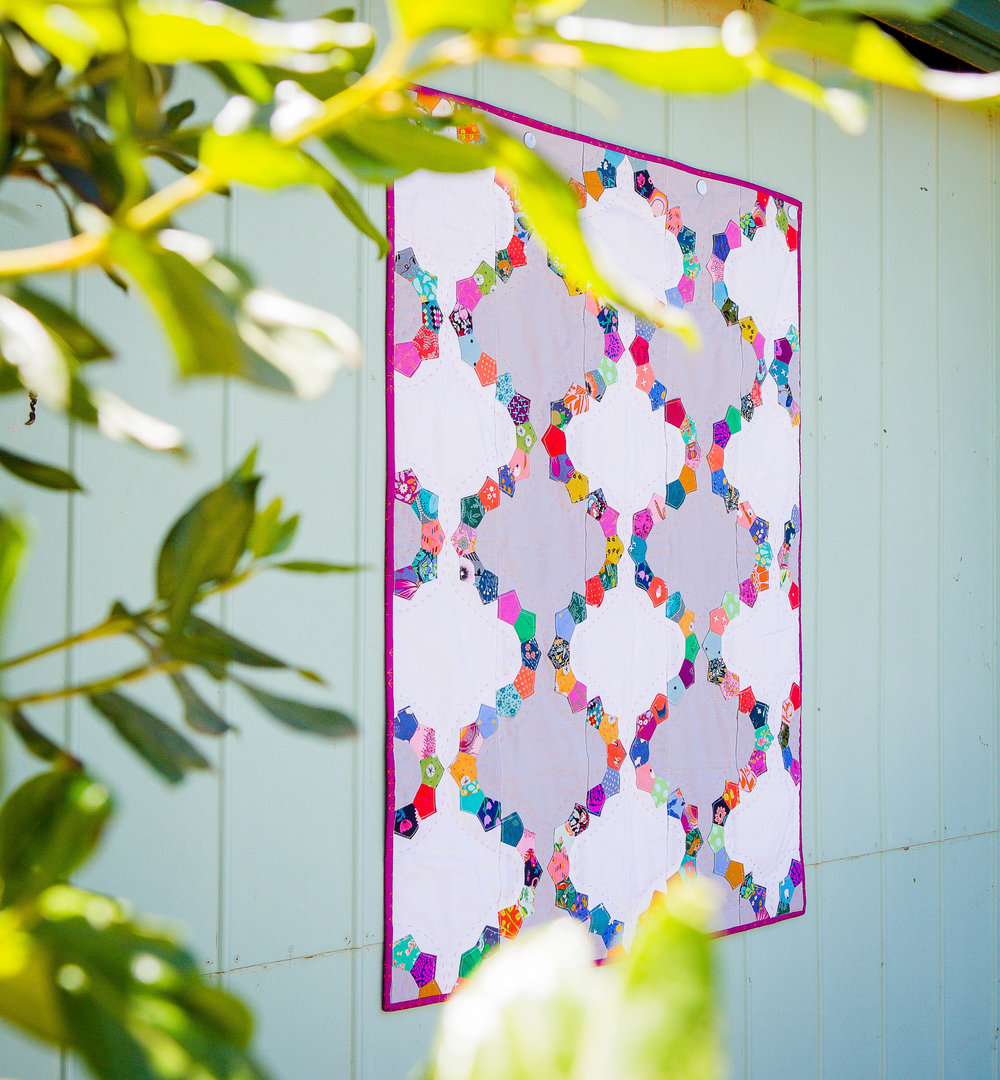 The word Elder comes from the Anglo-Saxon word for kindle or fire, because the hollow branches made for excellent firewood. Interestingly though, because of the rich healing properties of the berries, magical myths grew up around the Elder tree and burning it became a dangerous invitation for bad luck. Hippocrates, the Ancient Greek Father of Medicine, described Elderberry as his ‘Medicine Chest’ because of its effective use against colds and other infections.

In Medieval Europe, Elder protected homes from lightning, helped identify witches, and copious amounts of berries kept on the window sill distracted vampires, who would stop to count them rather than enter!

I had the little pentagon crescents made for this quilt long before I had a quilt for them, and I brought them out several times over the course of making The Seedling Quilts to see how they wanted to go together. I even considered scrapping them altogether a few times, but I had already put them in the Seedlings Quilt and like them there, so they stayed. One of the things I love about working on several quilts at a time is that ones that are stuck can wait for inspiration, rather than be forced to finish.

It was while I was making Feverfew, and fussy cutting this fan design by Anna Maria Horner that the inspiration struck. Yes! I could use background strips and different coloured middles for the blocks to make a curvy fan design! Ha! The quilt came together quickly in the following days.

People who’ve followed me for a while know that I’ve always struggled with my longing for creative expression. I grew up believing that creative careers were set aside for those who started piano lessons at 4 or who had parents driving them around to auditions and rehearsals. As a teenager I set aside any ambitions I had for theatre or singing and focused my attention on saving the world. If I only had one life, I should make a difference. And time spent drawing or writing poetry alone in my room wasn’t going to achieve it.

I wish I could have articulated these assumptions to friends or mentors at the time, so that they could have questioned me on them, but they were pretty settled and cloudy. It wasn’t until I had kids, that my energy for working with people shrunk to almost nothing and my need to create grew loud and angry. I wrestled with this long and hard. How could I sew away happily at home while there were orphans in Russia (orphans I had visited, not just metaphorical ones) without toilet paper? Thankfully, my response was often to just keep sewing and leave the third-life crisis to be figured out another day. So slowly, over about 8 years, I began to see that my feeble efforts to save the world were not really helping anyone, and were making me miserable. What if I took the risk and pursued what I longed for and just saw what happened?

This change in direction has, by no means, been the magic answer. Moving house and changing jobs is hard, making new friends is hard, running a business HARD. I’m not suddenly happy because I pursued my passions. But I also don’t think happy is the point. I made choices that were mine, that were important to me. Choices where I could own the sacrifices and the consequences. That’s incredibly meaningful to me.

For the last couple of years, I’ve been listening to Jordan Peterson’s psychology lectures at the University of Toronto. In his series on personality, he said this:

(Some creative people) just criticise themselves out of existence. So often I just have to get them to stop listening to their chattering, self critical, rationality and go out and create something. And as long as they’re doing that, they’re engaged in the world and happy as hell. But as soon as that rationality comes in and shuts down the creativity, they’re just walking corpses.

Man, that hit me hard! I often feel flabbergasted that I was made this way. Why not more organised? Why not tougher? Why not more practical and less head-in-the-clouds? But burning out it my youth work job, and having signed a book contract that was hanging over my head while we moved interstate, made me rethink my posture. If I was going to achieve anything with my one life, I needed to work with my skills and weaknesses. I needed to co-operate with myself. I needed to cut myself some slack, but also work hard at something I actually could work hard at.

So when I was researching my medicinal herbs, Elder felt like the perfect fit for this quilt. It was a spark. An idea that brought joy and productivity and healing and meaning. A quilt for beauty and for fun in a season when I felt burned to the ground, and was hoping for new growth.

You can find the Elderberry quilt kit here!