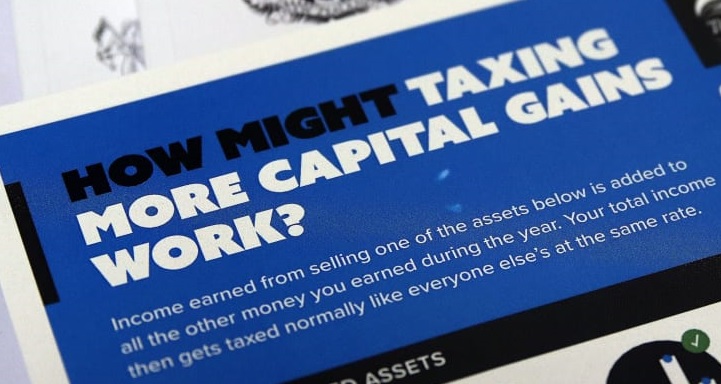 But their tax excludes the mega-mansions owned by New Zealand’s ultra-rich families, along with their super-yachts, private jets, foreign share portfolios, art collections, jewellery, antiques and other collectibles.

Instead it captures the nurse, who has struggled all her life to save for her retirement, scrimping and saving to put some money into KiwiSaver and to buy a single rental property. A third of the profit on her rental would be taken by the Government, along with a third of her KiwiSaver returns – as they accrue.

It will also catch business owners like the plumber, who has worked long hours building his business, carrying all of the risk, only to find that when he wants to sell up to retire, a third of the goodwill he has created will be taken by the taxman.

The Prime Minister has repeatedly assured us that our homes would be safe from any proposed capital gains tax. But that’s not true for those living on a bigger section – while their house and an acre (4,500 square metres to be exact) would be exempt, the rest of their land, even if it’s unproductive and cannot be subdivided, would be taxed.

Everyone owning a family bach will be captured by the new law, as will farmers, who, apart from their home and an acre, will be taxed on their land and business.

Is penalising success and undermining our way of life the “fair” society that the PM has in mind?

Is it fair that the PM’s capital gains tax will be set at one of the highest tax rates in the world?

Is it fair that Maori tribal groups may be exempted from a capital gains tax?

Is it fair that inflationary gains will be taxed?

These things are absolutely not fair, and could not be considered fair by anyone with a sense of perspective on what fairness actually is. That’s because the proposed new tax would be changing the rules. The only fair way to introduce the sort of capital gains tax that Jacinda Ardern wants to impose on the country, would be to follow the Australian policy and ‘grandparent’ all assets owned at the time of the introduction of the tax.

As Robin Oliver, a former Deputy Commissioner of Inland Revenue and one of the three Tax Working Group members who opposes a capital gains tax has explained, “Before introducing such a highly punitive tax, [the government should] just enforce the laws that are already in place!”

The reality is that a capital gains tax has been in place in New Zealand for over fifty years. Called the ‘intention test’ it deems that any profit made from the sale of assets or property should be regarded as income, if it was acquired for the purpose of disposal.

This existing capital gains tax was strengthened by National in 2015 in response to the rapid increase in house prices caused by rising immigration. The ‘bright-line’ test taxed any profit made on the sale of rental property within two years of purchase. Once elected, Labour extended it to five years.

Successive governments have looked into the possibility of introducing a stand-alone capital gains tax. However, each of the tax reviews – and there’s been one every 10 years or so for the past 50 years – has concluded that unless the tax is comprehensive and includes the family home, the cost of enforcement outweighs the benefits.

The 1967 Ross Committee review rejected a capital gains tax on the basis of a low revenue yield and huge complexities, not to mention the disincentive effect that such a tax would have on risk taking, investment and growth.

The 1982 McCaw Committee review also recommended against a capital gains tax on the basis that it would not produce significant revenue but would create substantial complexity within the tax system.

The 1987 Valabh Committee, on the other hand, recommended the introduction of a comprehensive capital gains tax without exemptions – they believed that such a tax that included the family home and private assets, would broaden the tax base and allow all other tax rates to be lowered across the board.

However, Prime Minister David Lange rejected the idea, saying “a capital gains tax policy is one that is likely to lose you not merely the next election, but the next three”.

The 2001 tax review, chaired by Rob McLeod concluded, “We do not consider that New Zealand should adopt a capital gains tax. We do not believe that such a tax would make our tax system fairer and more efficient. Instead, such a tax would increase the complexity and costs of our system.”

The 2010 tax review came out in favour of a capital gains tax, but only if it was comprehensive – including the family home and private assets – and accompanied a reduction in income tax and company tax.

In contrast to these independent reviews, by appointing a former Labour Minister of Finance as the chairman, Jacinda Ardern ensured she would receive a politically biased outcome from her Tax Working Group.

Essentially their proposed capital gains tax would exclude the family home but from April 2021 would apply on the sale of residential property, businesses, shares, all land and buildings, and intangibles such as intellectual property and goodwill – except for KiwiSaver, which would be taxed on an on-going basis as profits accrue.

The tax rate would not be the 15 percent that Labour campaigned on, but the income-earner’s top tax rate, which is likely to be 33 percent for most New Zealanders.

With our relatively low income tax thresholds, the tax would disproportionally hit middle-income earners who are already struggling to invest for their retirement.

Furthermore, by taxing possessions bought with income that has already been taxed, this double taxation would dramatically reduce the incentive to save and invest in productive assets.

In fact, given that a lack of capital is one of the main reasons for New Zealand’s chronically low rate of productivity, that has long been holding the country back, it seems totally irresponsible for any government to be even considering taxing capital.

With its harsh rate and unfair application, this scheme has been described as being “more draconian than in Russia and China”.

Labour initially claimed a capital gains tax would improve housing affordability. But other countries show that does not occur. In the long term the tax is likely to push house prices higher as people use their savings to upgrade their family home and create tax free wealth – the ‘mansion effect’.

As a consequence, the cost of providing rental housing will gradually shift from the private sector to the state and social housing providers, as fewer rentals become available. This will force rents up further, even though they are at an all-time high as a result of the punitive changes already introduced by Labour, including extending the bight-line test, ring fencing tax losses, abolishing letting fees, and imposing a raft of costly new regulations covering insulation, heating and ventilation.

The Tax Working Group also claims that their capital gains tax would reduce inequality. But as this week’s NZCPR Guest Commentator, Economist Dr Edward Hudson explains, claims that inequality in New Zealand is rising are being exaggerated:

“Economic growth means that, over time, virtually everyone becomes better off. Wealthy people become wealthy as a result of higher incomes, or greater contributions to the economy, not by expropriation. Even those on benefits or NZ Superannuation have shared in the increase in incomes that comes with economic growth.”

In other words, if Jacinda Ardern’s Government is serious about wanting to improve the lives of all New Zealanders, her focus should not be on vindictively taxing aspiration and success, but on improving economic growth.

As Dr Hudson explains, just as a rising tide lifts all boats, so a growing economy benefits all levels of society. And the secret to higher living standards and stronger growth is lower taxes, not a capital gains tax!

Labour’s recent flirtation with a capital gains tax can be traced back to Phil Goff. When he took over the leadership from Helen Clark, he appeared to want to take the Labour Party back to its British working class roots. Comrade Ardern is going down that same path.

But Goff and Ardern have misjudged New Zealanders. Kiwis are aspirational, with an outlook on life that’s based on the belief that anyone can get ahead if they are prepared to knuckle down and work hard. By and large, as a society, we roll up our sleeves and get things done. Most New Zealanders just want the opportunity to do better for themselves and their families. That’s why Labour’s ‘us-and-them’ class-based politics fails to resonate.

When Phil Goff campaigned on a capital gains tax in the lead up to the 2011 election, party strategist, MP Trevor Mallard, advised supporters to avoid talking about the detail of the tax: “The key point for us is not to be dragged down into the detail on the CGT. The public don’t care and we get boring”.

Labour’s leadership knew that if voters really understood the full impact of the capital gains tax they were proposing, then David Lange’s warning would come to pass.

They lost the election, but undeterred, Labour’s new leader David Cunliffe pushed a capital gains tax in 2014, and they lost again.

When Andrew Little took over Labour’s leadership, he was not convinced a capital gains tax was the vote winner the left of the party claimed it was. His approach was to say that once elected, Labour would set up a tax working group to decide on a capital gains tax policy, that would then be put to voters for a mandate at the 2020 election.

With strong support from the far left of the party, Labour’s new leader Jacinda Ardern made a “captain’s call” to design and introduce a capital gains tax after the 2017 election.

Following the predictable outcry over her plan to introduce major tax reform without a public mandate, she was forced into another “captain’s call” – this time a tax working group would outline a capital gains tax policy that could be implemented after the 2020 election.

And that’s where her Tax Working Group’s proposal comes in.

So where to now?

Politics is a numbers game. While the Greens would support even the harshest of capital gains taxes, New Zealand First may baulk at the proposal. Winston Peters is on record opposing such a tax. If he stands by his election promises, Labour’s punitive capital gains tax policy is dead in the water.

Meanwhile, National has stepped up and strongly opposed the proposed capital gains tax, promising to repeal it when they are elected.

Their tax reform proposal would instead index tax thresholds to the cost of living so that Kiwis can keep more of what they earn.

To make their policy more acceptable, Labour added a sweetener – it claims it will “offset” what it robs from Kiwis via the new capital gains tax, with income tax cuts.

But this should be seen as the bribe that it really is. As the long-term impact of the capital gains tax beds in, there is little doubt that the taxes raised from the hundreds of thousands of small business owners, bach owners, farmers, lifestyle block owners, sharemarket investors, KiwiSavers, and others, will dwarf the $16 or so a week from the income tax cuts. This “offsetting” is equivalent to taking someone’s lunch, and giving them back crumbs.

The Government is expected to report back on whether it intends to go ahead and introduce a capital gains tax in late April.

In the meantime, if you feel strongly about this, you should share your views directly with Government MPs – their email addresses can be found HERE.