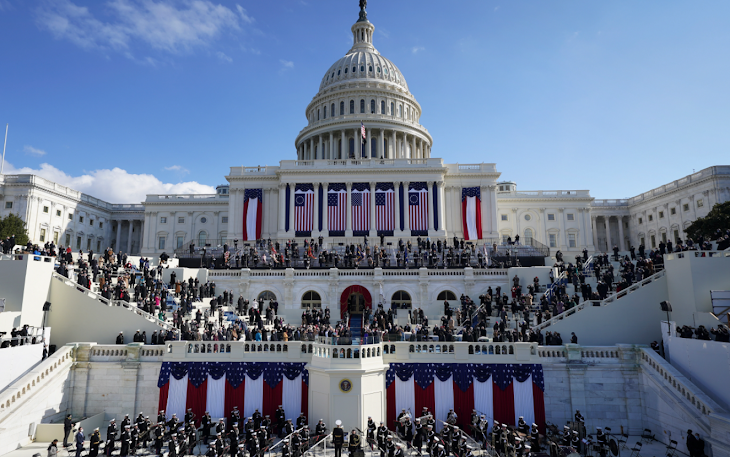 Jan 20 - Perfection From Start To Finish

Yesterday was a beautiful day from start to finish, and I relished in every single moment of it. We left the TV area slightly between the final parade and the start of the evening festivities, but otherwise we were pretty much glued to it. I found myself getting very emotional at numerous times throughout the day, which was a sobering reminder of how god-awful the last four and a half years have been, when hate was endorsed and given free reign here in America.

At some point during the day I had a flashback to 2016, during a three week Spanish language immersion stay I was in in the midst of in Costa Rica. Several of my fellow students were going on and on about how awful Trump was, the result of his just having won the Republican primaries. I was getting weary of it to be honest, not wanting the trip to be overshadowed with negativity, and at one point I said, 'Instead of focusing on Trump, you all should be focusing on the millions of Americans that gave him the win. That is the bigger story and issue in my opinion.'

So, even as I allowed myself to spend the entire day yesterday celebrating the return of much that I love about America, I recognize that the people that put him into office in 2016 are still with us, and shaking them loose of the tree they elected to embrace via Trump will be very hard work.

Still, so many high points for me yesterday, and here are a few of them:

- Seeing the three former Presidents that attended, Pres. Obama, Pres. Bush, and Pres. Clinton enter the Capital ceremonial area along with their wives, all amazing, outstanding women in their own rights.

- VP Harris' beautiful and culturally diverse family, which so represents my America. Those two little grand nieces in their faux-leopard coats were beyond adorable.

- That Pres. Biden and VP Harris elected to wear purple, a blending of red and blue, and which I took to represent the unity they have vowed to work toward.

- The entrance of Capital Hill police officer Eugene Goodman, the officer that so heroically turned the insurrectionists away from the Senate on December 6, as he escorted VP Harris to her seat.

- When Lady Gaga sang the national anthem and got to the line, gave proof through the night that our flag was still there.'

- The clear love that was on display in both the Biden and Harris families.

- The much needed visual passing of the VP power baton that occurred on the steps of the Capital between the Emhoff-Harris' and the Pence's.

- The excitement of Pres. Biden when he stepped out of his presidential limo just before reaching the White House, and ran to greet people standing alongside the parade route.

- Every. Single. Thing. about the wonderful, wonderful evening show. The tribute to our medical and essential workers, the inclusion of so many people of color, the fantastic songs (I miss live music!!!!), and the ending of the evening with one of my favorite songs in the universe, Fireworks by Katy Perry, a song about never letting yourself feel less than.

Jan 20 - Perfection From Start To Finish