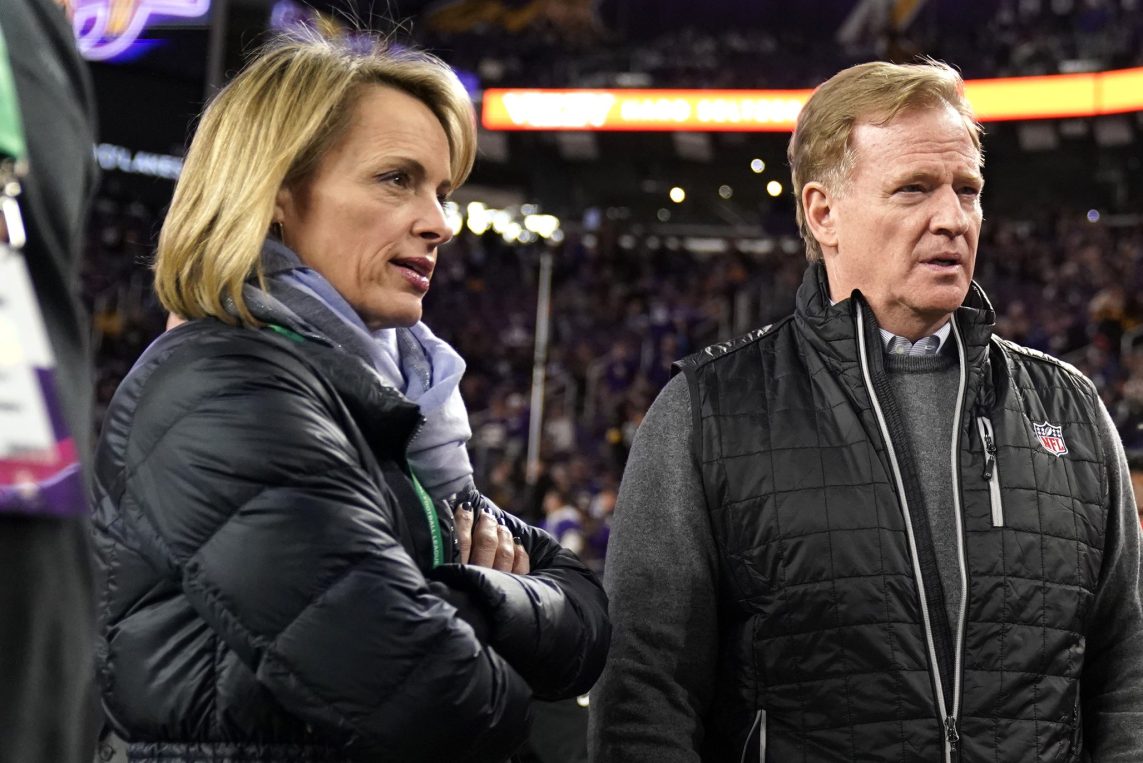 The NFL is the most powerful and popular professional sports league in America by a wide margin, so it makes headlines on a daily basis, whether games are being played or not.

As anyone who pays attention to those headlines knows, the NFL is far from perfect and certainly has issues that need to be addressed, but, to the league’s credit, it does seem like the NFL has been making an effort to become more progressive as an organization, as well as more inclusive as an employer.

To that end, there has been a growing number of women ascending to high-profile referee and coaching positions in the NFL as well as influential jobs within the league office. A new docuseries from NFL Films that debuted earlier this year on Peacock, Earnin’ It: The NFL’s Forward Progress, highlights some of the trailblazing women and showcases how they are helping to make their mark on what has traditionally been a male-dominated league.

Jane Skinner Goodell, the wife of NFL commissioner Roger Goodell, executive produced Earnin’ It and appears on a companion podcast of the same name. She recently spoke with InsideHook about the five-part series and the trend of women rising through the ranks of pro football to positions of power in America’s most beloved sport.

InsideHook: What do you think you and your team was able to accomplish with the series?

Jane Skinner Goodell: I think what we’ve done is challenge some assumptions about what people think about a woman’s job in football. I think people are going to watch this series and say, “Wow, I had no idea. I had no idea these women do all sorts of different jobs.” We’re not just talking about coaches or sideline officials. There are tons of really interesting positions: front-office jobs, football-ops jobs, scouts, agents … I think people are going to be surprised at the breadth of opportunities there are for women, the experiences they’ve had and what they bring to the table. Also, I think it’s going to be fun to see the impact it will have on viewers who might think they know how the NFL operates. As a storyteller, I love the fact I get to chronicle a change in society and a change in an industry.

Was there any sense of obligation to make Earnin’ It after perhaps the NFL hasn’t been the most welcoming place for women to work?

I guess I would take issue, kind of, with your assumption there. I have had a 50-yard line seat with the NFL for about 25 years from being married to Roger, and I think the assumption that it hasn’t been a great place to work is not accurate. I’m sure there are people who have been unhappy like at any institution or workplace in this country. A commitment to having a healthy work culture goes back many years. Is there still work to be done? Sure. There’s work to be done in every part of society. You’re in a male-dominated industry, so a female coach may not be the first thing you think of, but I think it’s an evolution of thought. [Washington Commanders coach] Ron Rivera said this morning, “The last thing I want is for somebody to feel like they were a token hire. This is not about that. This is not to get attention. This is actually because we think these are really smart people who can help us win. Why would I possibly want to bring on somebody who couldn’t help us win?” So, I think it really is just an evolution of thought.

Was there a common thread uniting the women that surfaced over the course of producing the show?

The title, called Earnin’ It, came from the women themselves. When I was pre-interviewing and getting to know them separately, every single one of them used that phrase in some form. It was, “I’m not here as a token. I have earned this opportunity. I know what I’m doing and I’m ready for it.” Like an NFL player, you have to earn your position and work to keep your position every single day. It is so similar to when you talk to players and male coaches. Everybody kind of feels the same way. It’s just a culture of winning and hard work and perseverance. You have to accept down days and work through them. I use the word obstacle. They don’t. They use words like challenge and opportunity. They are super optimistic, competitive and and driven people, not unlike players, coaches and anybody you meet in the league. They deal with any negativity in a really positive way and channel it. A lot of them also said, “I use it as fuel. Someone thinks I can’t do it? Well, guess what? I’m going to show you I can.” They’re a different breed.

Is there a lasting impression you’d want viewers to walk away with?

Again, we’re going to challenge people’s assumptions of what they think a woman in the NFL does or what her perspective is or work ethic is … any of those things. You know, I think we mostly watch football with family. It’s centered around family and friends. It’s a communal experience. I encourage people to watch Earnin’ It with their kids and their grandparents. I think they’ll be fascinated by the stories, the lessons really, that the women offer. They’re the ones who offer the life lessons. I can’t really offer those as the producer. I think they’re going to find their stories are super rich and they are unafraid to be trailblazers, which is no small thing. This was a total labor of love and I’m so honored to have been able to hang out with the coolest women on the planet.