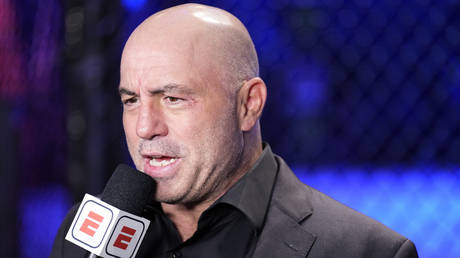 Rogan reasoned that now that the pandemic was over — if not officially, then at least implicitly in health authorities’ retreat from the mandates and constant testing that characterized the last two years — “people are going to recognize that some serious errors were made and not repeat those.”

“That’s the best you can get out of it. But as far as compensation for all those people that were forced to close their businesses and keep their doors shuttered and lost everything they’d worked for decades to build … they’re just going to be angry,” he said.

Asked by Rodgers what he’d tell those people, Rogan responded by laughing and saying “Vote Republican.” The sports commentator cited a recent AP article that described a “political shift” in voter demographics in which two thirds of those who changed their party registration in the last year became Republicans and revealed the trend was affecting all regions of the US, likely posing a threat to the Democrats’ majority in Congress.

Rogan praised Florida Governor Ron DeSantis over his determination to keep Florida open for the majority of its residents, protecting the masses’ “freedom” while protecting the elderly and vulnerable from the virus.

Demonized as “DeathSantis” by pro-lockdown Americans for his refusal to keep businesses closed and mandate masks and vaccines, the Republican politician is beloved among many in his own party and rumored to be considering leveraging his pandemic popularity into a presidential run, an idea Rogan has previously expressed support for.

The controversial podcast host was criticized during the pandemic for using his massive platform to call attention to the work of Covid-19 ‘dissidents’ like virologist Robert Malone and cardiologist Peter McCullough, who were regularly criticized in mainstream media for going against lockdown orthodoxy.

READ MORE: After Covid, we must embrace critical thinking again

Rogan’s decision to take ivermectin when he fell ill with Covid-19 — an antiparasitic drug that is on the WHO's list of essential medicines but was not an approved treatment for the virus — was similarly denounced as irresponsible, with CNN anchors accusing him of eating “horse dewormer” in reference to a veterinary formulation of the drug.