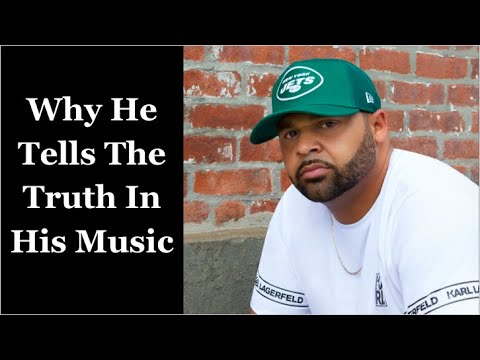 This month, Joell Ortiz delivered a new album, The Autograph. The release, embedded below, marks Ortiz's fourth with indie stalwart Mello Music Group. After a career cultivated by rapping his circumstances directly to the listener, Joell somehow goes even deeper on his new album. As he tells Ambrosia For Heads' What's The Headline podcast (embedded in video and audio below), Ortiz made a song to deliberately soundtrack one of the most personal moments of his life. Then, he included it with The Autograph and shared it with fans. Speaking from The Heatmakerz' Manhattan studio, Joell is candid about achieving the kind of peace and understanding that he addressed on the single "OG." The veteran opens up about how he has enjoyed the perks of recognition without the social perils of superstardom. The New Yorker revisits pivotal moments from his 20-year-career and addresses those seasons that did not necessarily go according to plan. Joell Ortiz Performs A 3-Minute Rhyme A Capella In Brooklyn (Video) A proud Brooklyn native, Joell is asked to name his favorite MCs from the borough at the 7:00 mark. The original question is framed to exclude himself. "Top 5 Brooklyn MCs: you've got JAY-Z, you've got Biggie Smalls, you have Big Daddy Kane, you gotta mention Fabolous, man. He's kept the pen pushing for a long time," he says of a peer who made appropriately made his debut on DJ Clue's The Professional in 1998. "I don't want to leave anybody out," Ortiz continues, rubbing his beard. "I gotta insert myself [chuckling]. I know you said [not], but it would just be blasphemy to not put me in there Yeah, I'm in the top 5." Since his Rawkus-distributed 12" single "How They Do" in 2001, Joell has made his impression felt. On Joell's breakthrough solo album, 2007's The Brick: Bodega Chronicles, he enlisted Big Daddy Kane as well as Maino for the remix to "Brooklyn." In 2016, Joell and Kane reunited for "Kill At Will: The Final Chapter." Premiering at AFH, the Domingo-produced track featured Joell, Kane, Snow Tha Product, Chris Rivers, and Token. Joell has not released music with JAY-Z or Fabolous to date. Skyzoo Explains How Phonte Talked Him Out Of Retiring The time codes for episode #68 of the What’s The Headline podcast: 0:00 Intro 1:00 The partnership Joell Ortiz has with Mello Music Group 3:00 How Joell Ortiz approaches storytelling in his music 4:50 Joell Ortiz was competing with JAY-Z when he first started 7:00 Joell Ortiz names his top 5 Brooklyn MCs 8:25 It’s becoming cool again to listen to great Hip-Hop 9:47 Joell Ortiz speaks about always striving for new heights 14:20 Joell Ortiz on how Stretch Armstrong changed his life 17:05 What Joell Ortiz would change about leaving Aftermath Entertainment 19:40 On being born to be an MC 20:45 Joell Ortiz on the benefits of keeping a low profile 23:55 The story behind Slaughterhouse’s “I Will” with Eminem 26:25 Joell Ortiz on creating his first Hip-Hop love song 29:00 On using his song “Lifeline” as his wedding vows 32:20 Joell Ortiz on how he uses music as therapy 36:40 The power of revealing secrets through music 38:52 Joell Ortiz on working with Cyhi The Prynce on "Holy Ghost," and their similarities 43:20 Why Joell Ortiz made "OG," a song about growing older 49:00 Why Joell Ortiz is always making new music AFH readers can catch regular discussions about the culture on our What’s The Headline podcast. What’s The Headline has recent interviews with AZ, Blu & Mickey Factz, Kurupt, Evidence, Skyzoo, Pharoahe Monch, Prince Paul & Don Newkirk, Statik Selektah, Lyric Jones, The LOX, MC Eiht, Havoc, Duckwrth, photographer T. Eric Monroe, and Lord Finesse. All episodes of the show are available to view or for listening wherever you stream your pods. AZ Names The 7 MCs Who Influenced Him The Most Press photograph by Photo Rob. #BonusBeat: Stream/support The Autograph by Joell Ortiz:
Source: ambrosiaforheads.com