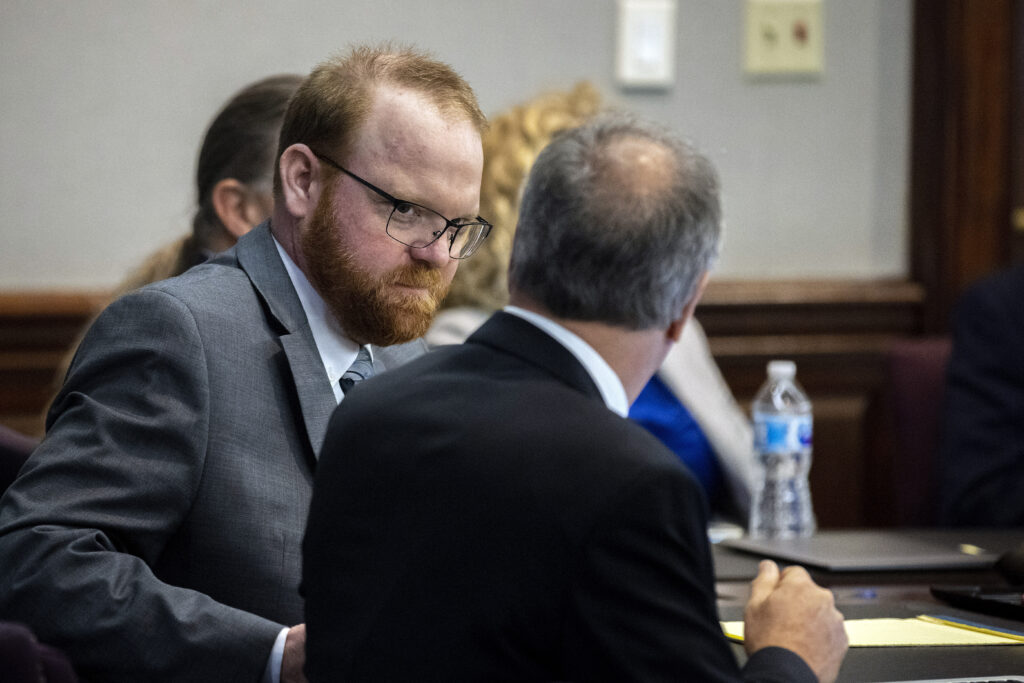 A nearly all-white jury in a Glynn County courtroom Wednesday afternoon convicted three white men of murder in the death of Ahmaud Arbery as the 25-year-old Black jogger ran through their neighborhood in February 2020.

Travis McMichael, seen all over the world in a viral video that shows him firing a shotgun into Arbery at close range, hung his head briefly after Judge Timothy Walmsley read the jury’s guilty verdict for malice murder and eight other charges. Malice murder was the most serious of the multiple felony murder charges he and the other two defendants faced.

His father, Greg McMichael, was convicted on eight of nine counts including four charges of felony murder, but the jury found him not guilty of malice murder.

And William “Roddie” Bryan, who joined the McMichaels’ pursuit of Arbery through the Brunswick-area neighborhood in his pickup truck while he recorded on his phone, was convicted of five of eight of the charges he faced, including three felony murder charges.

The convictions mark the culmination of 18 months of Arbery family pressure to deliver justice after the three white men were spared arrest for weeks after police responded to the bloody scene of the after the unarmed Arbery was shot in the street.

About 1,000 juror candidates were summoned to hear the trial that started Oct. 18., with the pool trimmed to one Black person and nine white people. Many said they either knew one of the defendants or a member of the Arbery family, complicating jury selection. After the racially lopsided jury was confirmed, the judge expressed disappointment with the composition.

The racial makeup of the jury and the law enforcement background of one of the defendants raised questions whether the three white men could be convicted in the deep South.

In late winter 2020 Glynn County was already abuzz with questions about how an unarmed Black man could have been shot to death in the Satilla Shores neighborhood near Brunswick with no arrests made. Atlanta-based New York Times reporter Richard Faussett filed an open records request with local prosecutors to get his report that the gun-carrying McMichaels were cleared through their claims of attempting a citizen’s arrest and self-defense.

Gregory McMichael previously worked in law enforcement, including as an investigator for the district attorney’s office in Brunswick. Former Brunswick district attorney Jackie Johnson initially cited the state’s citizen’s arrest law as justification for not arresting the McMichaels. She was later indicted for her handling of the case, which is now being prosecuted by the Cobb County District Attorney’s Office.

Early in the trial, Bryan’s attorney Kevin Gough told jurors the trial wasn’t about race even though the case served as a touchpoint for the social justice protests in the summer of 2020. Protesters marched to the Georgia Capitol that June in the names of Arbery, George Floyd and other Black men and women killed at the hands of whites, often law enforcement professionals. Minneapolis police officer Derek Chauvin was found guilty of Floyd’s murder in April.

But it was Gough himself who injected skin color as a consideration when he objected to the presence of Black pastors in the courtroom, gathered in Brunswick to comfort the Arbery family. Gough complained the jury could be influenced seeing Rev. Jesse Jackson and Rev. Al Sharpton sitting in the pews in the small courtroom.

And, in her rebuttal Monday to the defense’s closing arguments, Cobb County senior assistant district attorney Linda Dunikoski pressed that Arbery’s race was a motivating factor for the defendants after spotting a “Black man running down the street” of the Brunswick-area neighborhood.

Elected officials from Georgia’s Capitol to the White House quickly expressed relief for the jury’s verdict and sorrow that the murder victim lost his life senselessly while on a Sunday afternoon run a couple of miles from his home.

“Ahmaud Arbery’s killing – witnessed by the world on video – is a devastating reminder of how far we have to go in the fight for racial justice in this country,” said President Joe Biden. “Mr. Arbery should be here today, celebrating the holidays with his mother, Wanda Cooper Jones, and his father, Marcus Arbery. Nothing can bring Mr. Arbery back to his family and to his community, but the verdict ensures that those who committed this horrible crime will be punished.”

“Ahmaud Arbery was the victim of vigilantism that has no place in Georgia,” Kemp said soon after word spread of the convictions Wednesday afternoon. “As legal efforts continue to hold accountable all who may be responsible, we hope the Arbery family, the Brunswick community, our state, and those around the nation who have been following this case can now move forward down a path of healing and reconciliation.”

Travis McMichael’s defense attorney said during a press conference outside the courthouse Wednesday afternoon he plans to appeal.

“This is a very difficult day for Travis McMichael and Greg McMichael,” said attorney Jason Sheffield. “These are two men who honestly believed that what they were doing was the right thing to do. However, the Glynn County jury has spoken and they have found them guilty and they will be sentenced. That is a very disappointing and sad verdict.

He also acknowledged the grief weighing on the Arbery family since Feb. 23, 2020.

“But we also recognize that this is a day of celebration for the Arbery family,” Sheffield said. “We cannot tear our eyes away from the way they feel about this. And we understand that they feel that they have gotten justice today. We respect that, we honor that because we honor this jury trial system.’’

Sharpton, a regular presence in Brunswick this month, expressed the sentiments echoed by many Wednesday after the verdict, lamenting that there will be an empty chair at the Arbery’s homes on Thanksgiving, the seat where Ahmaud Arbery would have shared fellowship with his family if he had lived to his 27th year.

“First and foremost, let’s start by thanking God by shining on us,” Sharpton said, flanked Cooper-Jones and Marcus Arbery Sr., and other family members, and lawyers outside the courthouse.

‘Let us thank all the people that believed and let us more than anything thank the mother and father of Ahmaud,” Sharpton said. “They lost a son but their son will go down in history that will prove that if you hold on, justice can come.”

The Georgia Recorder’s Stanley Dunlap contributed to this report.