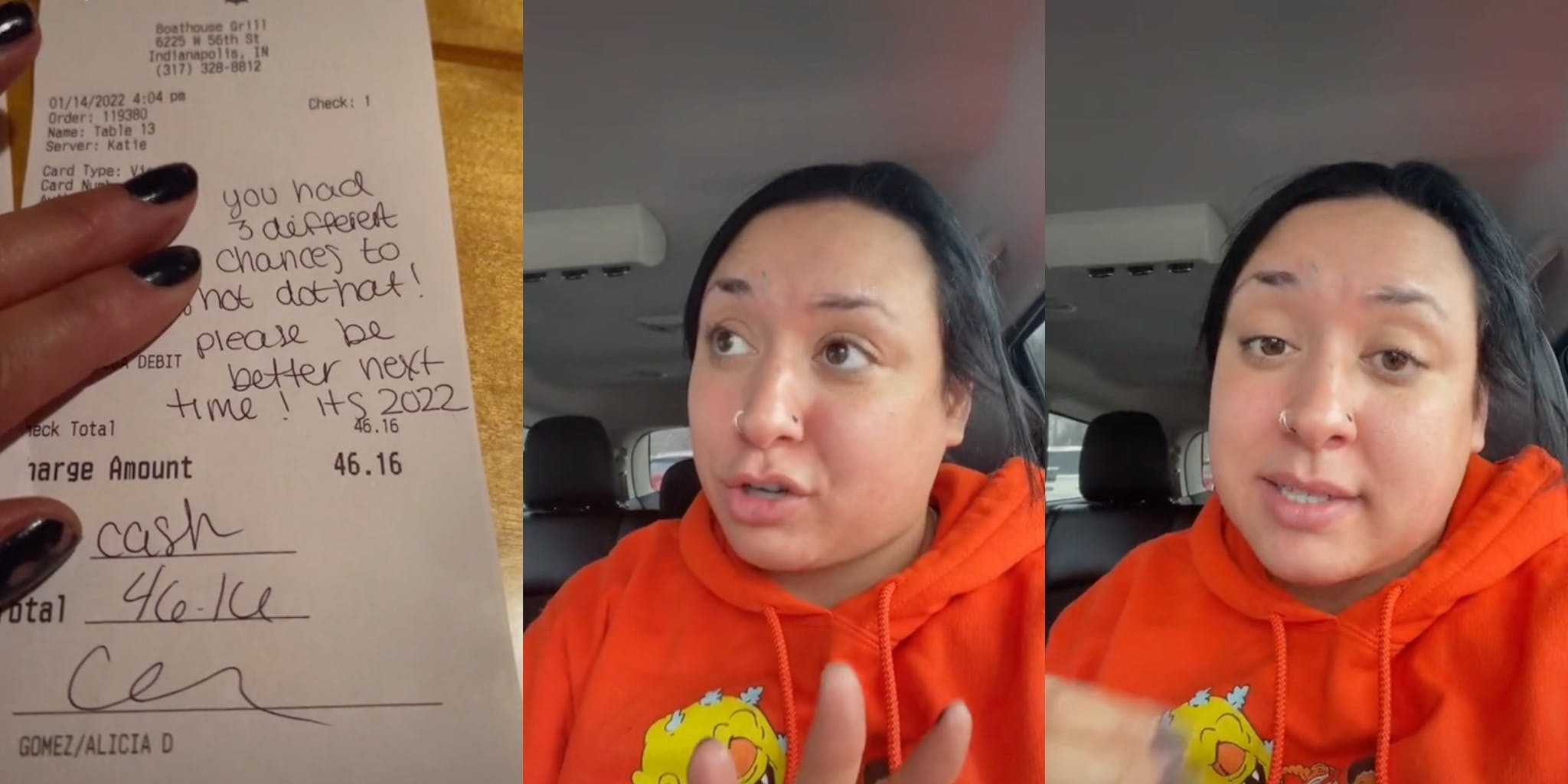 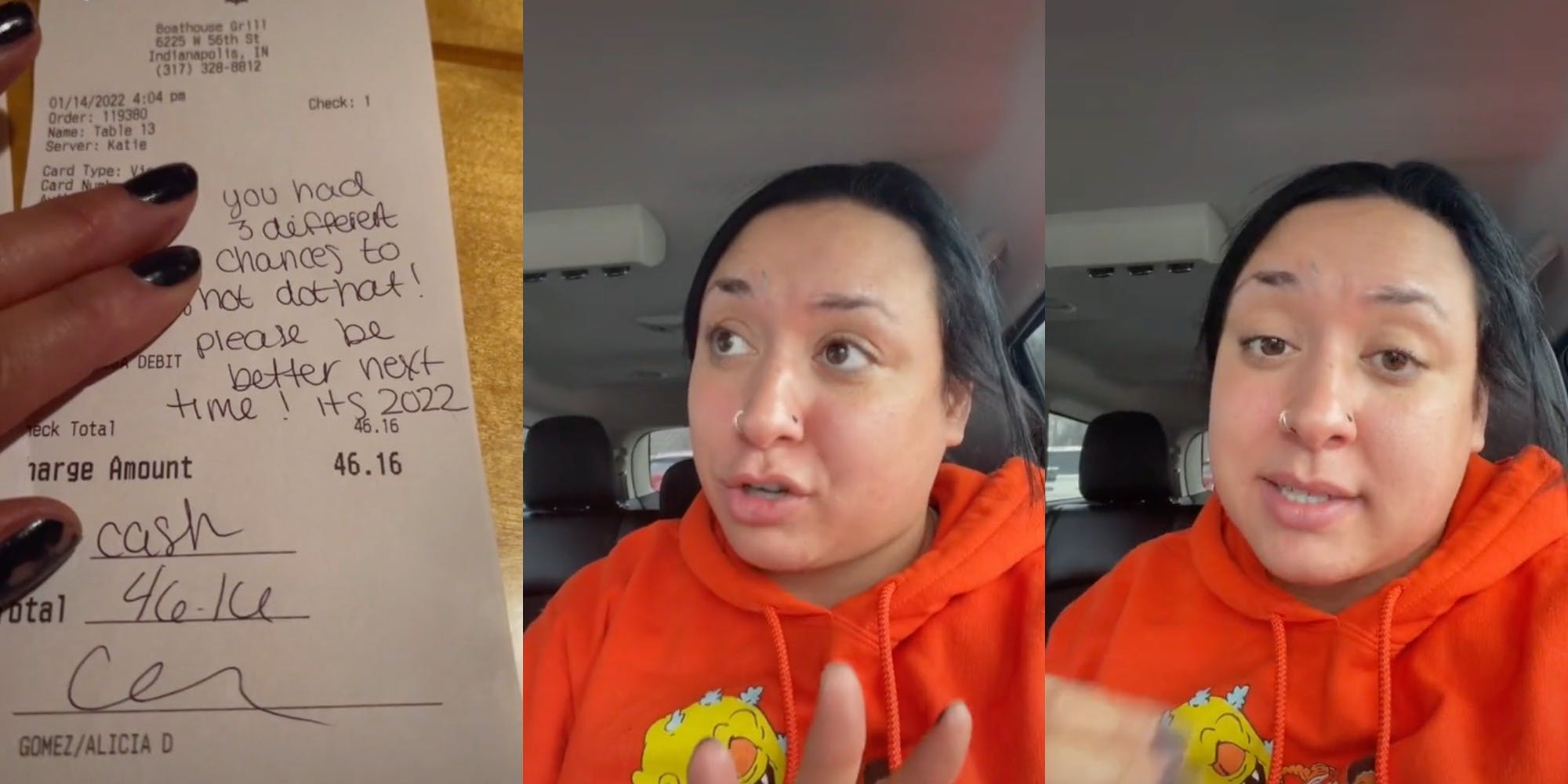 A woman on TikTok left a note and small tip for her Indianapolis restaurant server after the waitress repeatedly misgendered her boyfriend.

The TikToker, known as user @licibaby96, said she used to be a server and "hates" leaving bad tips, but she had to stand up for her boyfriend, who is a transgender man. Her video received about 1.2 million views on TikTok as of Saturday.

What a rude women! Like we told you 3 times ! You had no excuse to keep doing it ! At that point it’s disrespect ! I hope you have a horrible day!

The TikToker said that when the server first approached their table, she said, "Hey ladies." But the TikToker corrected the server, stating that her partner is a man. The server apologized for misgendering him, and the TikToker mentally acknowledged that the server was a bit "older," although she said that wasn't an excuse.

But when the server came back around, she misgendered the boyfriend again. User @licibaby96 corrected her a second time and told her "this is a fucking guy." The server apologized again and said she hoped the couple wasn't getting insulted.

"And I'm like, 'Well no, he's trans, so he probably is fucking getting his feelings hurt,'" the TikToker said in the video.

When the server came back with the couple's bill, she told them for a final time, "OK ladies, have a good fucking day." It's unclear if that is what the server said verbatim or if the TikToker added in the expletive during her storytelling.

"The ignorance is ridiculous," user @licibaby96 said in disbelief.

She said that people normally correct themselves and move on if she corrects them on her boyfriend's gender.

"But you fucking did that shit three fucking times," the TikToker said about the server. "You're lucky I tipped you at all. It's 2022, get with the fucking program. Oh my god. Just stop gendering people if you don't fucking know."

In a follow-up video, the TikToker said her boyfriend couldn't finish his meal and that he "just wanted to leave."

Viewers seemed to support the TikToker, agreeing that the server's age was no excuse for misgendering someone three times. Some speculated the waitress did it on purpose, and many believed that servers should use gender-neutral greetings as a general rule.

"I’m a [server] and when I don’t wanna misgender someone I always say “hey y’all” or “hey you guys” like come one it’s not that hard tbh," one viewer commented on the video.

In response, user @licibaby96 said, "Literally , I was a server , I misgendered someone 1 time ! And never used pronouns again!!!"

"Poor old lady. She probably wandered out of the nursing home this morning & thought she was waitressing back in 1902," another viewer said sardonically.

Several viewers said even a $5 tip was too much and that they wouldn't have tipped after an interaction like that.

"Leaving $5 is still generous because I wouldn’t have left anything lol," one user wrote.

"$5 was way too generous," another person said.

But the TikToker acknowledged that servers need tips to get by, and she wasn't going to withhold an extra $5 from her.

TikTok user @licibaby96 did not immediately respond to the Daily Dot's request for comment.