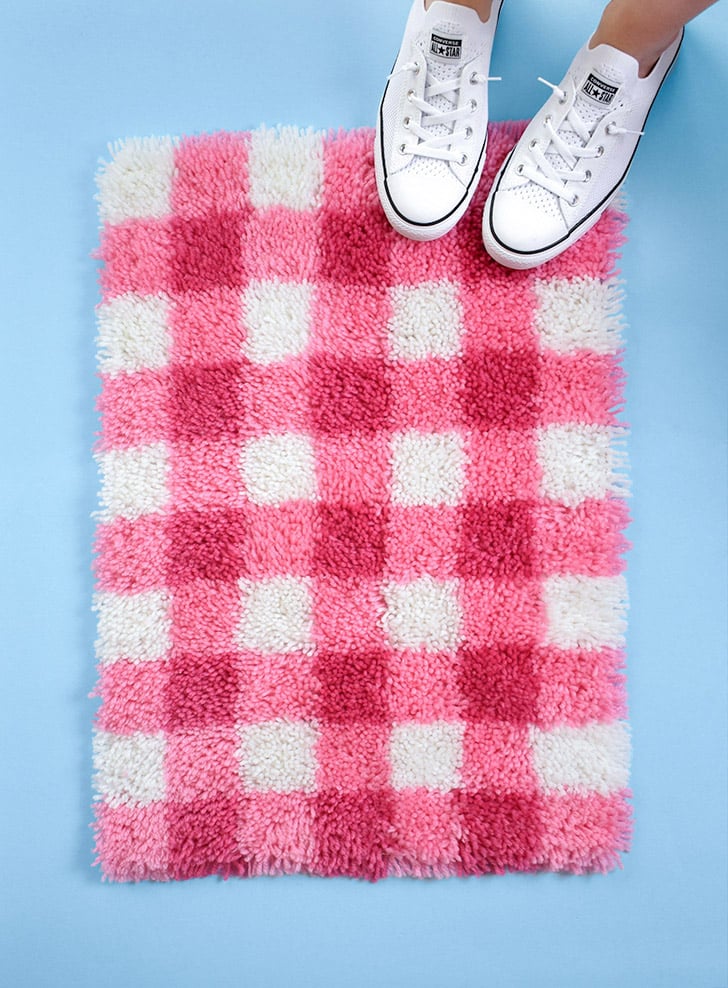 How to Make a Latch Hook Rug

Not only visually stunning, this gingham latch hook rug is also very easy to make. With a simple, repeating pattern it’s a great first time hooking project. These last few months have been a bit crazy. It’s so strange that I haven’t really left the house and, yet, I feel like I’ve hardly gotten anything done. You’d think my house would be spotless but it’s definitely not. You’d think I’d have gotten so many crafts made to post about but I have not. In all honesty, I have no idea where all of this time has gone. And it makes me feel kind of lazy. I’m trying to remember all of the things I have gotten done. I dug up a massive flower bed and got it planted. Like, it looks sort of tiny from the back porch but when you get over there you realize that it’s a pretty darn big area. It’s big enough it has taken 16 cubic feet of mulch so, yeah, not tiny. My living room, dining room and foyer got a fresh coat of white paint. Or, rather 3 because I was covering up a very dark tan and black (yes, actual black). That took some time… I’ve painted 2 pieces of furniture and I’ll be repainting one of them because it looks like a freaking #2 pencil. My recipe collection has grown by many, many new dishes. I’ve organized EVERY closet or cabinet in the house really well. Oh, yeah… and I made a gingham latch hook rug I bought the supplies for way back in 2017 but never got around to making. So HUZZAH for that! Want to make one yourself? Because I’ve got the tips, tricks and how to from start to finish to make your own latch hook rug. Supplies Needed to Make a Latch Hook Rug Latch Hook Tool Gridded Latch Hook Rug Canvas Yarn Yarn Needle Rug Backing (see options below) If you’ve never hooked a rug before you might want some details on the tools you’ll need to gather. If you have any questions not covered, be sure to ask in the comments! Latch Hook Tool A latch hook tool is inexpensive and most commonly found at craft stores. Sometimes you might be able to find them at Walmart. They come with both wooden or plastic handles. And as far as I can tell they’re all pretty much the same. Just grab whatever you can find and it should work just fine. If you’re super new to latch hook you can also often get them in a kit, like this one. A kit with everything you need makes for a great first latch hook project so you don’t have to source materials. You can also work on a smaller project and see if this is a craft you’re interested in pursuing. Rug Canvas A rug canvas is used to latch hook on to make a rug. This is what it looks like folded up. You’ll find them folded like this in store in a variety of sizes. Choose a size that is at least a few inches larger than you’d like your finished rug to be. My finished rug is 18.5″ x 27″ started as 30″ x 36″. I’ve purchased rug canvases from all over. I despise the ones from Hobby Lobby because they seem to fall part easily and make for wonky rugs that don’t have straight sides. My favorite rug canvas is made by MCG Textiles but they can be difficult to find. No matter which canvas you use, if making our adorable gingham print you’ll want a GRIDDED canvas. Meaning that there are grid lines in blue that divide the canvas into smaller squares. The rug canvas is made of straight and twisted fibers. You want to hook only on the straight lines, never the ones that are twisted. Latch Hook Yarn For a DIY latch hook rug, you can either cut your own yarn to size or you can purchase pre-cut latch hook yarn. Each individual piece of latch hook yarn is typically 2.5 inches long, so cut accordingly. I have cut my own yarn but it’s one of my least favorite things to do EVER. Seriously. EVER. I purchase my pre-cut latch hook yarn from Herrschners. They have a bazillion colors and it’s reasonably priced. And you don’t have to tediously cut a bazillion pieces. You just have to wait for it to arrive in the mail! Rug Backing Finished Latch Hook rugs used as is are SLIPPERY when on top of any hard flooring.  You can use a brushable rug backing that when applied to the finished backside of a latch hook rug makes it non-slip and also helps lock the individual yarn pieces into place.  It’s expensive but if you want to keep your rug together longer, it’s a good option. Typically I just purchase a non-slip rug pad and stitch it into place on the backside and call it good because it’s a LOT cheaper.  But it also takes more time to stitch it in that it would be to just brush something on and wait for it to dry. How to Use a Latch Hook Tool On a latch hook tool is an actual latch. It should be easily free moving but rest in a downward position with the tool is held upward. Wrap a piece of pre-cut rug yarn around the metal of the tool near its handle. Grab both ends of the single piece of yarn and try to keep the ends together evenly. Keeping the yarn in place, slide the tool under a straight (never twisted) line in the rug canvas. Pull the tool toward you so that the latch catches canvas. Wrap both ends of the piece of yarn around and into the mouth of the tool. Continue pulling the tool toward you. As you draw the tool toward you the latch will flip up and close the yarn into the tool’s eye. Continue pulling […]

The post How to Make a Latch Hook Rug appeared first on Dream a Little Bigger.

How to Make a Latch Hook Rug