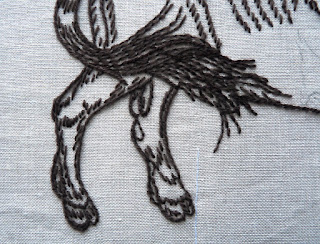 It's hard to make out all the detail in the image above, you really should be here in person. But then again, this piece was finished hours before the show it was in opened, and then it sold. I do hope the buyer will lend it when I have my big retrospective. (Don't hold your breaths, there is no retrospective in sight.) (But I'm working on it.) 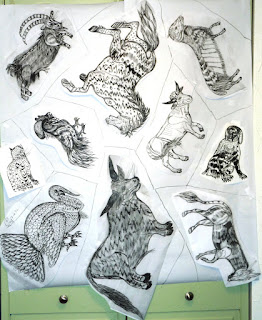 Louis Nicolas included a section on the domestic animals in his Codex Canadensis. Oddly enough, there was no pig, which, according to my friend Gaetanne who is descended from the earliest French settlers in New France, was often the only meat animal a family could afford. Anyway, I first thought of arranging them in a kind of crazy quilt or mosaic. 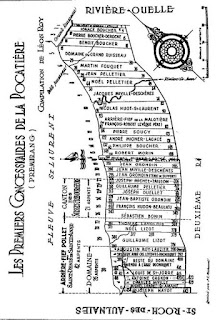 Then it was pointed out to me it made more sense for them to be in a row, and indeed, the long strip of land granted to the early settlers suggested a horizontal format. Blocks of land were granted to the seigneurs, who usually had done something notable in service to the French king, with the provision that the land be cleared and made "productive" so that the colonial claim on the land would be more established. The seigneurs divvied up the land into long strips, each with frontage on the river, as that was the main source of transportation in those days. Working class French men were allotted a strip each, and they paid rent in grain to the seigneur. They couldn't do it alone, so filles du roi ("daughters of the king") were imported from France to marry the men, produce children, and further establish the colony's foothold. 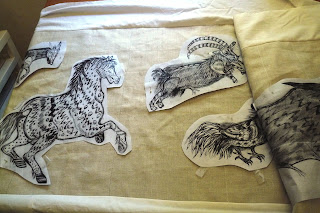 The critters fit obligingly into the long strip of cloth, and were traced on with my usual graphite transfer paper method. 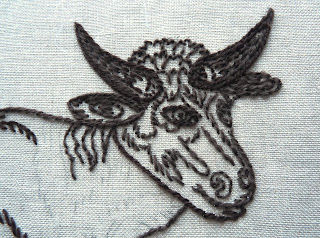 Interestingly, while the wild animals of the Codex were notable for their feverish eyes, snarling teeth and fearsome claws, the domestic animals are quite benign looking. Some even smile. 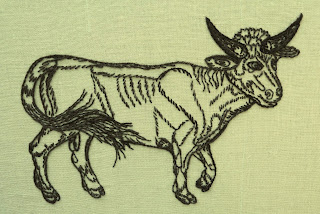 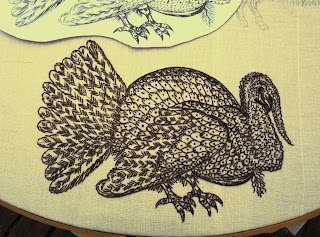 The turkey took quite a long time, with all his feathers. 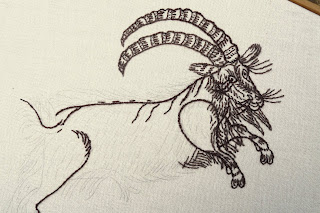 The ram is a very obvious copy from Conrad Gesner. 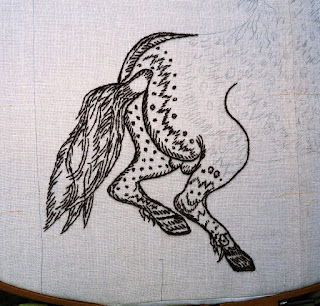 It's not every day that one can say, I stitched the horse's ass! 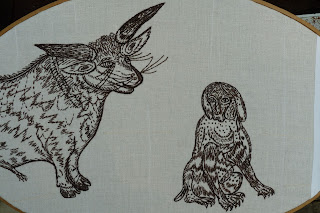 The dog and cat were especially bizarre in Nicolas's rendition. Although the stitching did help me realize that the dog doesn't have one giant foot with six claws, but that his front paw is on top of his back paw. 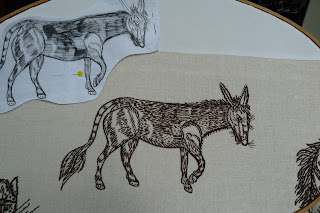 The meek donkey is just lovely. 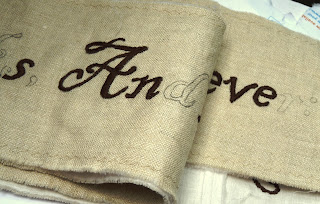 Since in the middle of stitching this I was offered a show I had to seriously pick up the pace. The quote was the last piece. There were 121 letters, I think, and I had ten days to stitch them. They were done on a separate strip of linen and sewn to the main piece. Then the whole piece was backed with another piece of linen with hanging strips pre-sewn into place. The piece was hung over the stairs leading up to the gallery. (Barb Mortell, who I shared the space with, had one of her quilts hanging below. It made for a very attractive entrance to the show. I'll post more pictures next time.) 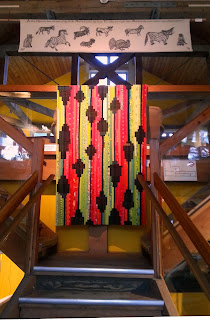