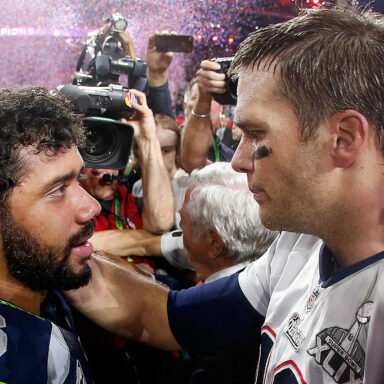 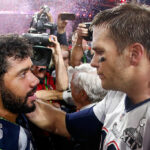 Sunday will be the 55th version of what is routinely called the “Biggest Game on Planet Earth,” otherwise known as the Super Bowl.

The game this year will feature what looks to be an epic quarterback matchup as 43-year-old Tom Brady will take on 25-year-old former MVP Pat Mahomes.

While the quarterbacks never actually “play” each other, or even are on the field at the same time until they shake hands at the end, it’s always fun to look at the biggest high-profile players on each team, and in almost every case it’s the quarterback.

Since the start of the Super Bowl in 1967 (actually it was then known as the AFL-NFL Championship Game) there have been some amazing quarterback battles between number one picks, Hall of Famers, and players that have cemented their place in history with how they have played in the big game.

Today we take a look at the “Top 10 All-Time Greatest Super Bowl Quarterback Matchups,” highlighting some of the great performances on the biggest stage of the biggest game.

Two legendary quarterbacks going at it in an early Super Bowl down in Miami in a game known for Joe Namath’s “guarantee” of a Jets win.

This might have been higher on the list, but first off Unitas wasn’t even the starter for the Colts, it was actually Earl Morrall, who played awful as the Jets defense dominated.

Namath, who won the MVP for the game didn’t exactly light up the scoreboard with his numbers, going 17-for-28 for 206 yards without a touchdown. He truly was ‘game manager’ in the Jets upset 16-7 win.

Nevertheless, it was a game that you can look back on with two legendary quarterbacks vying for a title. It also put Namath and the Jets on the map.

Two of the NFL’s bedrock franchises went at it in Dallas as the Packers took the Lombardi Trophy home, beating the Steelers 31-25 in a game defined by big plays and a lot of offense.

Rodgers outplayed Roethlisberger, throwing for 304 yards and three scores on 24-for-39 passing. He always seemed to come up with the big plays when needed against a soft Steelers secondary.

Down 21-3 the Steelers rallied led by Roethlisberger, as he hit Hines Ward from 8 yards out with :39 seconds to play in the first half to close it to 21-10.

Pittsburgh would get close a few times in the second half, but it was Rodgers who shined just a bit brighter on this night, as he and the Pack did enough to pull out the six-point win.

Many call this the greatest Super Bowl of all-time, a battle between Tom Brady and Seattle vaunted “Legion of Boom” defense.

The game was a back and forth affair, with New England finding themselves down 24-14 entering the fourth quarter.

Leave it to Tom Brady to do what he does best, which is put together two touchdown drives, the second with 2:02 to go to Julian Edelman making it 28-24.

Everyone remembers the pick, as from the New England one it was Malcolm Butler stepping in front of intended receiver Ricardo Lockette to steal the win.

If you were a fan of either team you probably needed to check your heart rate after the interception that sealed New England’s win.

It was the coming out party for the silver and black, as the team finally got over the hump winning a Super Bowl for future Hall of Fame coach John Madden.

Oakland dominated Fran Tarkenton and the Vikings 32-14, and the future Viking Hall of Fame QB was mostly ineffective, going 17-for-25 for 205 yards with a touchdown and two picks.

The Raiders running game was the biggest story, running over the famed “Purple People Eaters,” for 266 yards on 52 carries, an average of 5.1 yards per rush.

Tarkenton was pulled late in the game for backup Bob Lee, who led Minnesota to their second touchdown of the game with :25 seconds left.

Both of these quarterbacks will be sitting in Canton one day at the Pro Football Hall of Fame, but on this day in Miami the two legendary QB’s went back and forth in a memorable shootout eventually won by the Saints 31-17.

Brees was sensational, going 32-for-39 for 288 yards and two scores with a 114.5 QB rating. He was the MVP of the win, coming up with big plays for the Saints when needed.

Manning, playing in his second Super Bowl, made the critical mistake of the night, throwing a pick six to the Saints Tracy Porter who took it 74 yards to put the Saints up by two scores with 3:12 to play.

New Orleans scored the last 18 points for the win. Their defense held Manning to 31-of-45 passing for 333 yards with a pick and score in the Colts setback.

The beginning of the Pats dynasty, this game featured a wide-eyed Tom Brady outplaying Kurt Warner who had won a Super Bowl the season before gaining the game’s MVP award.

This day belonged to the Patriots defense, which hammered the Rams receivers and made life tough for Warner all day.

Warner played well in the final quarter as the Rams rallied from down 17-3, scoring two touchdowns in the final 9:31 to tie up the game.

Brady’s pinpoint passing on the final drive was the reason the Pats pulled out the win, as he drove the ball to the Rams 30 to allow Adam Vinatieri’s 48-yard field goal on the final play to seal the win.

The NFC had dominated the Super Bowl throughout most of the 1980’s and 90’s, and finally on this day John Elway got the monkey off of his and the AFC’s back with an exciting 31-24 win over the Green Bay Packers.

Brett Favre was at the top of his game, and on this day the Broncos defense was up to task against the Hall of Famer.

The Packers QB went 25-for-42 for 256 yards with three touchdowns and a pick in the seven-point Packer loss.

Elway went just 12-for-22 for 123 yards with a pick, but his main job on this day was giving the ball to running back Terrell Davis who ran for 157 yards and three scores.

The play of the game that everyone recalls is the famous Elway ‘helicopter’ run that resulted in a first down deep in Green Bay territory.

The following year Elway went out the perfect way, on a platform holding up another Lombardi after winning the game’s MVP against the overmatched Atlanta Falcons.

The Dallas Cowboys were in the midst of a dynasty of their own in the early 90’s, and they had the Buffalo Bills’ number in two straight Super Bowls in 1992 and 1993.

Aikman took home the MVP of the first Dallas win, as they crushed Buffalo 52-17 in a game remembered for the Bills’ 9 turnovers.

Kelly was knocked out early after attempting just seven passes, before he left he threw for just 82 yards and two interceptions.

The next year Buffalo looked a lot more poised as they held Dallas to just six first half points, leading the game 13-6 at half.

Then the bottom dropped out, as just 45 seconds into the third quarter Thurman Thomas fumbled, James Washington took it 46 yards to tie the game at 13.

Emmitt Smith who ran for 132 yards and two scores was the MVP of the second Dallas victory.

All the talk entering Super Bowl XIX was about Dolphins strong armed QB Dan Marino, who had thrown for over 5000 yards and 48 scores in leading Miami to a 14-2 mark.

Joe Montana didn’t say much in the week leading to the game, but let his play on the field speak for itself as the 49ers dominated the Dolphins 38-16.

Montana, who was the game’s MVP, was sensational, using play action and quick passes to keep the Dolphins defense on their toes.

In the end Montana went 24-for-35 for 331 yards and three scores, while his counterpart in Marino was held to 29-for-50 passing for 318 yards with a touchdown and a pair of interceptions.

San Francisco’s defense combined with Montana broke the game open in the second quarter, as they outscored Miami 21-6 to take a 28-16 lead at halftime.

The Niners scored 10 more third quarter points to put the game away. Oddly enough, Montana and Marino did a diet pepsi commercial that aired after the game.

It’s hard to overlook this amazing pair of matchups between two Hall of Famers in Bradshaw and Staubach, who played in a pair of Super Bowls in 1975 and 1978.

These were two tremendous Super Bowls that could have gone either way, but in the end it was Bradshaw who was just a little bit better in each one holding off Staubach and Dallas.

The first game was a 21-17 slugfest in Miami in which Lynn Swann made three amazing plays on passes from Bradshaw, earning the game’s MVP.

Bradshaw went just 9-for-19 for 202 yards and two scores in the first game, while Staubach threw for 204 yards but was intercepted three times by the Steel Curtain defense.

Game two a few years later was even a better game, as the Steelers built what looked to be a insurmountable 35-17 lead with 6:51 left, but it was Staubach who put on his comeback cape and nearly pulled out a win.

He threw touchdowns with 2:27 and after the Cowboys got an onside kick they scored again with :22 seconds left to make it 35-31.

Rocky Bleier recovered the second onside kick, sealing the win for the Steelers.

Bradshaw played excellent in this game filled with Hall of Famers, throwing for 318 yards with four touchdowns and a pick.

Staubach threw for 228 yards, three scores and an interception. The MVP went to Bradshaw, who would go on to win another MVP the next year as the Steelers defeated the Los Angeles Rams 31-19 to end their dynasty.