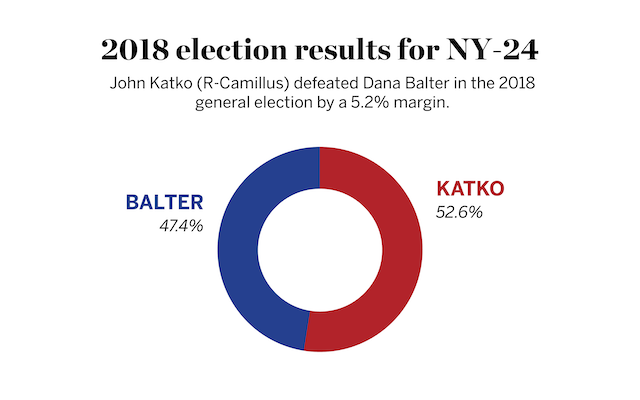 Katko’s fear mongering shows his weakness on the debate stage

The Daily Orange is a nonprofit newsroom that receives no funding from Syracuse University. Consider donating today to support our mission.

Monday’s congressional debate between Republican John Katko and Democrat Dana Balter underscored the simple fact that this year’s contest for New York’s 24th Congressional District is a race between a follower and a leader. The debate, if you could call it one, boiled down to a series of deceitful, fear-mongering statements from incumbent Katko, which were the ever-sharp Balter subsequently corrected.

Balter may be a progressive, but her campaign style harkens to the traditions of old. She’s provided voters with her vision for a brighter future in the United States, a call to action that seeks to inspire and engage. Hers is a candidacy of optimism in a time of great social and economic upheaval, reminiscent of past progressive triumphs such as Franklin Delano Roosevelt’s New Deal and Lyndon B. Johnson’s Great Society.

Her opponent’s campaign embodies the kind of modern candidacy that has become all too familiar to Americans in the past three decades. Katko has no vision for the country’s future. He doesn’t want progress, and since a platform of stagnation isn’t as catchy as a visionary one such as Balter’s, Katko has to resort to the fear-mongering that is commonplace in contemporary American politics.

Candidates used to offer voters their best pitch for the country’s future: goals to strive for, plans to help those in need and calls for camaraderie. Now, candidates such as Katko have to scheme up an abstract bogeyman to scare voters away from the other candidate.

Roosevelt said we have nothing to fear but fear itself. Katko says we must fear everyone who isn’t him. Rather than illustrating the U.S. he wishes to build, Katko’s campaign is determined to describe the country he wishes to avoid, associating that nightmarish scenario with his opponent.

What Katko doesn’t realize, though, is that we’re already in that nightmarish scenario. Wildfires and droughts have wreaked havoc in the west, unprecedented heatwaves and tropical storms have bombarded the south. In our cities, residents protesting against police brutality have clashed with counter-protesters and police, and the coronavirus pandemic has claimed the lives of approximately 220,000 Americans.

In a sense, Katko is correct: We are at a crossroads, and we can choose to continue down this path with him, or we can turn down a new path with Balter.

Katko spent more time Monday trying to stoke fear instead of offering productive solutions and ideas, encouraging people at one point to be concerned about the tax spikes that will inevitably come from Balter’s policies. But he conveniently ignored the fact that both Balter and former Vice President Joe Biden have repeatedly stated that the only tax increases they support are on Americans making more than $400,000 a year. For Katko, tax increases are his last crutch, his last bogeyman.

On the environment, Katko joked that he agreed with Balter on the importance of taking bold policy steps to address climate change. But he continues to stand by President Donald Trump, whose administration has waged war on the environment for four years.

Selling federally-protected public land, pushing for the construction of the disastrous Dakota Access Pipeline and removing the U.S. from the Paris Agreement has had direct, calamitous effects on our environment, effects that may take decades to fix.

Katko is correct. He and Balter agree that climate change poses an existential threat to our world as we know it. But the representative is comfortable letting his boss destroy that world anyway.

On social issues, Katko floundered through an attempt to acknowledge police brutality without upsetting his base by actually declaring it a systemic, national issue. Katko, who served as a prosecutor for 20 years, never addressed police brutality in the U.S. until he was forced to, which Balter quickly pointed out.

The representative has also made it clear that Trump’s conduct is indefensible. Nevertheless, Katko stands by Trump, demonstrating just how easily he can sacrifice his ethics. Katko’s moral compass is as empty as his office downtown.

He’s in the pocket of party bosses and lobbyists, who pay him to stand back and stand by as they make millions off the opioid epidemic and rake in even more profit from this White House’s “small business” relief payments. For as much as Katko likes to pay lip service to the opioid crisis, Big Pharma likes to pay him even more to do nothing about it.

Throughout the debate, Katko ironically made a point of invoking ethics at every turn. According to Katko, Balter accepting money from her campaign too early — then immediately returning the funds after learning that it breached campaign regulations — is illegal, criminal and unethical.

But somehow, Katko remains curiously quiet about Trump’s evasion of taxes, even though, in 2017, Katko signed on to a plan to force Trump to turn over his taxes, then promptly voted against that same plan.

Likewise, the representative didn’t bat his eye when the president set the stage for the country’s wealthiest residents to pay less in taxes than the working class.

While Katko may eventually muster up enough self-respect to tweet a condemnation of the president’s federal tax evasion, his suggestion during the debate that he is a check on Trump’s rhetoric is comical. Katko isn’t even a blip on the White House’s radar.

His reluctance to break from the president is inconsistent with his disapproval of Trump in 2016, but it is consistent with Katko’s tried-and-true ability to recognize something as unethical and do it anyway. Can this really be the same man who said in 2016, “I cannot support Hillary Clinton, but Donald Trump has not and will never earn my vote?”

Self-preservation is Katko’s single governing principle. Throughout his tenure, Katko has demonstrated a penchant for moving with the herd.

Patrick McCarthy is a graduate student in the magazine, online and digital journalism program. His column appears bi-weekly. He can be reached at pmcca100@syr.edu. He can be followed on Twitter at @pmcopinion.

The post Katko’s fear mongering shows his weakness on the debate stage appeared first on The Daily Orange.

Katko’s fear mongering shows his weakness on the debate stage