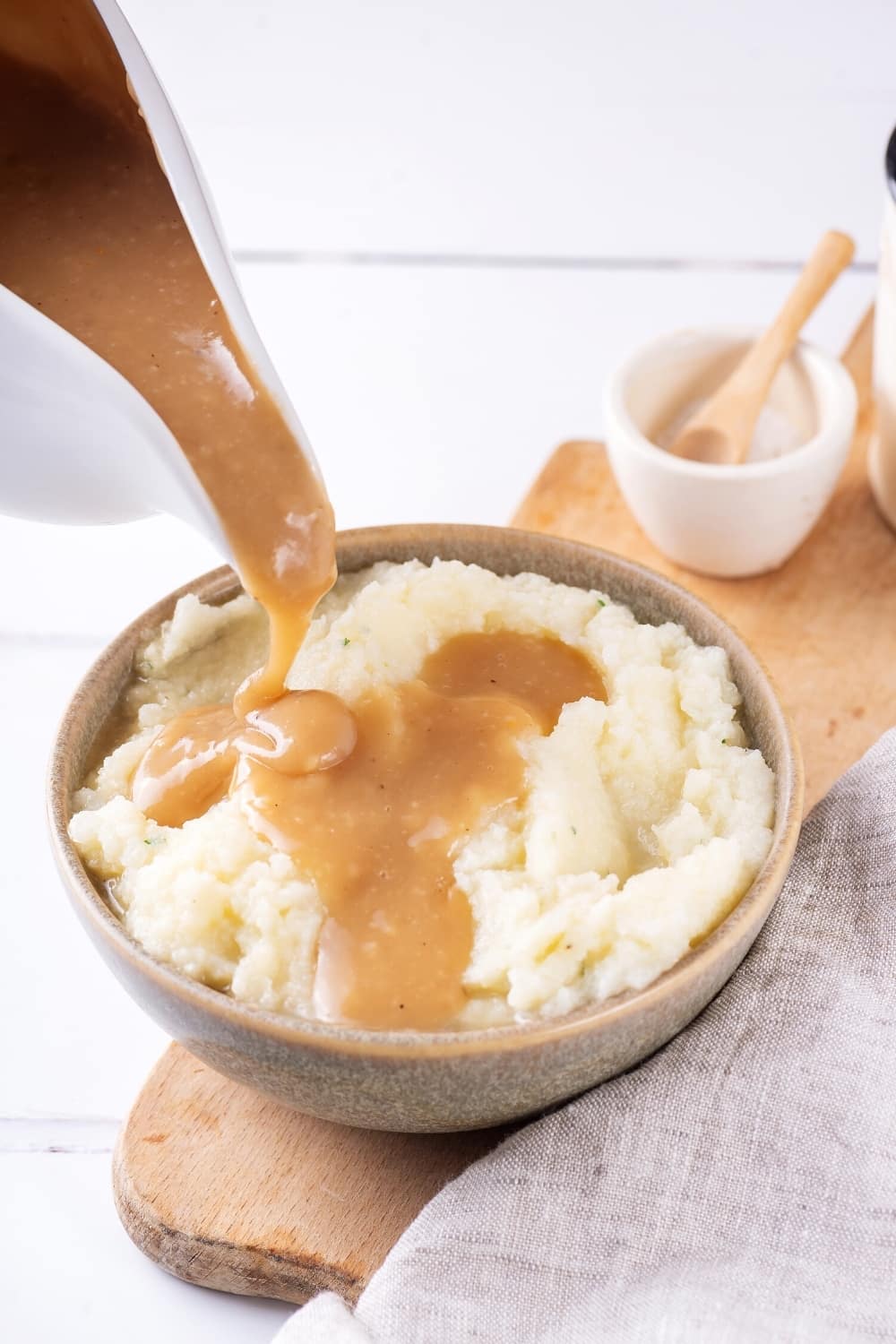 This keto gravy has everything you love about homemade gravy, but it has 0 NET CARBS and is gluten free! It is super flavorful, perfectly thick, and goes so well on a variety of dishes. And all it takes to make it is about 5 minutes!

There aren't many things better in the Fall than warm gravy on a savory dish.

And, let's be honest, comfort food doesn't get much better than some mashed potatoes covered in brown gravy from scratch. It is one of the best food pairs out there, especially for Thanksgiving dinner.

But unfortunately, regular mashed potatoes and gravy are super high in carbs and don't work for the keto diet.

Well, you can put the days of missing out on all that potato/gravy deliciousness in the past. With this keto gravy recipe - and, of course, this keto mashed potatoes recipe - you can enjoy this classic comfort food combination in a totally low carb keto friendly way from now on.

And the two combined only have 3 NET CARBS, so you'll have plenty of room to enjoy some more Thanksgiving staples like these keto biscuits!

Ok, so for this low carb gravy, you'll only need a few basic ingredients.

And I can almost guarantee you have every single one of them - except maybe the beef broth - in your kitchen already.

Here is what you'll need:

As you may have noticed, one of the main differences between this keto gravy and regular gravy is that we will not be using any flour.

And not only does skipping the flour keep this gravy super low carb, but it also makes it a gluten free gravy recipe too!

HOW TO MAKE KETO GRAVY

As I've already alluded to, this homemade gravy is super quick and effortless to make!

All you really have to do is add the ingredients to a saucepan, mix them, and wait for the gravy to thicken up.

And the entire process will take just over 5 minutes, so you can whip this gravy up in no time.

First, take out a medium saucepan and put it over medium-high heat.

Then add all of the ingredients to it - the butter, beef broth, onion powder, garlic powder, and xanthan gum, and whisk them together to combine.

Then, after giving them a good whisk, bring the mixture to a low boil.

Once the mixture is boiling, turn the heat down to a simmer and occasionally whisk them over the course of a few minutes.

Now all that's left to do is to transfer the gravy to a gravy boat, and serve.

By the way, if the gravy is too thick, just add a little water and it will help thin it out.

WHAT TO PUT THIS GRAVY ON

Of course, the best thing to put this keto gravy on are these keto mashed potatoes. But it goes really well on a ton of other recipes too!

Try pouring it on some of these:

HOW TO STORE KETO GRAVY

This keto beef gravy recipe makes just over eight, ¼ cup servings. So you'll have plenty to pour over whatever you want!

And if you have some leftover, you can store it in an airtight container in the fridge for up to 2 days.

Then, to reheat the gravy, put it in a saucepan over low heat and frequently stir until it simmers or reaches your desired temperature.

Or, you could put it in a microwave-safe dish and microwave for a few seconds until warm. Just make sure you give it a good stir before microwaving.

Also, if you need to thin the gravy out, just add some water to it.

FAQS ABOUT THIS KETO GRAVY RECIPE

Most brown gravy recipes call for a thickener, such as cornstarch or flour, which are not keto friendly ingredients.

To ensure your brown gravy is keto, you'll want to substitute cornstarch - or flour - for a low carb thickener such as xanthan gum (more options below).

Xanthan gum is the best keto gravy thickener to use because it has 0 NET CARBS. And it also just works the best to create a thick gravy consistency.

Other thickeners include (but are not limited to) guar gum, glucomannan, agar-agar powder, and gelatin.

Where can I find xanthan gum in store?

Xanthan gum is typically found in the gluten free or baking section at grocery stores.

And if you can't find it there, you can get it online here.

WRAPPING IT ALL UP

Well, that's how to make keto gravy with 0 NET CARB!

Serve this gravy at Thanksgiving or your next family dinner. No one will be able to tell that it is a low carb gravy, and everyone will love it!

As always, if you make this recipe, be sure to leave a comment below and let me know what you think.

Oh, and if you are serving this at Thanksgiving, you might want to make this keto pumpkin pie or keto pumpkin cheesecake for dessert! 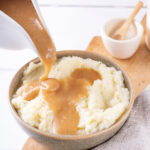 This keto gravy has everything you love about homemade gravy, but it has 0 NET CARBS and is gluten free! It is super flavorful, perfectly thick, and goes so well on a variety of dishes. And all it takes to make it is about 5 minutes!

The scale up function does not change the gram measurements.

The post Keto Gravy Recipe With 0 Carbs | Made In Just 5 Minutes appeared first on The Diet Chef.