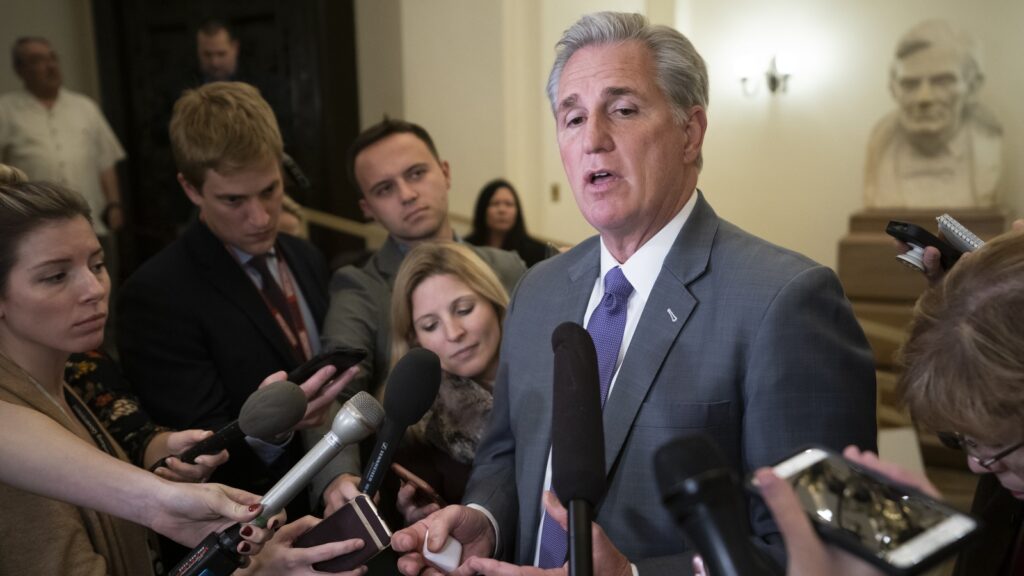 House Majority Leader Kevin McCarthy, R-Calif., speaks to reporters as he returns to the Capitol from a bipartisan meeting with President Donald Trump about border security and ending the partial government shutdown, in Washington, Wednesday, Jan. 2, 2019. (AP Photo/J. Scott Applewhite)

Normally, to get this much repetitive “na-na-na-na”-ing from a McCarthy you’d have to put the 10 hour YouTube version of the Beatle’s “Hey Jude” on. But to be fair, House Minority Leader and wannabe Speaker Kevin McCarthy (R-CA) only went on, and on, and on, for eight and a half hours last night.

The California Republican broke Speaker Nancy Pelosi’s record for the longest House floor speech, clocking in at more than eight-and-a-half hours in opposition to the Democrats’ $1.7 trillion Build Back Better Act. McCarthy stretched the “magic minute” afforded to congressional leaders to its extreme. McCarthy’s staff has been planning this for some time, but kept it secret from everyone.

McCarthy finally yielded the floor at 5:11 a.m. The House will be back in session at 8 a.m., with Pelosi set to speak. There will be a procedural motion to recommit and then a vote on final passage of the BBB.

“I don’t know that this speech is going to make a difference,” McCarthy said just after 3 a.m. Of course it won’t. The BBB looks like it is going to pass at some point this morning. Rep. Jared Golden of Maine is the only Democrat who has publicly declared their opposition at this point.

Yet standing on the floor all night, railing against a major piece of legislation being pushed by President Joe Biden and Pelosi, is a solid way to grab national attention. It’s good “member management” for McCarthy too, who can now say he fought against a bill that he can’t stop. Remember, one of the chief complaints from the right is that their leaders — other than former President Donald Trump — don’t fight hard enough. McCarthy is essentially saying “Here’s the fight.” Will this change the politics around the bill? No, probably not. But alas.

Remember: Pelosi spoke for eight straight hours in 2018 when she was in the minority, trying futilely to convince Republicans to pass immigration legislation. GOP lawmakers rolled their eyes at the move. Democrats are rolling their eyes now. McCarthy beat Pelosi’s record just before 5 a.m.

Speaking for this long allowed McCarthy to push out a lot of partisan talking points and razz Democrats for hours on end.

“Could she be the speaker in modern history — one of the few to lose the House twice and lose the most seats? I don’t know,” McCarthy said of Pelosi at one point. McCarthy reminded anyone listening that Pelosi went to Europe three times during the last several months even while trying to pass the BBB.

These are just some of the digs he got in. The members sitting behind him — including Rep. Madison Cawthorn (R-N.C.), who seemed to have a wad of chewing tobacco in his mouth, spitting into a GNC bottle — applauded enthusiastically.

So, in sum, McCarthy is no longer speaking. And Democrats will push through the BBB later today.

This eye-rolling bit of performative theater has everything to do with McCarthy being thiiiiiiis close to being the Speaker of the House. He was denied that position once before, when the late Walter Jones and others kneecapped him over scandal accusations and the GOP went begging to Paul Ryan to take the job instead. Now, with a looming midterm and the historical trends that come with it, coupled with redistricting, the Republican Party is favored to retake the House of Representatives in 2022.

But Kevin McCarthy isn’t stupid. The in-frame for the cameras cheerleading by Rep. Cawthorn isn’t an accident, nor was Leader McCarthy’s public pronouncements yesterday that Madison’s fellow Trump hardliners Reps. Paul Gosar (AZ) and Marjorie Taylor Greene (GA) will get their stripped committee assignments back when/if he becomes Speaker. Minority Leader Kevin McCarthy is feeling that there are plenty of others that would rather he not become Speaker McCarthy, and he senses — probably correctly — that the most ardently pro-Trump folks might have their own designs that don’t include his baggage. There is also plenty of personal ambition to go around before the Speaker vote to decide who would swing the gavel. Rep. Steve Scalise (LA) might want to move up from GOP number 2, and Elise Stefanik (NY) didn’t go all in on a personal rebrand just for the number three leadership position.

Kevin McCarthy has been in congress a long time, has made plenty of enemies, and doesn’t appear to have made many friends. He certainly doesn’t seem to have wide respect in the caucus. Most importantly, Kevin McCarthy knows this better than anyone, and his actions show it. He’s sooooo close to getting what he’s always wanted, what was denied to him before, what will make all the trials and tribulations of the last few years all better.