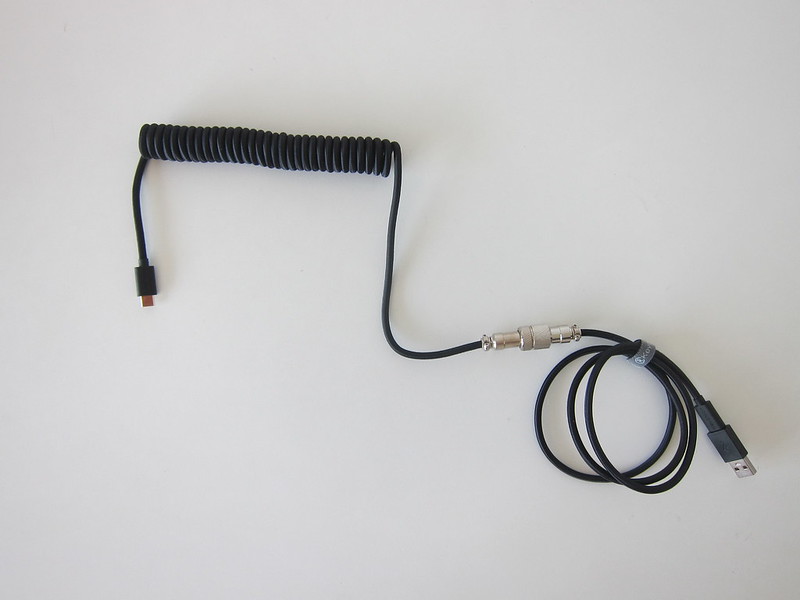 I think Keychron K7‘s battery life is bad. Using it for about 8 hours a day, it could not even last through a 5-day work week on a single charge.

I disabled the auto-sleep mode because, for some reason, when the keyboard wakes up from sleep, it refuses to connect back to my MacBook Pro via Bluetooth.

So to prevent both problems, I decided to stick to wired.

The default packaging comes with a USB-C to USB cable, but it is not coiled. There is no difference in functionality, just aesthetics.

So I decided to get the Keychron Coiled Aviator Cable for US$15 (S$21), and shipping to Singapore is an additional US$6 (S$8). The total cost is about S$29, which is much cheaper than most coiled cables sold on Lazada or Shopee.

I thought I would need to get a USB-C to USB-A adapter since the USB hub on my Razer Core X has only USB-A ports. But Keychron is kind enough to include the adapter in the package.

Again, there is no functionality difference between a straight and a coiled cable. It is purely aesthetics. So being vain, I paid $29 to make the cable neater and look better.