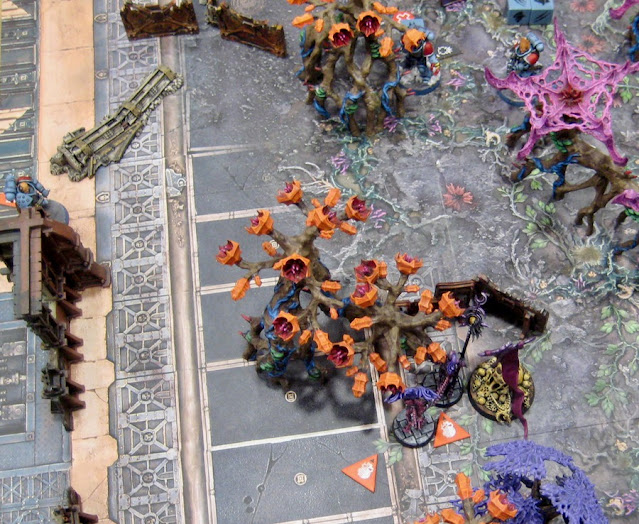 Kill Team - Daemons in the Woods

Since our FIRST GAME, last Thursday, went so quick, we set up a second game. I quickly grabbed a dozen Daemonettes of Slaanesh (that I'd been wanting to try out) and away we went!

We played the Eliminate Target scenario out of the Octarius book. Essentially, one Kill Team (the Space Wolves) is trying to take out the Enemy leader. according to the fluff, the leader is overseeing plans for the big push and muxt be stopped. The Defender scored points if their leader stays within a 3" radius area centered 6" from the center of the Kill Zone and does a special Mission Action.

We said the Daemonettes were up to no good and trying to perform a dark ritual to open a reand in the fabric of reality and have many of their brothers and sisters pour forth into real space! The Leader was doing the "Oversee RITUAL" action. 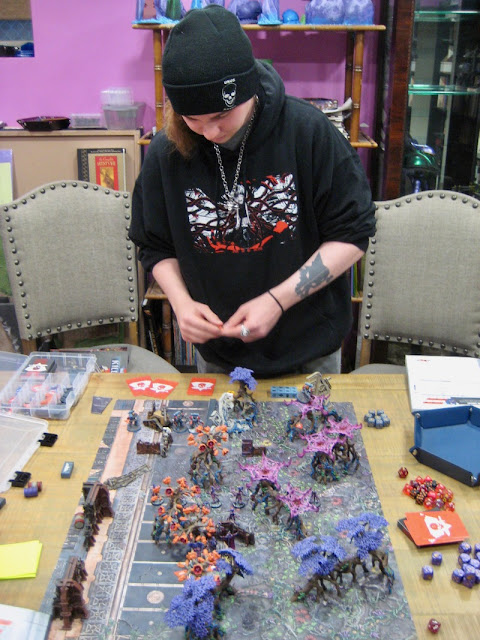 All set up and ready to go! 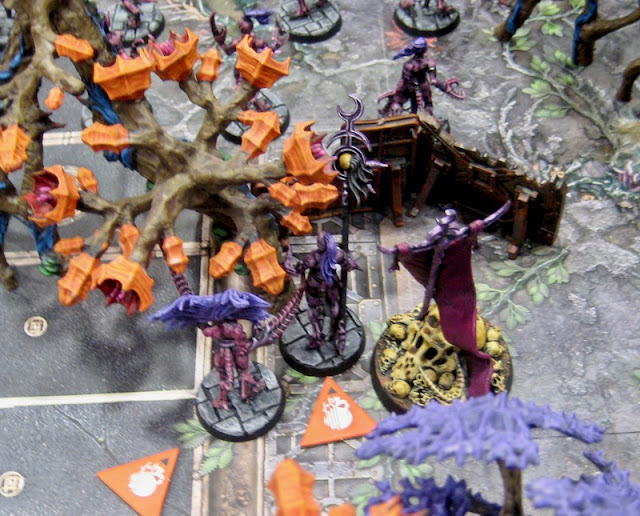 Aluress and the Icon Bearer. I kept the Icon Bearer back as it had a special ability that can cause all Daemonettes within 3" to be Invigorated by Chaos and, while so invigorated, improve their Invulnerable Save by one! 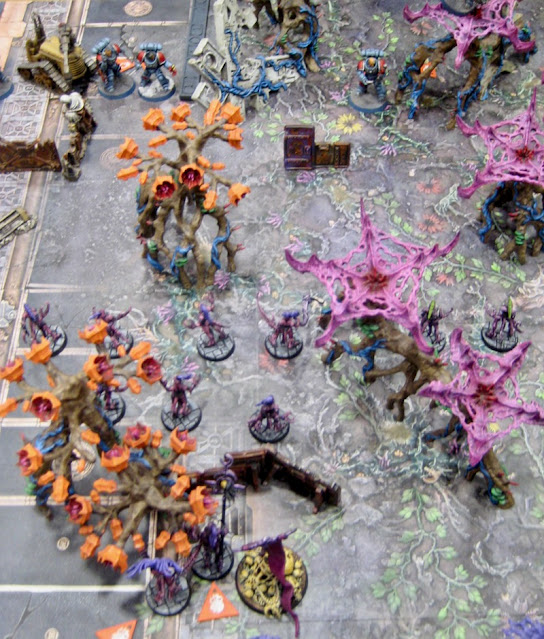 Because all the daemonettes have are melee weapons I thought it would be SUPER SMART to just set them up as close as possible to the enemy and just charge straight at them....

I'd LITERALLY just played a game against this team of Space Wolves and saw, first hand, how nasty those bolters can be - especially with the Bolter Discipline Strategic Ploy in play... each Intercessor firing twice.... oh, and then again for Overwatch...

This should have been an OBVIOUSLY BAD IDEA....

But I am not the smartest Daemon in the Warp... 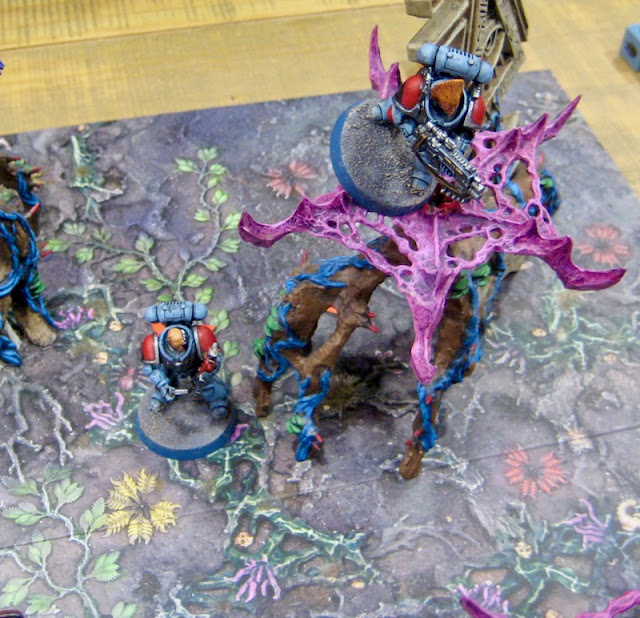 The dude with the Grenade Launcher was parked up in a tree. 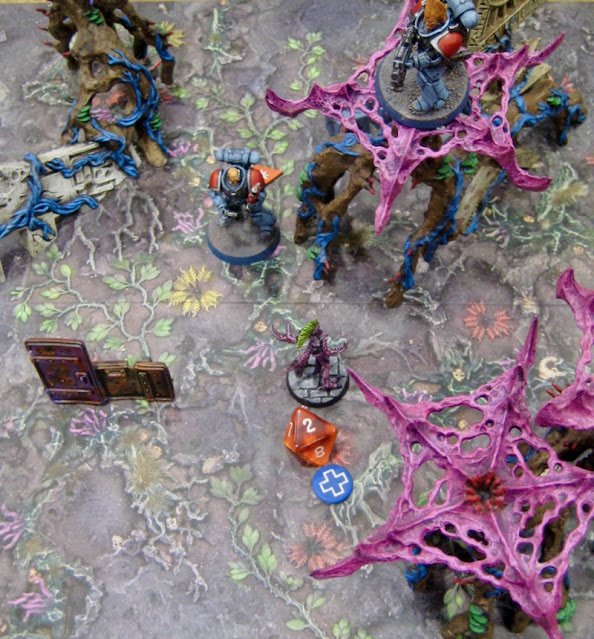 I did give one (or two?) of the Daemons Alluring Musk... which works a little like a weak flamer that causes Stun on a Crit... 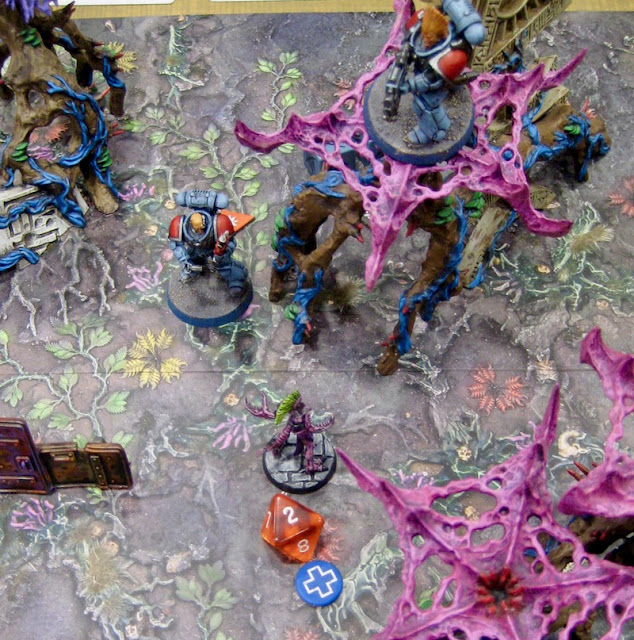 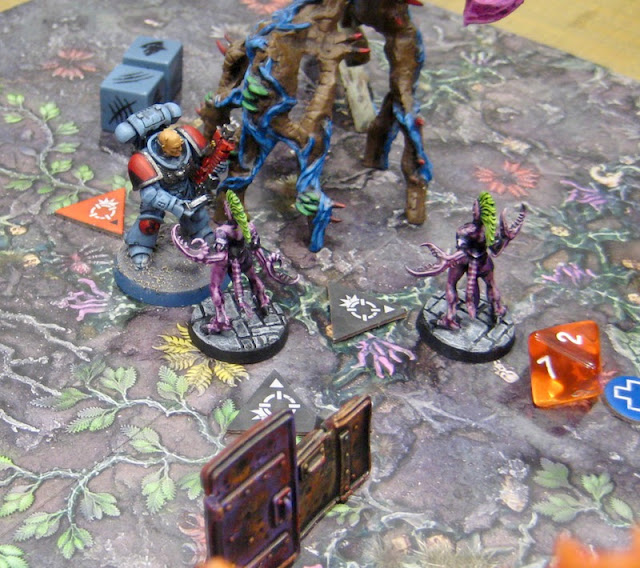 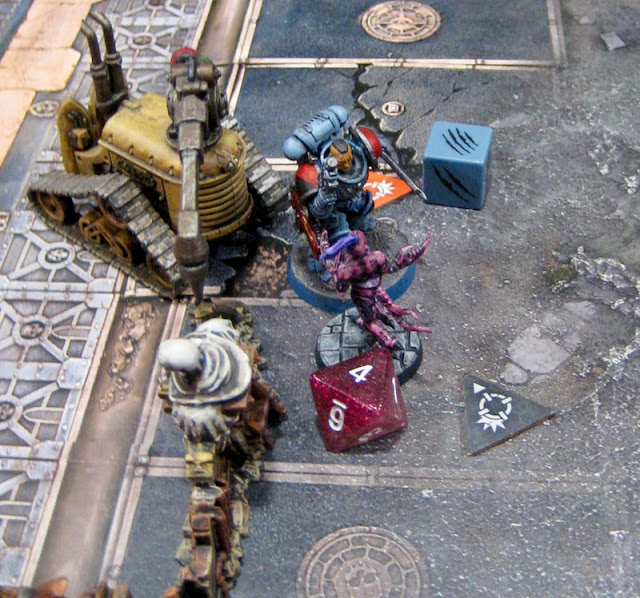 It was kind of a slaughter. 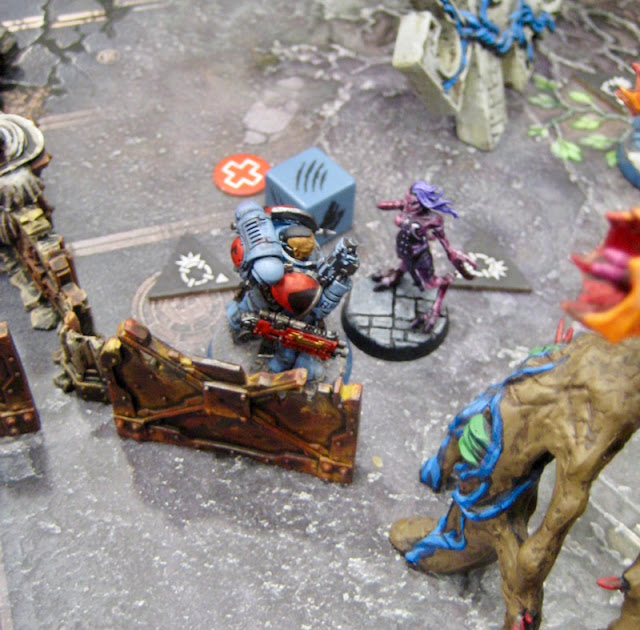 Seriously, they all got slaughtered in the first turn. And I should have seen that coming.

Somehow I thought taking the fight TO the enemy might keep them busy in their own deployment area and as far away as possible from my leader who was busy doing some lewd dance and chanting some ritual...

What I really SHOULD have done is given them ALL conceal orders and hid them in cover and let the damned marines come to us... offer up ZERO targets in the First Turning point and maneuver to POUNCE in Turning Point Two, only changing to Engage orders as they were activated.

As it was, teh Marines had to spend the Second Turning Point just wading through the melting corpses of the Daemonettes to get TO the Leader! 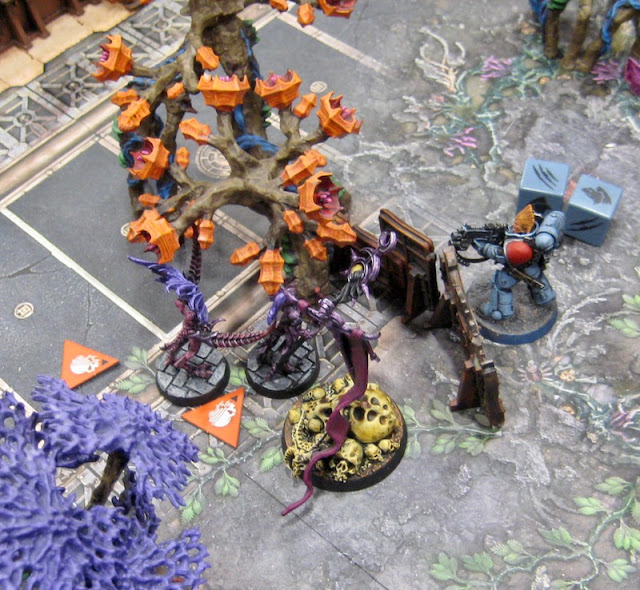 The had the initiative in the Third Turning Point and got into BLAM the Icon Bearer BEFORE it could even DO it's special buffing action. 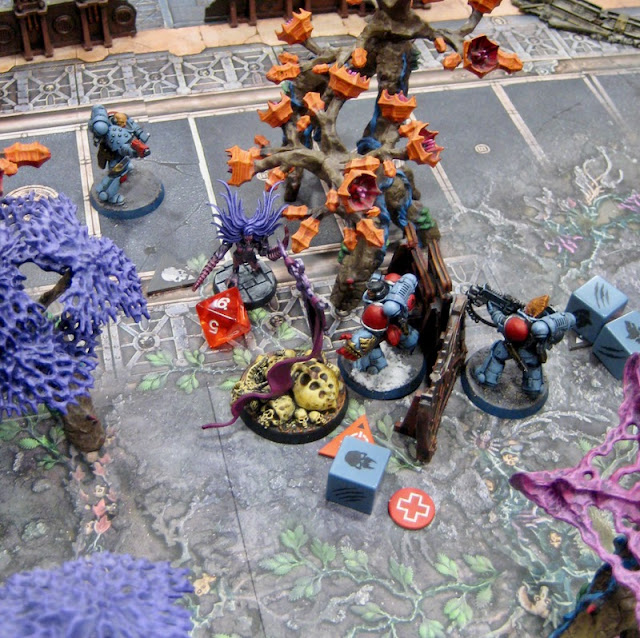 I did ONE LAST Oversee action to score 6 VP before the Sergeant charged in with his Power Fist and squished the Alluress in his grasp.

So the Space Wolves scored 9VP for taking out the leader and another 3 for controlling the zone at the end of the game... and I think there might have been a few points scored for secondary Tac Ops... but I can't remember...

I'd like to try this again... but be a bit more sneaky about it... and use GREY KNIGHTS - the actual Daemon Hunters! Maybe I could convince Finnegan to do it!

Earlier today Orion was back and we played another game - and kicked off a CAMPAIGN of our own! Hopefully I'll get that report up a BIT sooner than these last two!

Kill Team - Daemons in the Woods