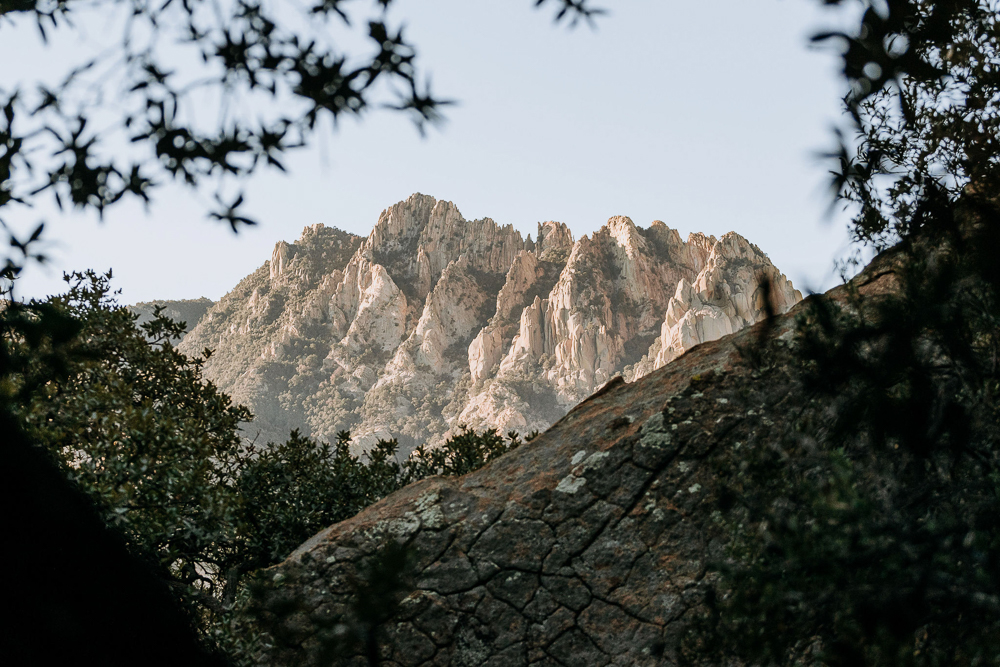 “Have you heard about the killer bees?” my climbing guide Jayci asked. We were scrambling over boulders that dotted a dry riverbed in Arizona’s Cochise Valley. “I have not,” I responded nervously, eyeing trunks of decayed oak trees and overhead branches, urgently scanning for a hive. We were hiking the approach to Four Course Meal, a popular climbing route deep in the Coronado National Forest. Apparently, I had more to worry about than my first multi-pitch.

A cross between South African and European honeybees, the killer bee origin story, as told by Jayci, begins in a Brazilian laboratory in 1957. After escaping the lab, the bees decided to get the hell out of dodge; some made their way north and settled in southern Arizona. This new kind of bee exhibits an anger management problem and is committed to chasing its agitator for up to a 1/4 mile. “They’ve killed people, cattle, and dogs,” Jayci continued, “Fortunately, this isn’t the season for them. Watch out for those agave spikes, though.”

Located in the Dragoon Mountains of southeastern Arizona, Cochise Stronghold is known for its impressive granite domes and spherical boulders (called “sky islands”) that rise from an expansive desert woodland. Yucca, agave, cacti, and fairy sword ferns grow here, while a wide variety of fauna calls the area home. You’ll be hard-pressed to miss the cows during your visit—the clang and tinkle of their bells echo throughout the valley all night long.

Touted as one of the best-known crags in Arizona, Cochise Stronghold lures rock climbers to its excellent cracks, classic lines set in the 1970s, and routes varying in difficulty (5.5 to 5.12). Tanya Bok, author of Cochise Stronghold Rock Climbing: Select Edition, notes that the area showcases many moderate, safe, mixed, and sport routes characterized by features such as knobby chicken heads and “pink granite domes speckled with chartreuse lichen.”

Climbing guides often exude a laid-back attitude of quiet confidence, and Arizona Climbing Guide Jayci was no exception. His weathered Arc’teryx backpack and Prana pants spoke of experience, later confirmed by tales of guiding trips in the Grand Canyon and atop Denali. He was easy to chat with and explained the importance of communication and how the camming devices worked. I was to release each one from its crevice, securing it to my harness as I ascended. 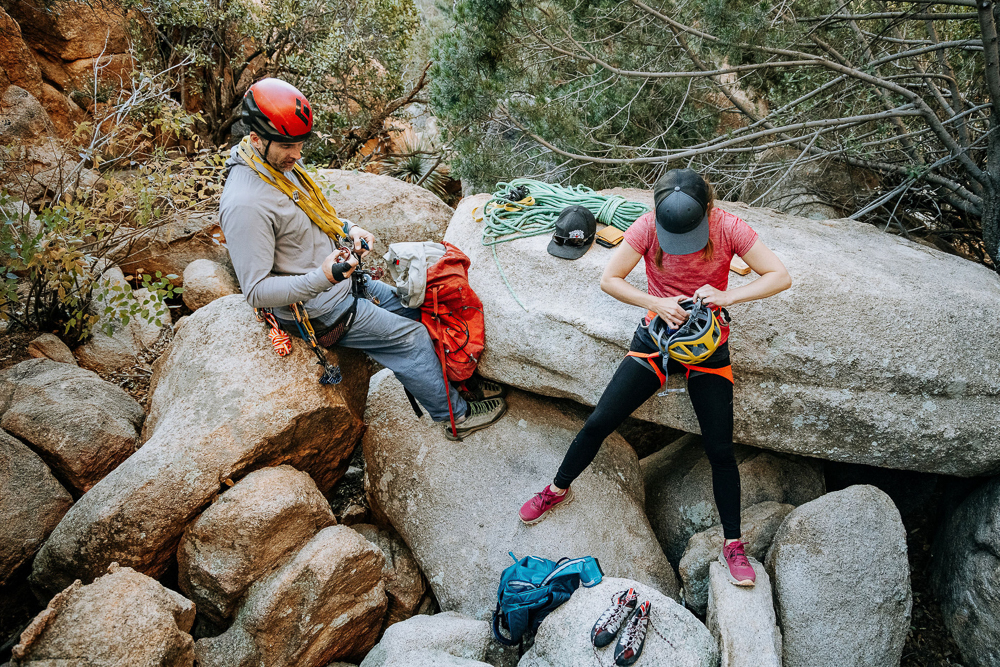 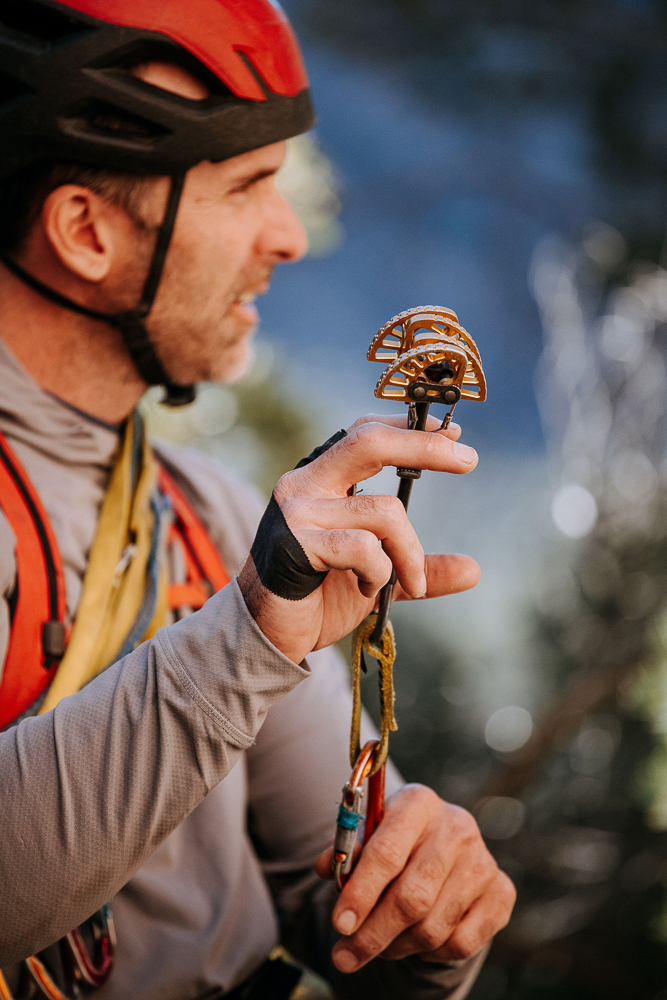 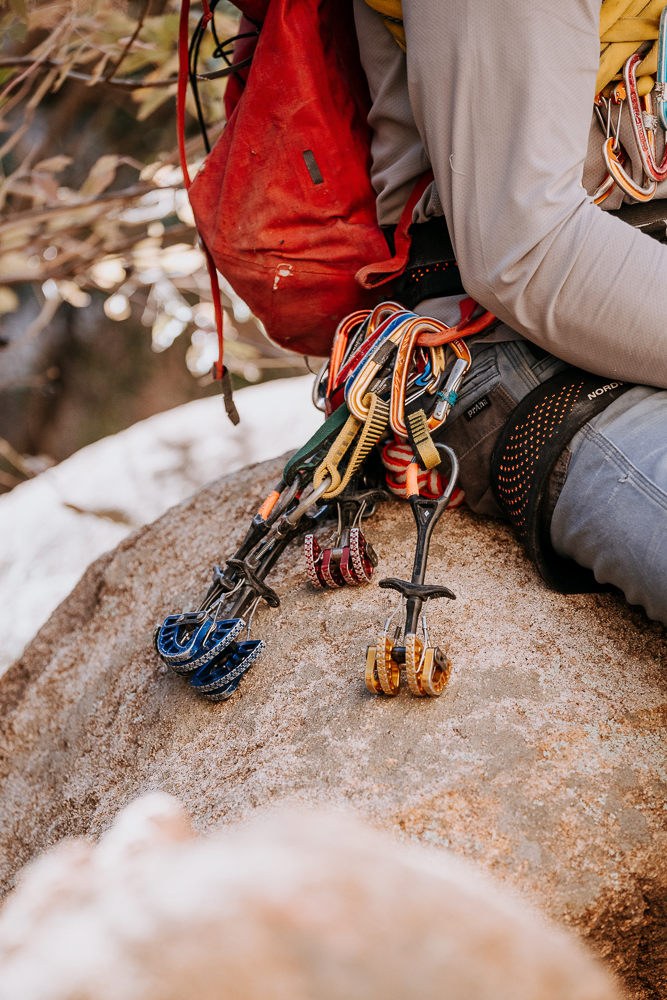 It had been some time since I climbed in the gym—let alone outside—so I wondered how things would go. Would softened fingertips limit my day? Would Elvis-esque leg shakes force me to quit too soon? Would the Trad gear hold? I hoped my fear of heights wouldn’t hijack my rational mind, leaving my limbs frozen like a scaredy-cat halfway up a tree, desperate for rescue.

Fear is hardwired into us and has certainly served us well in many ways; it’s complex and unique to the individual. More than mere emotion, we feel its effects physically: dilated pupils, decreased blood flow to our extremities and digestive organs, our hearts pound, and palms sweat. We fear predators, strangers, spiders, people’s opinions of us, the unknown, Mexico, the Middle East, fear itself—or, in my case, falling from a granite wall to my death. But that’s exactly why I was there. 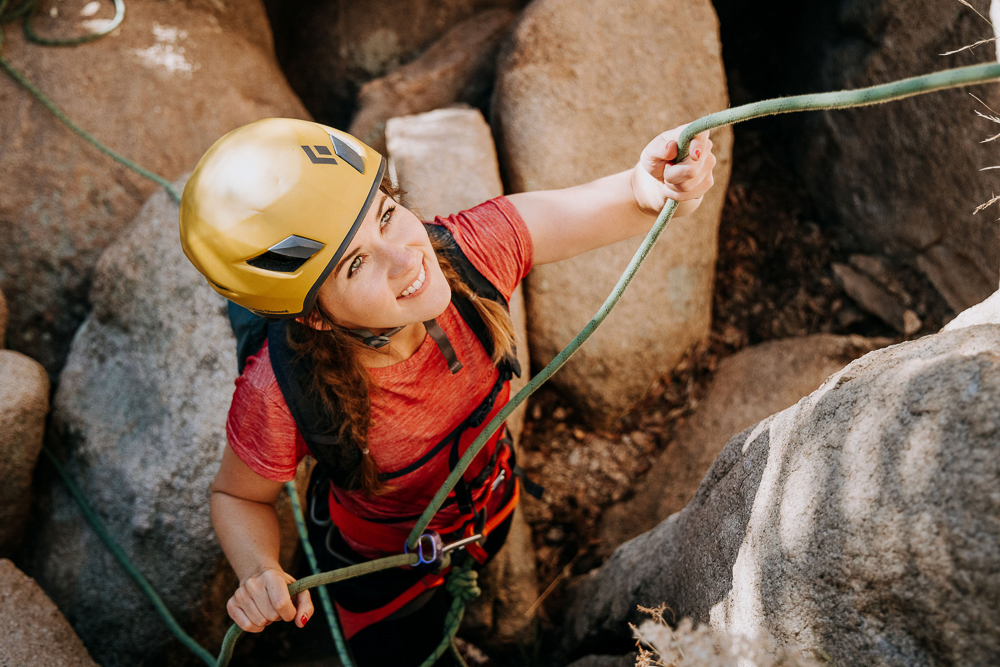 “I’m with you!” Jayci shouted words of encouragement as my fingers searched for a sliver, a ledge, or a groove on the rocky surface. My toe grip seemed untrustworthy, like it would reveal my secrets to others, releasing from my grasp and sending me into the air. When I asked Jayci later, as we scrambled by foot to the base of the crag, which advice he would give to newbie climbers, he highly recommended signing up for climbing courses or finding a mentor. This was a great reminder but standard advice, so when he started talking about his experience as a beginner, it piqued my interest. He told me he started slowly and was meticulously safe, repeating things countless times until he felt comfortable. We’re always in a rush to do the thing (Why can’t I be an expert beginner?!), so his tips served as a great reminder that when you’re doing something unfamiliar or new, why rush? Start with the easy climbs (or 4×4 trails, mountain bike rides, navigation calculations, adventure motorcycle tracks, etc.) and repeat them again and again until you feel ready to move on. It’s ok not to be the quickest in the class. Aren’t we ultimately here to have fun? 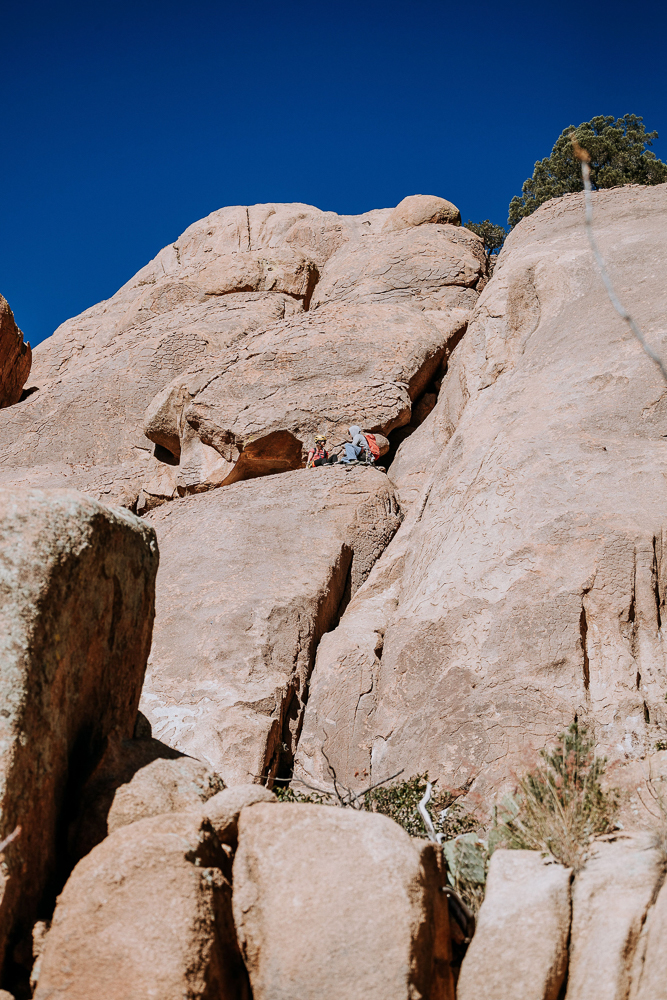 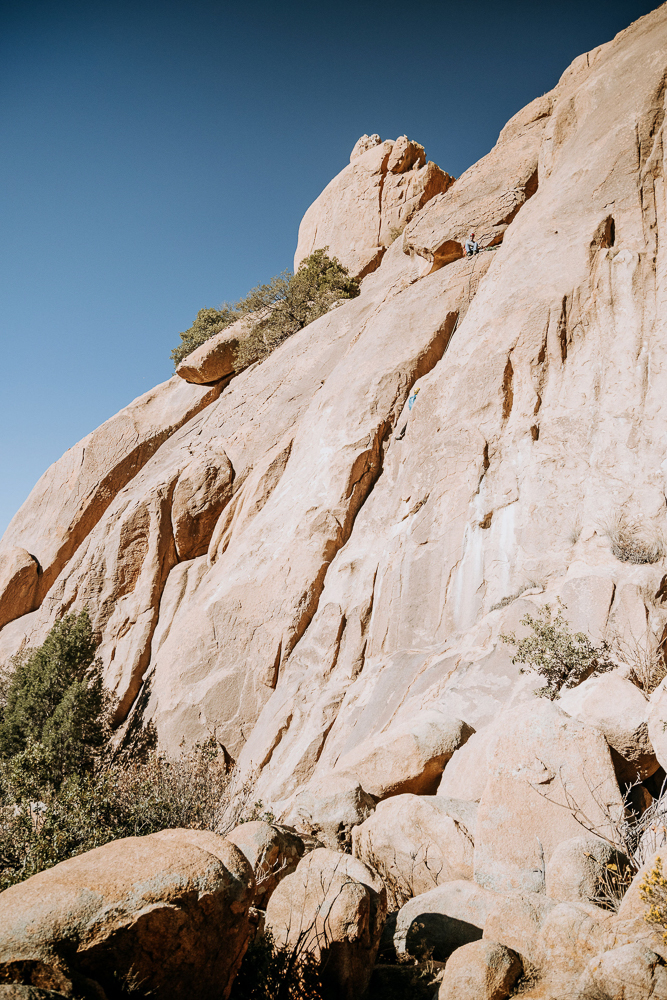 Fun. As my heart pounded in my chest, I tried not to look down past my feet to the tiny trees and rocks below. The morning sun warmed my arms. I took a deep breath. What have I gotten myself into? When difficulties arise, I often talk to myself and cuss like a sailor under my breath. Once, I accidentally found myself surrounded by moguls at the Lake Louise Ski Hill, yelling into my balaclava, “You’ve got this! You’ve got this!” as I tried not to break every bone in my body. Sometimes, fear works as an effective self-preservation technique (I lost a mere toenail because of that day). Back on the sticky rock at Cochise, I scooted up a crack, my feet inching up one side of the slab, while my backpack pressed into the rock at my back. Eventually, I did get it, and with the help of Jayci’s expertise, I arrived at the top of the fourth pitch. 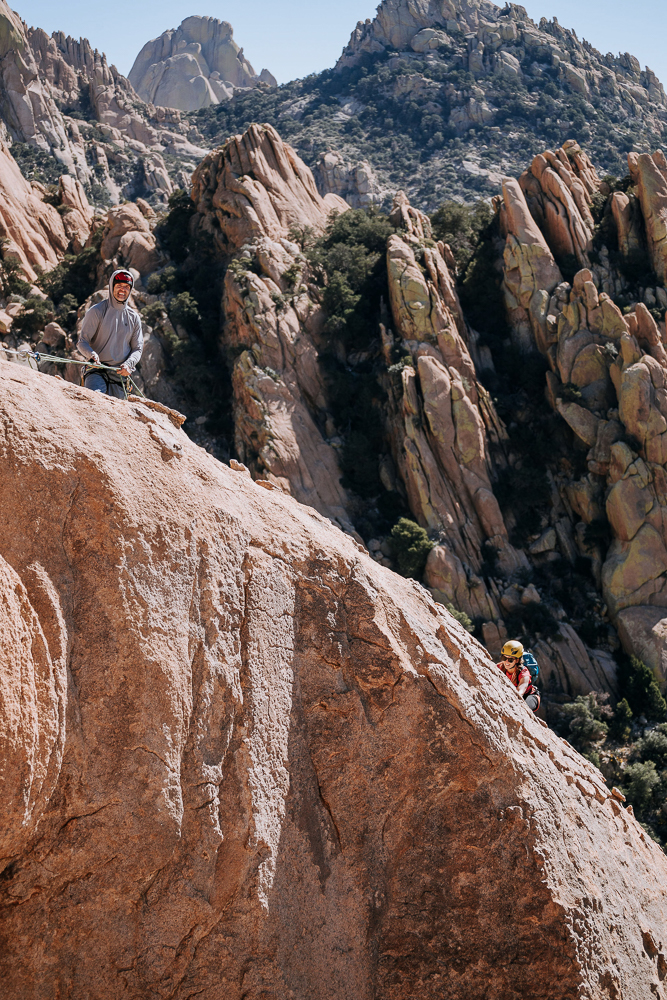 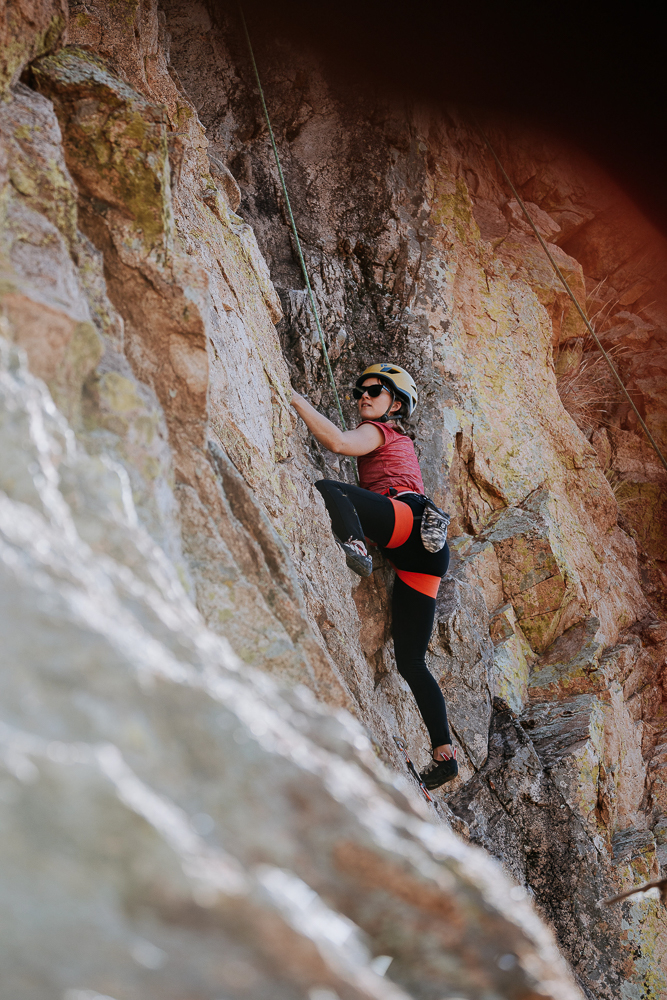 “Nice work!” Jayci offered his palm for a high-five. The valley was void of another soul, aside from several dive-bombing sparrows and a few geckos that had stared at me on my way up, probably wondering what the big deal was. What a view: a carpet of trees, jagged granite, and delicate-looking spires. Catching my breath, I pondered the power of fear. Like a trusted can of bear spray or motorcycle helmet, fear helps to protect. But it can also hold us back. To face what we’re afraid of often requires immense strength and bravery. In some cases, we soldier on and work through it alone. In other cases, it helps to join forces with an expert (or trusted someone) who can provide guidance and, occasionally, catch you if you fall. 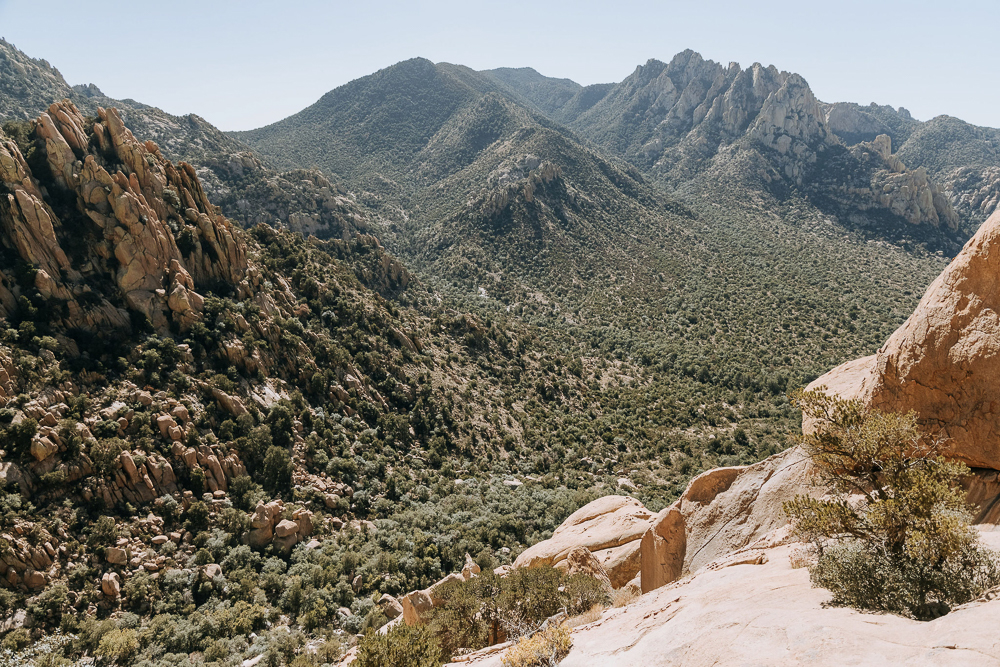 Editor’s note: This full day of customized climbing with certified Rock Guide Jayci Ferrimani was booked effortlessly with 57hours.com. 57Hours is a platform that connects people with certified guides for outdoor activities (hiking, backpacking, climbing, mountain biking, surfing, kiteboarding, etc.) in locations all over the world. Look for them in our upcoming gift guide. 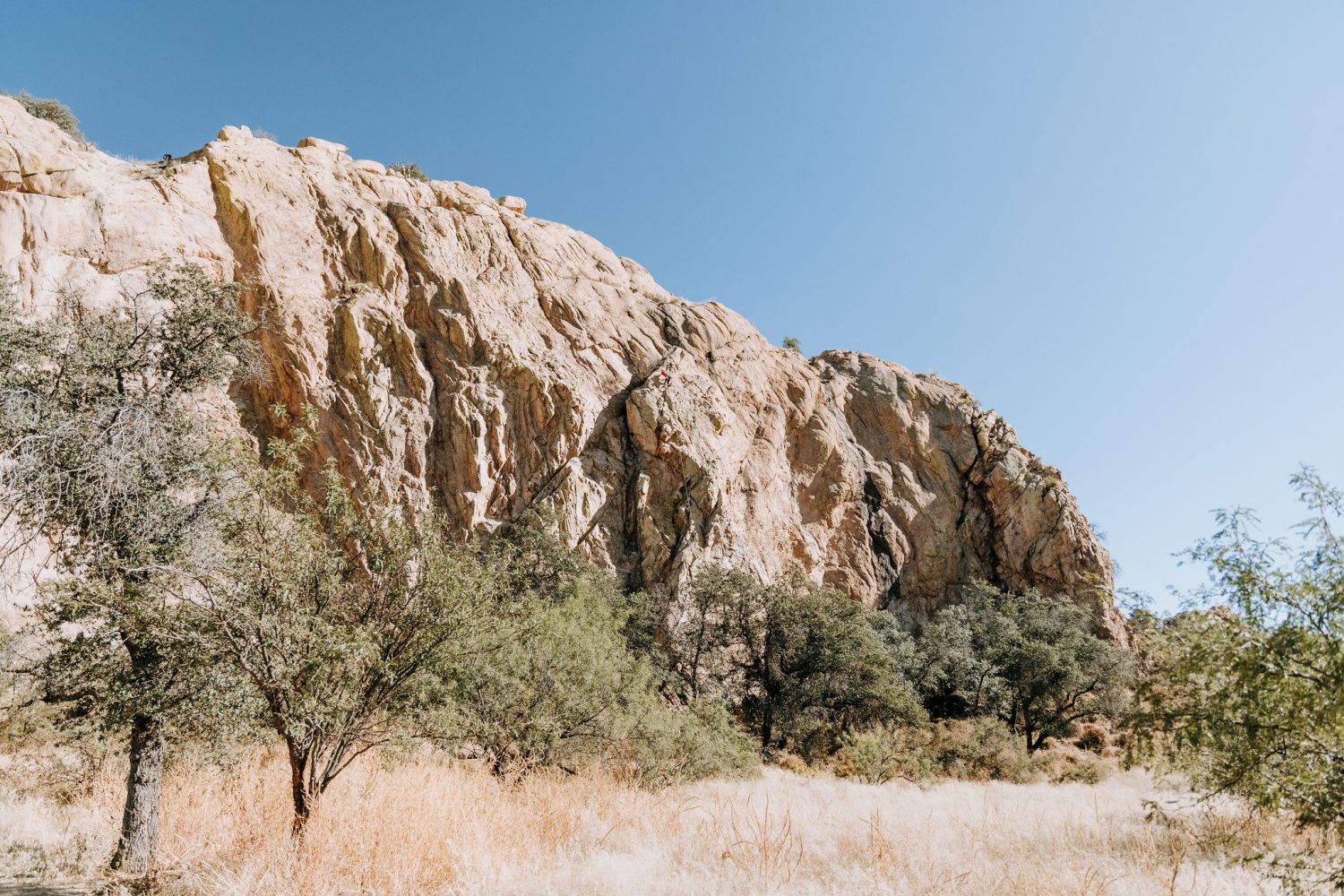 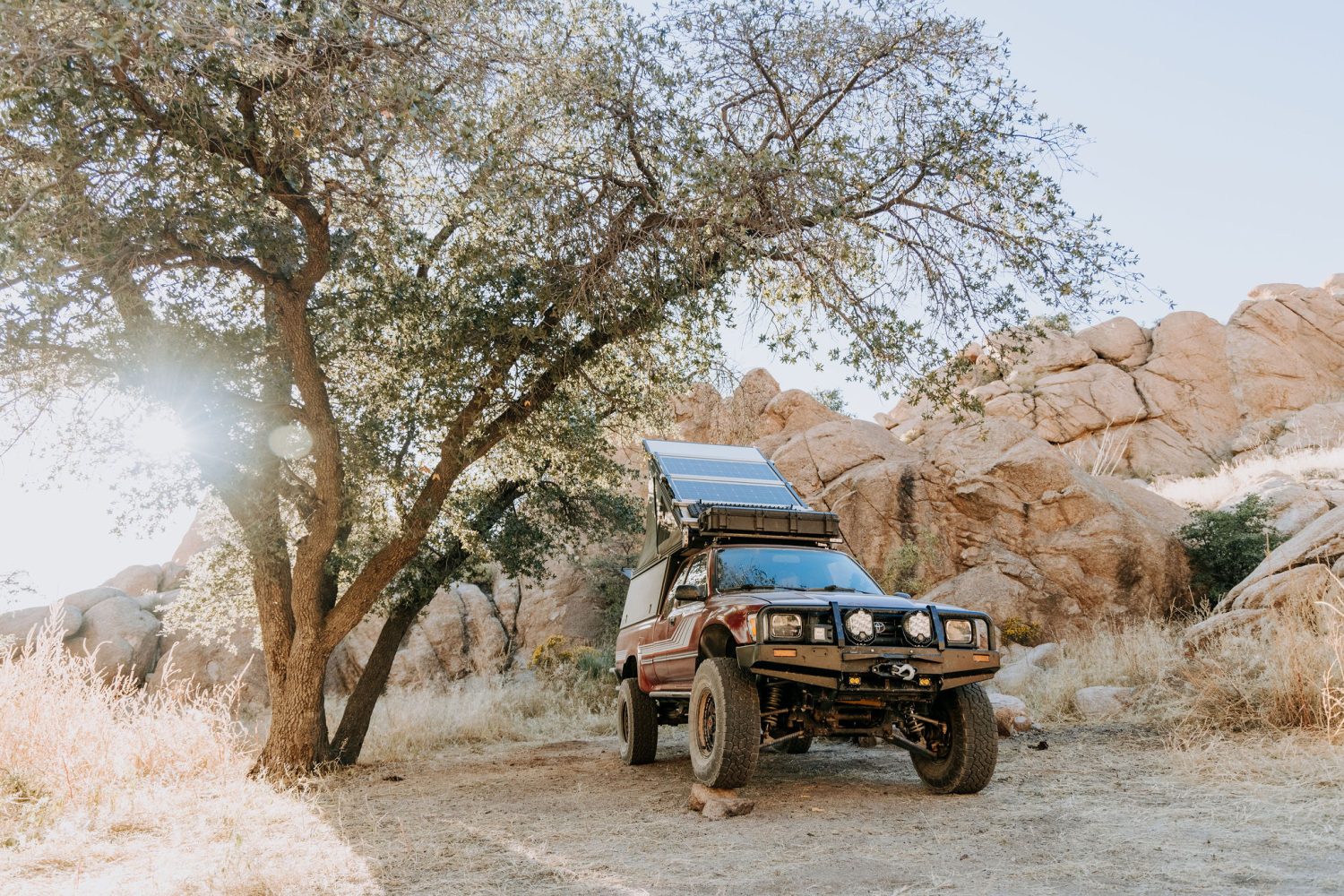