Apple, a company that is typically focused on manufacturing phones and computers, announced Tuesday that it wants to contribute its users’ data to a study of women’s health, saying that menstruation is as vital a metric as “blood pressure, temperature, pulse rate, and respiration rate.” This is likely to draw attention to the Health app, where the company is currently conspicuously promoting a “fertility awareness” app that was connected to a rash of accidental pregnancies in late 2018.

In the Reproductive Health tab of Health, a display of third-party apps at the top of the screen shows Natural Cycles, which bills itself as “a contraceptive app,” in the first spot. The app is essentially a way to digitize the fertility awareness method, a birth control practice that’s between 76-88 percent effective according to Planned Parenthood, a rate far lower than many other common birth control methods, and 93 percent effective with “typical use,” according to a study that Natural Cycles commissioned. 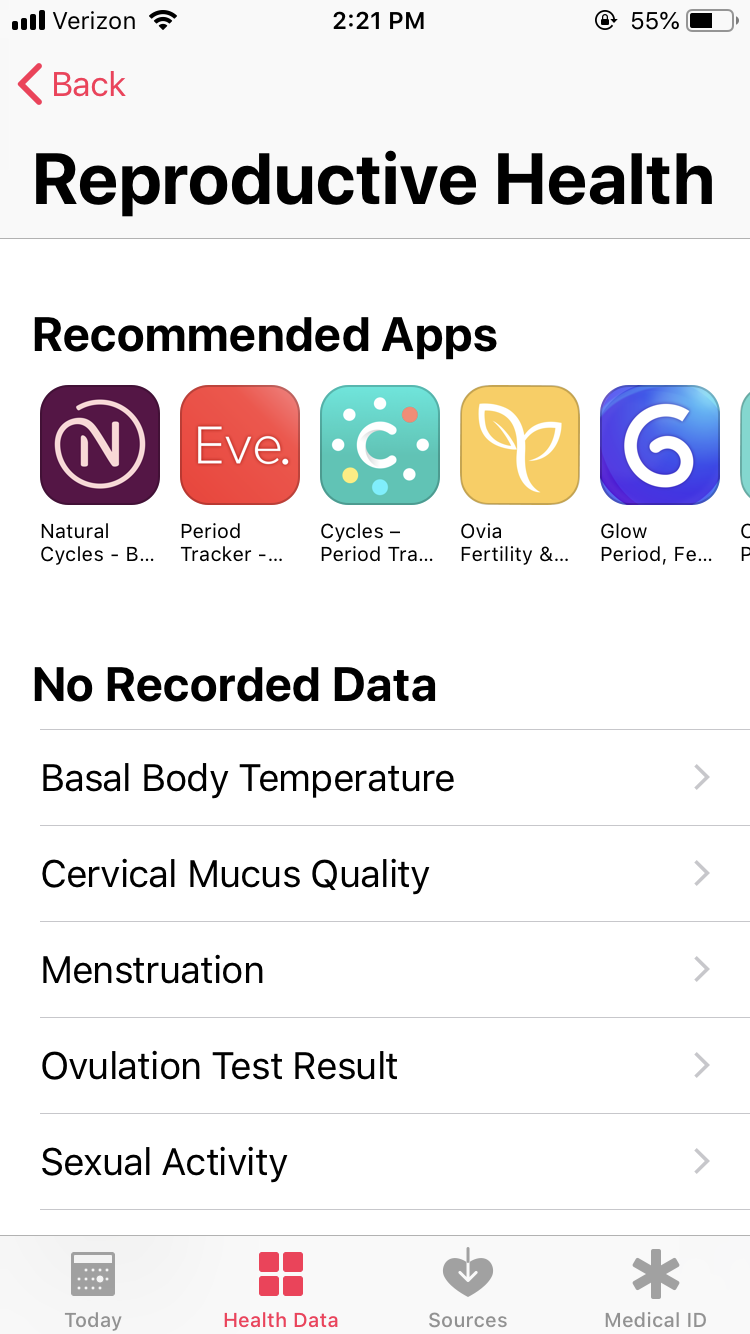 Apple gives prime placement to the Natural Cycles app, which

In August 2018, the FDA approved Natural Cycles as the first and (so far) only birth control app, but the approval came on the heels of stories describing how the app was behind scores of unintended pregnancies in Sweden. (An investigation ultimately concluded the failure rate was consistent with the app’s marketing materials, despite a rash of unintended pregnancies among Natural Cycle’s users.)

Apple’s choice to list Natural Cycles in such a primo spot isn’t governed by any sort of hard data, like download rate or rating. In an app store search for “period tracker,” Natural Cycles shows up several scrolls down, below more favorably reviewed apps like Flo, Clue, and Eve.

Apple’s promotion of Natural Cycles, which has been the subject of scrutiny for misleading Facebook ads that overstate its effectiveness and for leading to unintended pregnancy, seems like an extremely odd choice, given the company’s proud study announcement Tuesday. Later this year, a new app called Research will let Apple customers fork their health data over to Apple—plus researchers at Harvard’s T.H Chan School of Public Health and the National Institute of Health—to create a very big (and probably flawed) glob of data collected from Apple Watch users.

This is fine, if a bit dystopian, but pushing a birth control method on users seems… odd. If the company’s intent is to point people to apps just for period-tracking, there are other options that haven’t been charged with selling data without consent, already.

Apple didn’t immediately respond to questions about how it chooses its recommended reproductive health apps, but this post will be updated if and when they do.