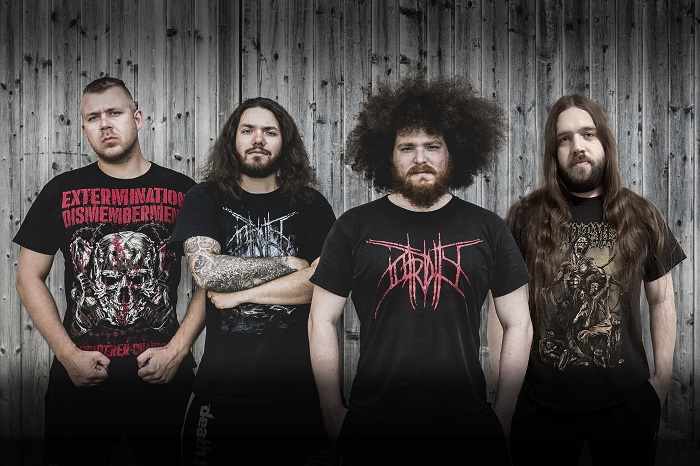 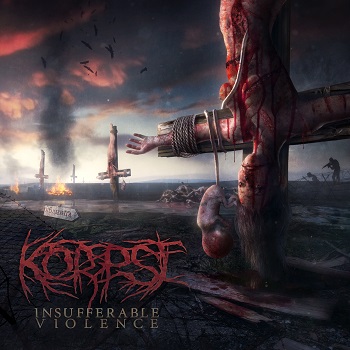 For those who don’t know anything about brutal Dutch bruisers Korpse, the cover of their third full-length Insufferable Violence provides an interesting commentary. See, nobody except weirdos and fun-hating scolds take brutal death metal seriously, at least thematically. If you didn’t get into horror in high school, you probably won’t get it – and that’s fine. For those of us who did, we’ll pass by album covers with all manner of atrocity on them, thinking nothing of it. It’s not so much about being desensitized to real violence and death, but just the fake stuff. Again, if you didn’t look at death metal lyrics and laugh yourself silly in high school, you probably won’t get it. As such, the inverted crucifixions of women with unborn babies dangling from umbilical cords is just another gratuitous brutal death metal cover for fans of the genre.

That is, until it isn’t. Korpse don’t traffic in fictional violence – they’re about holding up a mirror to the real thing. The scene on the cover apparently comes from the memory of a Dutch soldier who was the first to enter an Eastern European village after an ethnic cleansing. It’s not there to make us laugh or be edgy, it’s there to show us that reality can be significantly more cruel than any slasher, splatter, or exploitation flick. Insufferable Violence, like its two predecessors, uses brutal death metal’s blunt and uncompromising nature to tell of real-world horrors in a blunt and uncompromising manner. The Korpse sound is reminiscent of Kraanium, although with a bit less gravity blasting. It’s brutal, chug-filled, uncompromisingly heavy, yet still manages to sneak a bunch of hooks in without being too obvious.

While Cerebral Incubation uses samples to make us laugh, “PTSD” sees Korpse using a harrowing interview with a soldier and some clips from what sounds like a documentary to begin on a note of mental horror, an interesting and effective start to the record. From there, it’s Korpse business as usual: judicious use of blasting, tons of slams, and some nasty gutturals delivering what may or may not be words. They seem to be a bit more technical this time around, but you won’t be mistaking Korpse for Deeds of Flesh anytime soon. “Self-Preservation” varies and switches up its key riffs on a dime, but Korpse successfully makes it sound like a seamless whole instead of a disjointed mess, and the huge slam at the end after a second of silence is a nice touch. Also effective is the active and athletic drum performance. It’s busy and there’s a lot of blasting, but this makes the slower slams hit hard. “Vital Transaction” is the best example of this, teasing the listener with the huge ending riff popping up with more active drums but concluding the song with the band in total lockstep for some aural devastation. 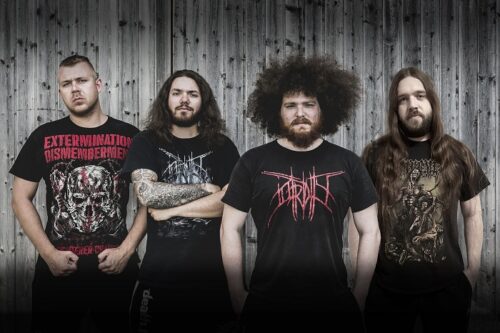 I don’t have many complaints. The verse riff in “Genocidal Bloodbath” sounds a bit too close to Iowa for my liking, but there’s enough thuggish slamming around it to make this a minor nuisance. Bookend instrumentals “PTSD” and “Epochs of Melancholy” gets the closest Korpse ever has to deathcore, reminding me of early Whitechapel (This is Exile) and Suicide Silence (No Time to Bleed) in their comparatively greater focus on melody. They also share a deathcore-tinged slamming riff in an effort at symmetry that has an average payoff. The songs are also all uniformly good and tend to follow similar structures and employ similar patterns. Korpse is talented enough to make this work, but it doesn’t help differentiate the songs. Concluding songs with the classic “play the same riff again, but slower, and maybe add a bass drop for good measure” is great fun, but when at least half of the songs do exactly that, they begin to blend together. This isn’t a fatal flaw, but it prevents Insufferable Violence from being a great record.