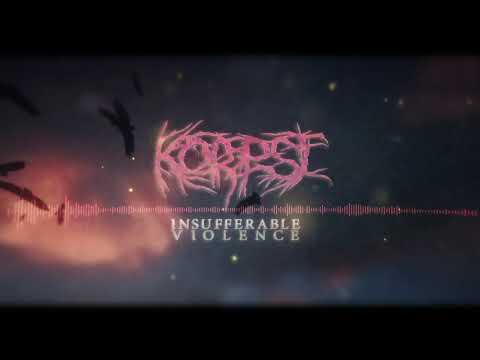 The Netherlands have quite a varying style of death metal genres and brutal slam death metal act Korpse were kind of a free-agent last year after releasing 2 prior albums.  Their 2013 self-titled debut and the sophomore Unethical in 2016.  Korpse had amassed, in their relatively short existence, quite a decent following and many of us speculated last year, when Unique Leader Records said they had a new signing, that Korpse was that band.  This proved to be correct and the label is a great fit for the band.  Unique Leader has the tech-death metal side covered with half their roster and the other half the brutal slam death metal type of bands.  The only new addition since their last recording is bassist Robin van Rijswijk.

Insufferable Violence is a short album – 8 songs in 28 minutes.  “PTSD” starts with a monster riff, right out of Ingested’s playbook – simply put this opening riff is bludgeoning.  This is the perfect live set opener.  There are some spoken word moments over the mid-paced heavy parts, taken from a movie or news clip one would assume.  Opening with an instrumental is something many deathcore and slam bands open an album with, thus this is no different.

The title track is next.  Rolling drums and then right into a monster blast beat with the drum triggers exploding chest cavities all over the place.  The blast beat actually carries on for quite some time before a double-pounding technique gets underway and then back into the blast beat.  Some really tight drumming and excellent guttural vocals, being vomited all over toilet seats worldwide.  Then the slam hits around the 1.50 mark and it’s murderous and then back into the blast beat.  More mid-paced rumbling heaviness then.  The title track is one of the fastest songs the band has ever released and yes look out for the vintage 90’s pinch harmonics ready to tear your head off.  “Disposable Underaged Objects” has plenty of blast beats and double-pounding moments going for it.  Some excellent start and stop stylized blitzing heaviness and then right into a nice slam with the undercarriage of heavy bass lines ready to suffocate entire neighborhoods.

“Callousness” at over 4 minutes is the longest song on the album.  Frightening blast beats and then right into the gutturals over the blast.  Super brutal stuff – not for the faint of heart.  If you just had your second Covid vaccine shot you may want to wait until a few days later before blasting this.  The 1.10 is the Holy Shit moment with the isolated guitar part that you guessed it – goes right into an 808 bass bomb drop slam moment that is sure to put you through the wood chipper in 0.5 seconds.  Awesome knuckle-dragging moment.

At the end of the day Korpse are not going to win awards for originality.  You will hear moments sounding familiar to labelmates Ingested, Katalepsy and Organectomy.  But when I am listening to brutal slam death metal I leave the originality meter at the door, just like I do with my brain when I watch horror movies.  Korpse are on this earth strictly to write vicious and angry brutal slam death metal.  I will say that this album does have a fair amount of blasting madness, so while the slams are still there, the band seems to have opted for a more brutal death metal sound.  This works well because when they shift into those slam moments they are much more impactful.  The album cover continues their violent trend and this one is no less severe than their prior albums.  The production is crisp and clean and guitars are excellently produced.