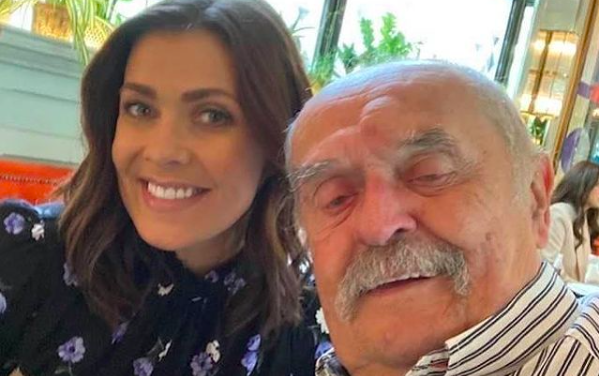 Kym Marsh’s father has been diagnosed with incurable prostate cancer after delaying a check-up due to the pandemic.

The former Coronation Street star shared that her dad Dave, 76, has been diagnosed with advanced prostate cancer, which has now spread to his pelvis, spine, ribs and left leg.

Dave, who had previously overcome prostate cancer, had been experiencing pains in his lower back and pelvis, but delayed going to the doctor as he didn’t want to be a burden on the NHS during the Covid-19 pandemic.

Kym, 45, told The Sun: ‘It has been a very difficult time, I can’t deny that, but we have always been very close as a family and so we have been able to talk together and plan for the future which is important.

‘At this stage doctors are talking about it being incurable, but it is treatable and the hope is that they may be able to extend his life — but by how much, nobody really knows, and he is in discomfort.’

Dave wanted his daughter to speak out about his illness to urge others not to delay check-ups or going to the doctor when something is wrong, as ‘the earlier you catch these things, the better chance you have’.

Covid lockdowns and pressure on hospitals have led to 50,000 fewer hospital referrals for treatment for prostate cancer in the UK.

Dave is in a lot of pain and has been forced to use a mobility scooter to get around, but is responding well to hormone treatment and is hoping a new treatment starting next week will give him ‘a bit longer’.

He said: ‘My biggest hope is the treatment keeps working and gives me more time with my family. I want to be fit and well enough to walk Kym down the aisle after she recently got engaged.’

Former Hear’say singer Kym got engaged to her partner Scott Ratcliff last week, after her boyfriend of three years proposed on her 45th birthday.

The exes are also parents to Archie, who died moments after he was born in February 2009.

Kym will speak about her father’s cancer diagnosis on BBC One’s Morning Live today, in an effort to encourage men to get possible symptoms checked out.

Prostate cancer is the most common cancer in men in the UK, with 40,000 cases diagnosed every year.

Do you know when vaginal bleeding could be a sign of cancer?

While the disease develops slowly, symptoms can include an increased need to urinate, straining while peeing and feeling that your bladder has not fully emptied, although these symptoms can also be caused by other conditions.

Treatment varies on the patient and is sometimes not necessary, but can include radiotherapy, hormone treatment and surgical removal of the prostate.

MORE : David Harbour gushes about how being a stepdad to Lily Allen’s kids changed his life: ‘I have a new love I never had’

MORE : Andrew Neil hits back at notion GB News ‘peddles hate’ as brands pull out: ‘Have a look at our content’