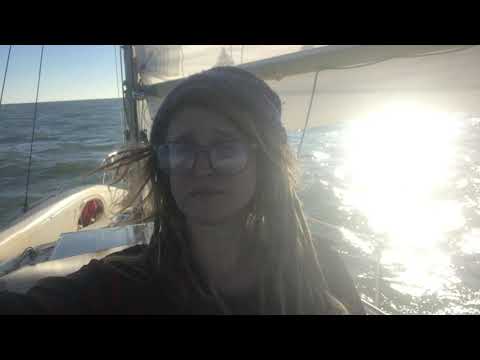 It’s 2 AM anchored near Posqoun flats where the York River and the Chesapeake Bay meet and I am most definitely seasick. The boat permeates a smell of gas. The human kind. There’s no gasoline on this boat. We ate canned black beans for dinner. My nemesis. I can handle them dried, soaked and cooked, but something about the cans. I’d nearly forgotten. My stomach cramps are reminding me.

I can’t sleep because of the rolling swells, slapping haylards, and items every which way in drawers and on deck clanging. And the gas. Sean’s on the floor farting in his sleep and I’m awake passing my own.

I’d do deep breathing to get closer to sleep but… you get the idea .

We originally set out for Mobjack Bay. But then decide to keep going. All the way to Hampton roads! We mused. We end up en route to a creek southeast of the York instead when the wind dies. It’s six more miles and we are going 1.5 knots, then half a knot, then we call it. Well, I call it because I’m tired and want to sleep.

Next time I’ll keep drifting. Sleep in shifts. We’re working on that .Shifts . Fairness of tasks. Both of us feeling slighted, often, by the other. The steepness of the waves on the Chesapeake all day and the fact that we are mostly remaining down below where it’s warm with the fire while sailing has resulted in this terrible feeling in my gut, but so it goes.

I decided I’m not aiming for the Atlantic in spring . It’s too far, and too long, with too much to do in a short period of time to get there. I didn’t get rid of my engine to go fast in life. So what’s the hurry there? I can’t deny that I’m disillusioned with the east coast sailing culture and fully intend to cross oceans on this boat, but the Atlantic will be there the year after.

The boat will be better dialed in by then and so will I. Sean and I will have had time to figure out the whole team work thing, too. For now I am pondering Nova Scotia and Cuba for 2020. And no more canned black beans on passages.