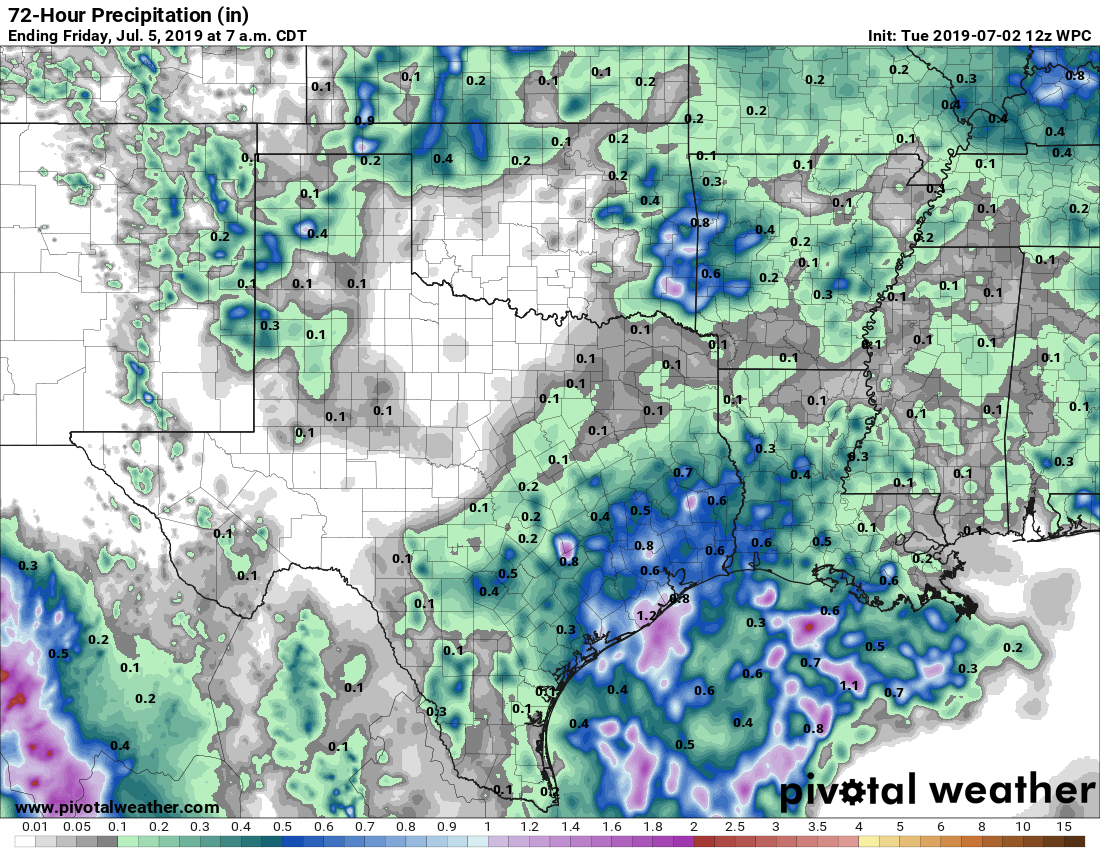 With a moist moist airmass moving inland on Tuesday and Wednesday of this week, we can expect elevated rain chances for a couple of days before high pressure settles in over the region. From July 4th through much of next week, Houston should see serene, hot, and sunny weather.

It’s a sultry morning, as one might expect during early July in Houston, with lows only in the upper 70s. The radar should remain fairly sedate until around 11am or noon, when the combination of daytime heating and those increased moisture levels start to produce fairly widespread, moderate-to-strong thunderstorms. Most of the area will probably see less than 1 inch of rain today, but there probably will be some bullseyes that receive 2 to 3 inches. Favored areas are probably south of Interstate 10, with perhaps the heaviest rain focused on Brazoria County. We’re always a little concerned about the potential with this kind of tropical moisture during the summer months, but as of now there don’t appear to be any forcings to really produce sustained, heavy rainfall that could lead to more than brief street flooding.

Storms should wind down from 6pm to 9pm with the loss of daytime heating. High temperatures today will either be in the upper 80s or low 90s, depending on the extent of rain for your area.

This should be a similar day to Tuesday, albeit with perhaps a bit less coverage. I’ll feel more confident in Wednesday’s forecast after we see what happens on Tuesday.

This should be a fine day for early July in Houston. We can’t rule out some isolated showers during the morning on the holiday, but otherwise skies should be mostly sunny, with high temperatures in the low 90s. By the time fireworks begin, temperatures should have fallen into the mid-80s, with partly cloudy skies. The only concerns will be humidity and mosquitoes.

Friday, Saturday, and Sunday all look to be essentially carbon copies of one another, with highs perhaps in the 92 to 95-degree range, and mostly sunny skies. Lows will be in the upper 70s. This will be classic summertime weather in Houston.

At this point, not much looks to change next week. We might see some very scattered showers along the sea breeze, but things looks fairly dry through about Thursday or Friday of next week, at least. After that, some change? Maybe. But sometimes high pressure systems get a hold of our weather in July and they’re hard to shake.