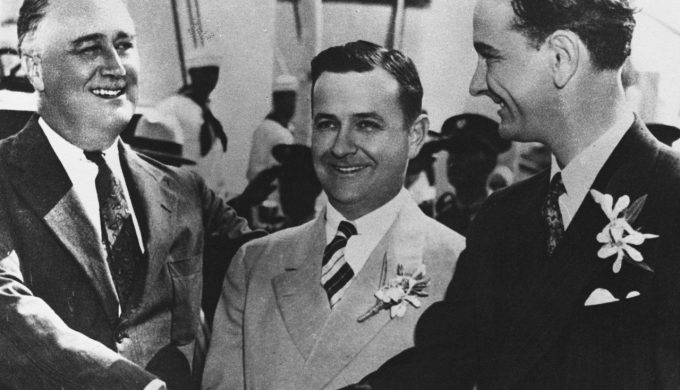 Lake LBJ and the Rebirth of Kingsland, Chapter 14: Kingsland’s #1 Neighbor

Note: We’re skipping a few chapters for now to get to the heart of the story sooner. We’ll fill in the blanks later! Read chapter one here.

Lyndon Baines Johnson had undoubtedly been to Kingsland before 1959. After all, he grew up just 25 miles away, and when he was first elected to the U.S. House of Representatives in 1937, Kingsland was part of his 10th Congressional district. Congressman Johnson won the affection of many Hill Country ranchers for his work to bring electricity to the rugged and sparsely-populated area, and he was very much involved with the workings of the LCRA. It would be a fair assumption to say that his influence helped speed the building of the Granite Shoals Dam, which turned the dying village of Kingsland into a lake town in the 1950s.

Photo: Lyndon Johnson was just a young Congressman when this photo, with President Franklin D. Roosevelt and Governor James Allred, was taken in Galveston in 1937. He had already made up his mind to be president before the age of 60, and that dream provided the motivation that made him one of the most effective legislators ever; Kingsland benefited tremendously from his success.

It was in 1959 that then-Senator Johnson (he became the Senate Majority Leader in 1954) became a local property owner. A front-page article in The Llano News on May 14 was headlined, “LBJ buys lake lots.” It reported that Senator Johnson had sent agents to scout out the area for the past year, and that he and his wife had visited Kingsland the previous week, when they settled on a tract with 500 feet of waterfront in the new Kingsland Estates subdivision. While the Johnsons had no public comment, rumors spread that they planned to build a vacation home for themselves and a couple of guest cottages.

Photo: Lyndon Johnson was just a young Congressman when this photo, with President Franklin D. Roosevelt and Governor James Allred, was taken in Galveston in 1937. He had already made up his mind to be president before the age of 60, and that dream provided the motivation that made him one of the most effective legislators ever; Kingsland benefited tremendously from his success.

In March of 1961, while on a tour of the area, the Johnsons and Judge A.W. Moursund became the first riders on a ferry across the Llano River Arm of Granite Shoals Lake. By then, Johnson was Vice-President. In partnership with Judge Moursund, he purchased the 5,640-acre Haywood Ranch in June, on the other end of the ferry ride. From then on, he and his family were frequent visitors to the Kingsland area, and were often seen boating on the lake.

In 1962, the vice-president made news when his boat ran out of gas, and he had to be towed to shore. Another time, he and the president of Pakistan had stopped to switch gas tanks when they were accosted by a local youth wondering whether they needed help. The young man was shocked to find out who they were, but was treated very kindly by the two VIPs.

Photo:  One of President Johnson’s favorite practical jokes was to fake a brake malfunction and drive unsuspecting guests into Lake LBJ in his prized floating Amphicar.

When Lyndon Johnson became President after President Kennedy’s assassination, security got a little tighter. He was generally accompanied in his boat rides by four smaller boats manned by Secret Service agents, who sometimes were quite brusque with locals who came too close. He maintained acquaintance with several locals, and caused great excitement whenever he came to town. In January of 1965, the Kingsland Chamber of Commerce voted unanimously to change the name of the lake from Granite Shoals to Lyndon Johnson. Members drafted a resolution and sent copies to the LCRA and to President Johnson. The LCRA was only too happy to comply, and the name was officially changed later that year.

Photo: President Johnson enjoyed spending time on the lake in his yellow Glastron boat, and every Kingsland old-timer has at least one story of an LBJ sighting.

In the meantime, numerous improvements were made to Kingsland’s highways and bridges during the Johnson years. Although there is no official record of President Johnson using his influence to help things along, old-timers credit him with much of the progress that was made; it is said that Kingsland was the first town in Texas to have two four-lane Farm-to-Market roads, and new bridges were built across both arms of the lake while LBJ was president. For that reason, in addition to the prestige of his high office, he was a local hero. When he left office in 1969, he stopped in at the Highland Lakes National Bank to shake hands with all the employees; “We didn’t want to wash our hands for days,” reported cashier Mildred Bizzell. When preparations were being made to turn President Johnson’s Stonewall ranch into a national park, he recruited bank president Woody McCasland to be the treasurer for the project.

President Johnson remained a celebrity in Kingsland (and elsewhere, of course) even after he left office; when his ranch containing the “Texas White House” was opened to the public in 1970, it made front-page news in Llano County, and dozens of Kingsland residents attended the park dedication. The following month, LBJ was given an honorary membership in Kingsland’s new Highland Lakes Recreation Association (now Lighthouse Country Club). When Lady Bird Johnson published her “White House Diary” in December that year, Kingslanders flocked to the autograph party in Fredericksburg, where (according to the front-page story in The Llano News) President Johnson mingled with the crowds and visited with old acquaintances all afternoon.

Lyndon Baines Johnson is a legendary figure all around the country (and probably around the world!), but in Kingsland he was especially appreciated as an effective leader who took care of his constituents, and as a good neighbor to the little lake town. When he died in 1973, Kingsland’s Aqua Boom boat parade was led by a passengerless boat to honor his memory. His presence here adds another interesting wrinkle to Kingsland’s rich history, and his name remains on the lake that gave Kingsland its rebirth.

Lake LBJ and the Rebirth of Kingsland, Chapter 14: Kingsland’s #1 Neighbor