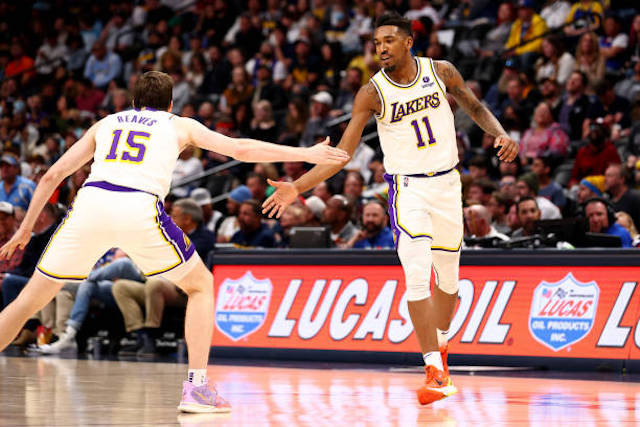 After an unsatisfying 2021-22 season for the Los Angeles Lakers, the small moments of electricity were powered by some of the youngest members of the Purple and Gold – Austin Reaves and Malik Monk.

The dynamic backcourt features two players who unite in a special history together 1,674 miles away from Los Angeles. Reaves and Monk both grew up in the state of Arkansas, where they share common high school basketball experiences by playing against each other in both AAU and organized high school ball.

In an article by The Athletic’s Jovan Buha, the importance of having someone relatable on the team was expressed by Monk when asked about how he felt about the childhood roots both he and Reaves share:

Playing a professional sport is not always sunshine and rainbows for athletes. For Monk to have someone he can connect with in a unique way benefits his overall comfort and chemistry within the team.

The brotherhood between Reaves and Monk also brings out a veteran-to-rookie relationship. Now that the Oklahoma graduate’s rookie season is over, he detailed how Monk was a leader in the midst of the Reaves’ basketball trials:

“He helped me through DNPs a couple of times, just telling me to keep my head down, work and do the little things that’ll get me on the court,” Reaves added. “I owe him a lot for that.”

Monk was a consistent scoring threat that tallied 13.8 points on 39 percent shooting from 3-point range for the Lakers last season. With the 24-year-old heading into free agency, the question of whether or not Monk will re-sign with L.A. looms amongst fans.

The significance he holds on the Lakers goes beyond the stat and win column, but it extends to his long-time relationship with Reaves. Like the Laker faithful, Reaves is in agreement that he wants Monk back in the same uniform again next season:

No matter where Monk winds up in free agency this summer, the bond that he and Reaves share connecting all the way back to being kids in Arkansas will remain a lifetime.

Laker fans need to keep their fingers crossed to not only keep a fantastic young player in Monk but also to keep the chemistry between him and Reaves alive, which will translate to the basketball court.

Another guard the Lakers were expected to have interest in is John Wall after he got bought out by the Houston Rockets. While it looks like Wall will be coming to L.A., it won’t be to play for the Lakers as the expectation is he will land with the Clippers.