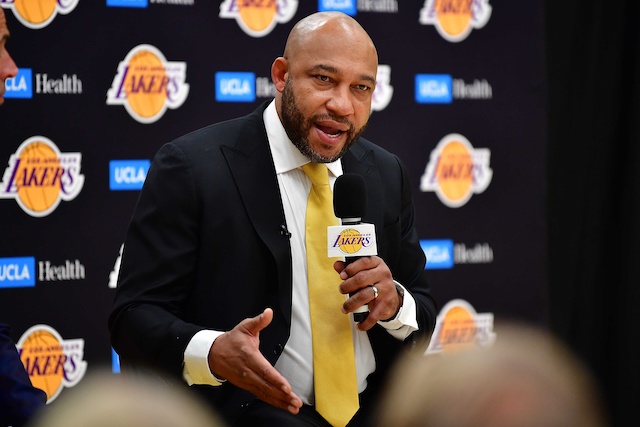 Even though all the focus is going to be on free agency, teams are also gearing up for Summer League which takes place in less than a week.

The Los Angeles Lakers will be showcasing their new group of rookies and undrafted free agent at the California Classic in San Francisco this weekend before heading to Las Vegas for the NBA 2K23 Summer League. The Lakers have an intriguing roster headlined by Max Christie, but also two-way contract players Scotty Pippen Jr. and Cole Swider.

Head coach Darvin Ham led the Summer League roster’s first practice earlier this week and came away happy with the competitive tone set by the players, via Spectrum SportsNet:

“It’s been great being able to implement some of the things we’re going to do on both sides of the ball defensively, offensively. And also just creating the energy and setting a tone, a competitive tone for us to go out there and compete. It starts now. Obviously, it’s not our real team that’s gonna come in the fall but still these guys are fighting for a position, these guys are fighting for an opportunity and it’s great. Feeling their energy and competitiveness throughout the workout was amazing.

The Summer League roster is a good chance for Ham to execute his on-court vision and philosophy for the Lakers and it sounds like the first practice went exactly how he wanted. At his introductory presser, Ham emphasized he was going to get the team to compete on a nightly basis, and it seems things are already starting to take shape.

It will be fun to see how the youngsters compete in their first taste of professional competition, and their style of play will be a good indicator for how the Lakers look for the 2022-23 season.

All eyes will be on Christie as Los Angeles traded into the top of the second round to select him. After the team’s first practice, Ham had nothing but good things to say about the rookie:

“He’s a very multi-faceted ball player. Max had a great day today, dribbling the ball, passing the ball, playing defense. I think he won every sprint. He’s gonna be a really, really good player. He has a tremendous upside, has the body for the game. Long, wiry, athletic with great touch and great decision-making skills even at this stage of his career. We’re excited about him.”

Christie was underwhelming in his lone season at Michigan State, but he will have a chance to prove in the Summer League why the Lakers are so high on him and his future.