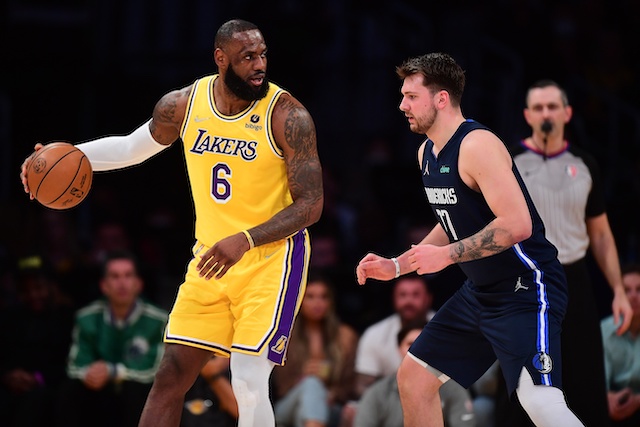 With the Los Angeles Lakers missing the postseason despite having championship aspirations, LeBron James has had some extra time on his hands.

To no surprise, James has been locked into the playoffs, which have been entertaining so far with the Golden State Warriors, Dallas Mavericks, Boston Celtics and Miami Heat advancing to the Conference Finals.

James also recently teased that he was planning to do a Q&A with fans, and he finally followed through with that on Monday night, answering a variety of different questions on Twitter.

One of the questions that James was asked was who his favorite young player in the NBA is, and he did not hesitate to say Luka Doncic of the Mavericks:

This does not come as a huge surprise as James said earlier this year after the Lakers played the Mavericks that Doncic is the one player in the league who reminds him of himself.

Doncic has been a star since he stepped into the league, but this postseason has really been his coming out party as one of the best players in the NBA period at the young age of 23.

After his teammates did most of the work to beat the Utah Jazz in the first round while Doncic was out with a calf injury, he picked up the slack in the second round to help defeat the top-seeded Phoenix Suns in seven games. That series ended with an absolute thrashing in Game 7 in Phoenix in which Doncic and the Suns both scored 27 points apiece in the first half.

The way Doncic has been able to lead a franchise to greatness this quickly is very reminiscent of a young James and what he did with the Cleveland Cavaliers. It remains to be seen if it will end in a championship this season, but that doesn’t change what he has already accomplished in the NBA in his short time with the Mavericks.

LeBron in good place with Jeanie Buss and Lakers organization

In addition to doing Q&As with fans, James’ focus this offseason has to be on figuring out how to get the Lakers back into championship contention next season.

While that is a tough task, it is good to see that James is reportedly in a good place with Jeanie Buss and the Lakers organization, which will be necessary for the organization to return to greatness.