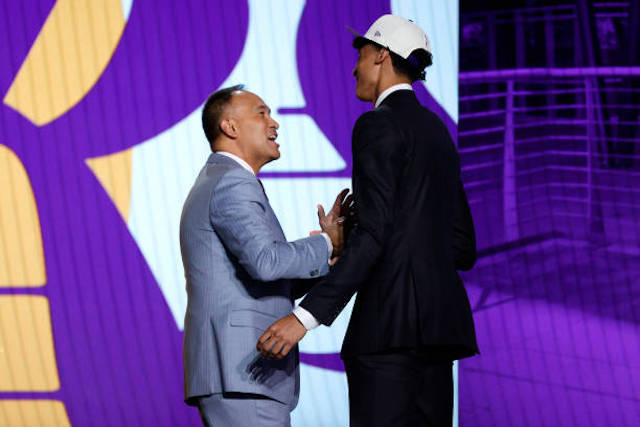 Draft day is one of the more fulfilling moments for an athlete. All the long workouts pay off once the commissioner calls your name, setting off an avalanche of emotions. When that moment came for Los Angeles Lakers guard Max Christie, it wasn’t any different from your typical draft day reaction.

The Lakers selected the Michigan State guard with the No. 35 pick in the 2022 NBA Draft after acquiring it from the Orlando Magic. Christie’s lone season with the Spartans started strong but fizzled out as the months went on. He finished the season averaging 9.3 points, 3.5 rebounds and 1.5 assists while shooting 31.7% from three.

Christie is seen as more of a long-term project than an instant contributor. The 6-foot-6 guard’s decision to enter the Draft seemed premature — scouts believed another year in college would have benefited Christie in gaining muscle and fine-tuning his jumper.

But, the Lakers clearly liked him enough to take him in the second round. General manager Rob Pelinka said Christie was a unanimous choice.

When Christie finally heard his name called, there weren’t many words to explain the moment.

“There was a lot of emotions. And it’s really hard to describe because there was just a lot going on at that moment,” he said. “And, you know, sort of my dream came true. It was really cool to experience hearing my name called and become a professional for real.”

Becoming a professional is an immense accomplishment in itself. But, teaming up with players such as LeBron James, Anthony Davis and Russell Westbrook left Christie “living the dream.”

He didn’t expect this to come to fruition, however.

While the Lakers hosted numerous players for workouts, Christie never made the trip to El Segundo for a workout. The only communication between the Lakers and Christie took place at the NBA Combine in Chicago.

“That was definitely the extent just the interview that we had was the most communication face to face that we had,” he said. “So a little bit of a surprise.”

Sometimes surprises evolve into no-brainers. Over time, Christie’s tenure with the Lakers might turn into the right move.

Moments after an NBA legend’s son joined the Lakers Summer League team, another one did the same. The Lakers signed undrafted Scotty Pippen Jr. to a two-way deal.

The son of the six-time NBA Champion, Pippen Jr. averaged 20.4 points per game last season at Vanderbilt, leading the SEC. He was also a two-time First Team All-SEC selection. Adding Pippen as a two-way player gives him time to develop with the Lakers developmental team and the chance to play some big league minutes.

The Lakers also recently hired Atlanta Hawks assistant coach Chris Jent to join Darvin Ham’s staff. Jent has a strong history of developing players and can be the main cause of improvement from Pippen Jr. or Christie.