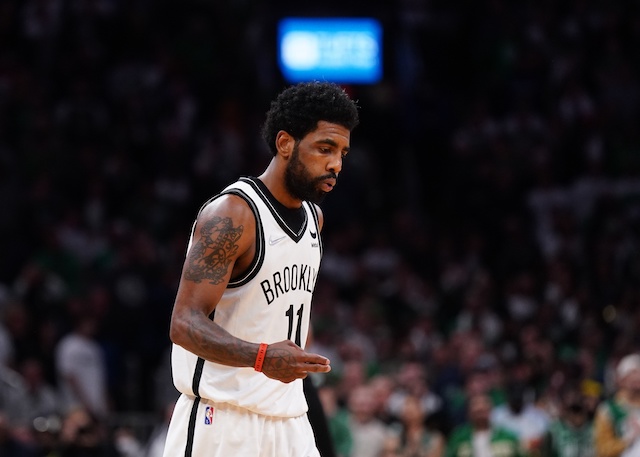 The biggest ongoing story throughout the entire NBA continues to be the saga between the Brooklyn Nets and their superstar duo of Kevin Durant and Kyrie Irving. Once it was reported that Durant requested a trade away from the organization, it seemed like a foregone conclusion that the Irving to the Los Angeles Lakers rumors would kick back up as well.

The Lakers’ interest in Irving makes sense as he would be a much better basketball fit next to LeBron James and Anthony Davis than Russell Westbrook has shown himself to be. It looked as if the two sides were close to figuring out a deal, but now it seems that isn’t the case.

According to ESPN’s Adrian Wojnarowski, the Lakers have yet to aggressively pursue a deal for Irving:

“Similar to Durant, I think it’s a very slow-moving market right now. I think certainly unlike Kevin Durant, I think there is a limited number of teams where it might make sense. I do think there are teams that would like to do deals for him. It’s different from the sign-and-trade he tried to get. That’s where teams would have had to sign him for multiple years. He’s essentially on an expiring contract, and I think that teams that just need to improve their talent, they can take some risks with Kyrie Irving.

“The Lakers have yet, I’m told, to be aggressive in trying to put a deal together to get [Kyrie] from Brooklyn. That may come, that may evolve with time, but so far right now, there’s no traction really on deals with either Irving or Kevin Durant. They’ll develop over time, but listen both of these processes could play out, and they don’t have to trade either. They’re both under contract. They could bring them back to start the season. I don’t think that’s the ideal scenario for Brooklyn. I think it’s ‘try to find get the biggest haul of assets they can.’ But again, there’s a lot of time left in this off-season and a lot more talks that are coming.”

The issue for the Nets is that teams know they want to deal their stars and as such, likely won’t offer as much thinking Brooklyn is desperate. By all accounts, the Lakers are the only team really interested in bringing in Irving and both sides are trying to get the deal that benefits them most.

With both Irving and Durant under contract, Wojnarowski is right in that the Nets could simply hold on to them instead of accepting bad deals during the offseason. The Lakers may not have been aggressive yet, but that could change in an instant, especially as the season gets closer.

LeBron James wants Kyrie Irving on the Lakers ‘more than anyone’

If LJames has his way apparently, Irving will wind up in a Lakers uniform before next season begins. The two thrived together in Cleveland, winning a championship in 2016 and LeBron surely believes they can reach that plateau again.

Reports suggest that LeBron wants Irving with the Lakers more than anyone and though it hasn’t happened yet, those rumors won’t be dying down anytime soon.