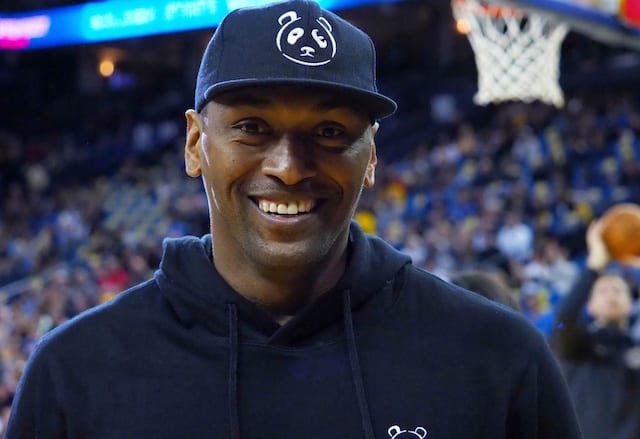 As part of Mental Health Awareness Day, the Los Angeles Lakers recently spotlighted one of their most vocal, and maybe misunderstood former players to speak to fans at the Crypto.com Arena. Metta Sandiford-Artest, aka Metta World Peace, aka Ron Artest, took center court and shared his experiences struggling with mental health while in the league and how the NBA has progressed since.

Sandiford-Artest spent five of his last six years in the NBA with the Lakers, during which time he helped the Purple and Gold win their 2010 championship. He faced controversy from media and fans multiple times in his career and knows firsthand the pressure athletes face.

It took a lot of courage, but he stood in front of a sold-out crowd and spoke about his experiences with mental health:

Through his 19 years in the league, Sandiford-Artest was painted as eccentric, wild and uncontrollable, all of which culminated in the 2004 incident most NBA fans know as the “Malice at the Palace.” In 2010, he began advocating for mental health awareness, a movement that the league has championed in recent years.

Since 2018, he shared, he has been working with UCLA Health, who partnered with the Lakers in 2016, to provide mental health support for players and their families. He spoke about the leaps the NBA has made to make the mental health of players a priority, when just 10 years ago, such topics were considered separate from sports altogether.

The NBA has made conscious efforts in the past few years to become the lead professional sports league on mental health. More notably though, the players themselves have become way open talking about their own mental health struggles. Kevin Love published his eye-opening Player’s Tribune article, where he wrote about a panic attack he had in the middle of a game.

Sandiford-Artest made sure to acknowledge the transformation the league has gone through and assured fans his work is just getting started.

During a rough season for Lakers fans, Malik Monk was often the lone glimmer of hope to watch on the court. After outperforming his first-year expectations with the Lakers, Monk is likely to receive large contract offers this summer.

Monk is likely to receive offers around $5-10 million, which could exceed the $6.3 million the Lakers have set aside for remaining contracts.