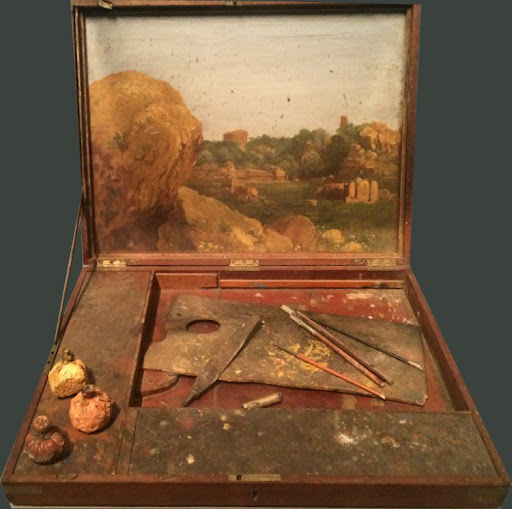 View in browser
Of the Hudson River School painters, Thomas Cole (1801-1848) was the first.  Although he lived a short life, he inspired many of the Hudson River painters who followed him, including his protégé, Frederic Church.  Born in England, at age 17 he settled with his family in Ohio, later moving to Pennsylvania and, finally, to Catskill, New York.  Working first as an engraver, he moved on to portraiture but soon discovered his main love, the natural landscape.  Landscapes took off for him as a marketable art when a patron financed a trip for him to the Hudson Valley, where he gathered reference material and returned to the studio to paint Kaaterskill Falls and other sublime  subjects.  Two of the paintings ended up in an 1826 exhibition – Cole was only 25 at the time – and caught the attention of some better-known painters, like John Trumbull, painter of The Declaration of Independence, who helped him rise in stature. In his later years, Cole spend a good deal of time in Europe, sketching Italian and Greek landscapes and ancient ruins.
In 1831, while in Florence, Cole began to sketch in oil en plein air, a way of gathering reference material that he apparently learned from another painter.  This was before the invention of the paint tube (1841.)  In Cole's day, painting with oil in the field meant carrying the paint in pig's bladders—a messy proposition at best. You can see these in the photo above.  I don't know if he ever made the move to paint tubes.
In his essay, “American Scenery,” he first notes the abundant beauty that the natural landscape gives us and then mourns how a rapidly-industrializing America is heading the way of Europe in tearing up the countryside.  He laments that the country will not change from this path:

This is a regret rather than a complaint; such is the road society has to travel; it may lead to refinement in the end, but the traveller who sees the place of rest close at hand dislikes the road that has so many unnecessary windings.

Yet finally, he waxes with guarded optimism:

I will now conclude, in the hope that, though feebly urged, the importance of cultivating a taste for scenery will not be forgotten. Nature has spread for us a rich and delightful banquet. Shall we turn from it? We are still in Eden; the wall that shuts us out of the garden is our own ignorance and folly. … May we at times turn from the ordinary pursuits of life to the pure enjoyment of rural nature; which is in the soul like a fountain of cool waters to the way-worn traveller.

Cole embodies his generally pessmistic outlook in  his wonderfully imaginative series, The Course of Empire.  I have always loved these five paintings, which describe the history of an imaginary city as it rises out of wildness to the peak of civilization, only to descend into a desolate landscape, empty of Man save for a few marble columns.  (I am reminded of Shelley's poem, “Ozymandias.”)  As a reader of fantasy and science fiction, I find a kinship between these literary genres and the paintings; they would make great covers for a five-volume epic.
The Course of Empire
Collection of The New York Historical Society
All oil on canvas and 39.5” x 63.5”, except for “The Consummation of Empire” at 51″ x 76″