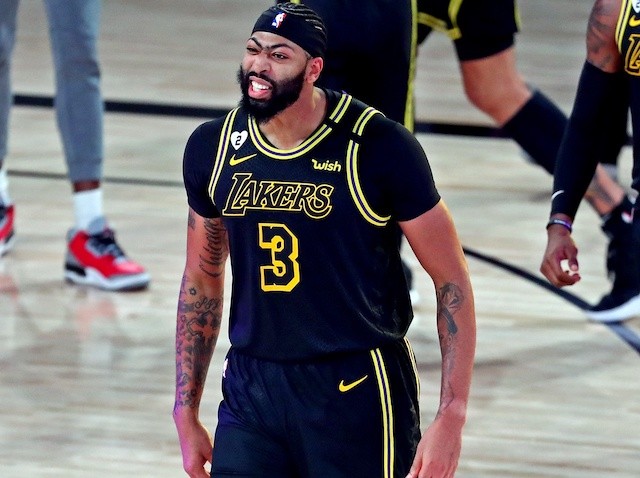 The Los Angeles Lakers’ triumph in the 2019-20 NBA season will undoubtedly remain one of the highlights of LeBron James’ illustrious career.

In a campaign that ended almost exactly 12 months after its tip-off due to the coronavirus (COVID-19) pandemic, L.A. quickly emerged as one of the favorites for the title. Under a new head coach in Frank Vogel, the Lakers owned a formidable defense that carried them to a No. 1 seed in the Western Conference — and then a dominant playoff run in the secluded Orlando bubble.

James’ partnership with Anthony Davis in the duo’s first season together was just as important to the Purple and Gold’s victory. The two All-Stars clicked instantly, complementing each other in a way perhaps not seen in the NBA since Kobe Bryant and Shaquille O’Neal led the Lakers to a three-peat in the early 2000s.

Hence, it shouldn’t come as a surprise that Davis was heavily involved in the 37-year-old’s favorite moment as a Laker:

AD hitting that game winner vs Denver in the WCF!

The day before the 2022 Conference Finals began, James picked Davis’ buzzer-beating dagger three against the Denver Nuggets in the 2020 playoffs when asked about his fondest memory of his time in L.A. during a Q&A session on Twitter.

On Sept. 20 that year, and with just 2.1 seconds left in Game 2 of the Western Conference finals, Davis capitalized on miscommunication among Denver’s defenders, finding an open look on the left wing.

Rajon Rondo passed the ball to the forward from the baseline and, despite Mason Plumlee charging at Davis to swat his shot away, he quickly fired a triple that rattled the net — sealing a two-point win for the Lakers and earning them a 2-0 lead in the series.

L.A. wore the iconic Mamba edition jerseys that day, honoring Kobe Bryant’s memory after he had died in a helicopter crash earlier in January. Davis yelled “Kobe” as he celebrated the win with teammates, making the moment all the more special.

During the same Q&A with fans, James was asked about his favorite player under 25 years old currently playing in the NBA.

And the four-time NBA champion picked Dallas Mavericks prodigy Luka Doncic, who’s led his team to this year’s conference finals after a Game 7 win against the No. 1 seed in the West, the Phoenix Suns.

The Mavericks will fight for a spot in the NBA Finals with the Golden State Warriors.