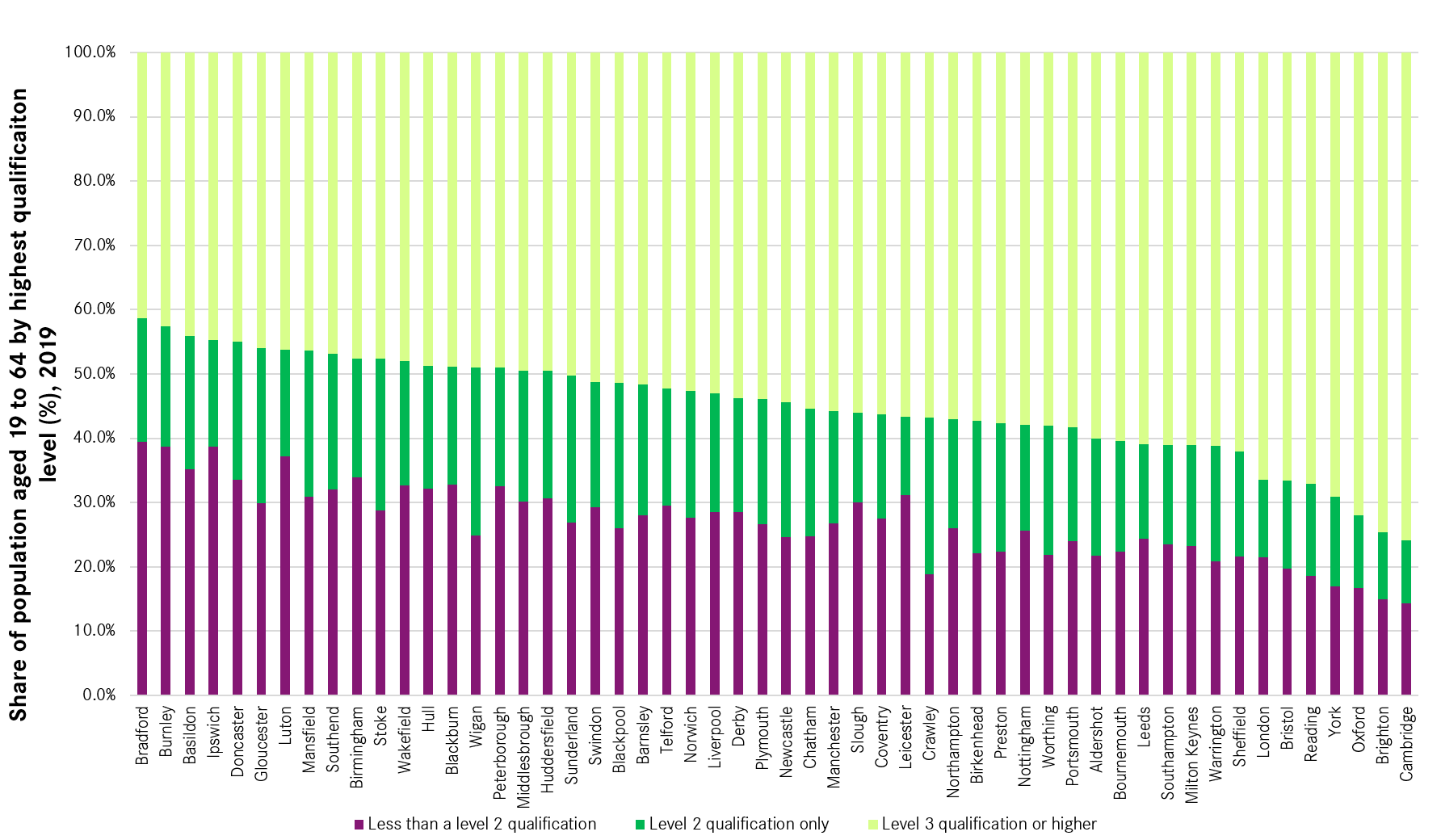 Levelling up skills from Whitehall can only go so far

The different mixes of skills and demand for further education courses across the UK mean that many of the least-skilled cities and large towns risk being left behind by the Government’s further education and skills programme.

If the Government truly wants to narrow the skills gap in every place, local governments must be further empowered to design and implement further education and skills programmes. The composition of skills and the demand for skills training across the UK is complex, and centrally-led programmes and targets struggle to adjust for these variations.

Local governments are best placed to understand local demand for skills and to work together with learners to mitigate the barriers they face to further education. Local authorities should take advantage of the white paper’s devolution framework to deepen their skills competencies and deliver effective skills programmes for their areas.

In the Levelling Up White Paper, the Government aims to increase the number of people completing high-quality skills training in areas with low rates of level 3 qualifications (equivalent to A levels). To achieve this ambition, and to narrow the skills gap in all places, participation in further education at level 1 and 2 must increase.

Figure 1:  Those with low or no formal qualifications make up a large share of the population in the least skilled cities and large towns

As it is more challenging for adults with low or no formal qualifications to successfully study for a level 3 qualification, cities and large towns like Bradford and Burnley may face greater demand for level 2 and below courses. Further education at levels 1 and 2 may also enable many low-skilled learners to progress to level 3 qualifications in the future.

Figure 2: The composition of those with low or no formal qualifications varies, even across cities and large towns with similar proportions of level 3+ qualifications 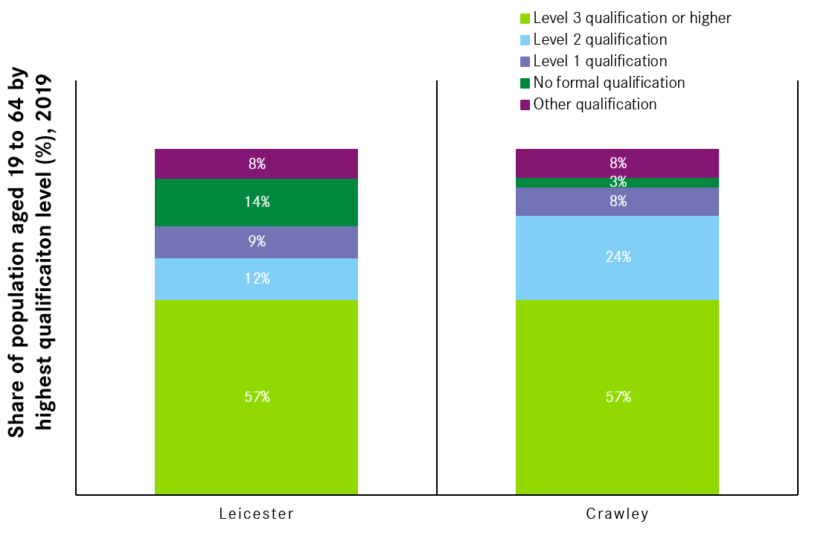 Crawley is well placed to benefit from the free level 3 course programme under the Government’s Lifetime Skills Guarantee, as nearly a quarter of the population already have a level 2 as their highest qualification.

Meanwhile, Leicester is likely to benefit less from the programme, as many of those without level 3 qualifications also lack level 1 and level 2 qualifications. Cities like Leicester would benefit more from skills programmes for those with low or no formal qualifications, and with a locally-led understanding of the barriers that learners in those areas face.

Increases in further education participation at level 2 and below is required to narrow the skills gap in every place, but in the context of substantial cuts to the adult skills budget, these are the courses which have experienced the sharpest decline in participation.

Figure 3: Sharp decreases in participation in level 2 and below further education has occurred across English cities (2015 to 2019) 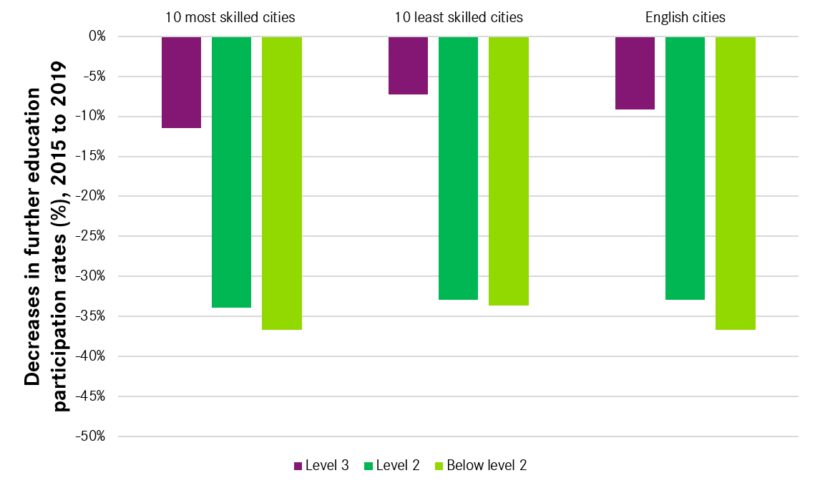 Though the average declines in participation rates in Figure 3 are remarkably similar, substantial variation across individual cities indicates that even in the context of budget cuts, local conditions have a strong effect on further education accessibility and take-up. Figure 4 shows Plymouth and Newcastle have experienced substantially different declines in further education participation over the same period, despite having a similar composition of qualifications.

Figure 4: The decline in further education participation varied even across cities and large towns with similar skills compositions 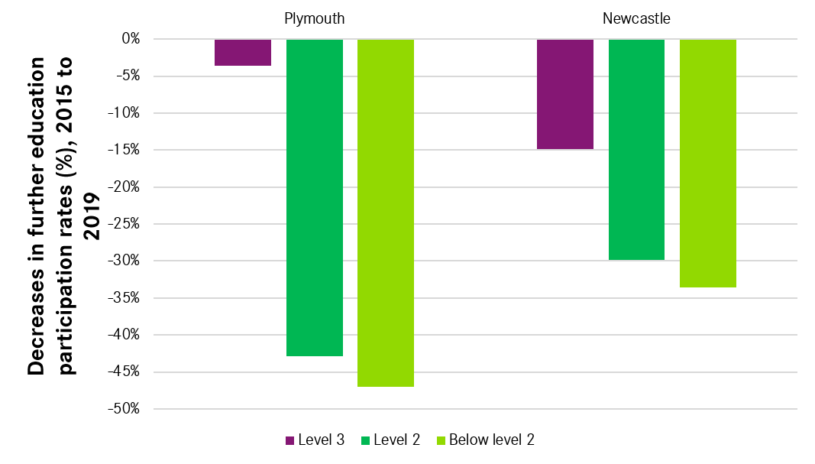 Central government policies are helpful, but closing the skills gap in all places will require locally-led programmes

The composition of qualifications across low-skilled areas of the UK, and the sharp decline in participation in level 2 and below courses in recent years, shows that Government will struggle to narrow the skills gap and achieve the white paper’s skill mission without further funding increases and further devolution of skills policy.

Though centrally-led further education programmes are welcome and will help many learners, they often set simple targets and interventions which cannot account for the complex needs of different areas.

Levelling up depends on stronger local governments who are empowered and resourced to deliver for their areas; and the skills mission is no exception to this necessity. Local governments should seek to deepen their role in skills policy where the opportunity arises. This may involve their progression to a directly-elected mayor model of local governance, and accepting the white paper’s “county deals”, in order to fully undertake the skills competencies laid out in the devolution framework.

The post Levelling up skills from Whitehall can only go so far appeared first on Centre for Cities.

Levelling up skills from Whitehall can only go so far