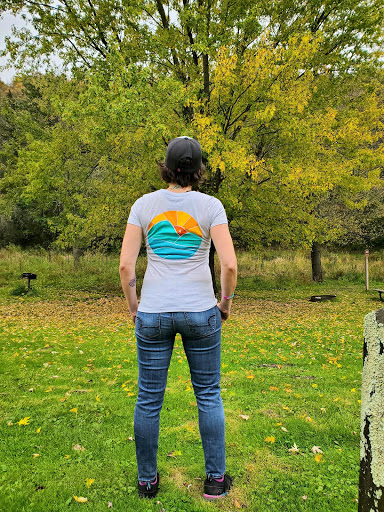 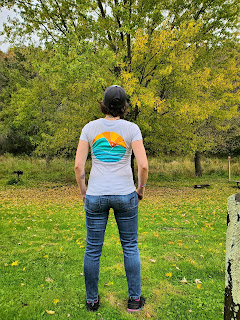 Due to multiple reasons, we knew we wouldn't be attending the Pertnear 20 event in Viroqua, Wisconsin this year, however, I had hoped that we would be able to still visit and ride their local singletrack.

As it turned out on that particular Tuesday, a surprise re-scheduling of an appointment and cooperative weather allowed us to take an impromptu trip out of town to Viroqua, Wisconsin!

Due to the timing, we wouldn't have time to visit some of my favorite stops in town which would be Blue Dog Cycles and Gary's Rock Shop as our focus was riding as much as we could at Sidie Hollow Park given the time allowed. Which in the fall months, it feels like you're trying to cram as much in as possible with remaining daylight, because sooner than you think it'll start getting dark at 5 p.m.


The drive to Vernon County is always scenic and something that I enjoy greatly. We were gifted some beautiful fall colors on our way to Sidie Hollow as the hillsides were lit up with an array of reds, oranges, and yellows. The sky was a bit on the cloudy side, but I hoped that we would eventually see some sunshine!

When visiting to ride the local mountain bike trails in Viroqua, especially if you haven't ridden there before, I would highly recommend using Trailforks for navigation. What is awesome is that they are starting to install some new signage on the tails, particularly at intersections. They are a simple system that has a "You are here" spot so you can have a better idea of where you are at in conjection of the trails- super handy! We've primarily explored Viroqua only during the Pertnear race, so everything was laid out. Any time we've gone to Viroqua in the past has pretty much been an "I think we go here." So this time with the aid of the maps (we actually didn't use Trailforks) we were able to put together trails in a pretty fun way.

We were particularly excited to check out the new, machine-built trail dubbed Vitrailius created by Landowski Trailworx. Per the description on Trailforks: "A rollicking tour de flow, created by Landowski Trailworx of Madison, Wisconsin. This machine-built gem is sure to put Sidie Hollow on the map for it's for its fun, flow-y features, challenging B-Lines and inordinate about of spunky kickers that line the edge of the path. Travelers far and wide and locals alike will session this trail endlessly until their cheeks hurt from smiling so much." 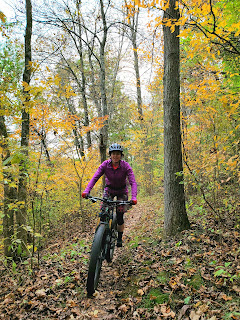 After riding in La Crosse the week prior, I was very curious to see how this downhill would flow.

We parked in the lower parking lot area (closer to the lake) and made our way up the trail we were most familiar with. The leaves were lovely and the view of the lake from the trail was absolutely stunning. I had to stop and get a photo!

We had made our way towards a spot where there was another parking lot (where DNR intersects with Vitrailius.) Travis noticed a booter made from rock, I think the first time we both avoided it but then had the idea "Let's give it a go!" Travis wasn't expecting me to follow suit, but I did.

It was not the best experience and I think it's partly due to several things.
#1. It kinda shot you up rather than out and forward like our ramp at home.
#2. I forgot my Five Ten Freerider Pro shoes (again) and as much as I like the 2FO 1.0 shoes for 99% of my riding when it comes to trying to do technical skill-building, I'd prefer grippier soles.
#3. I had my Stumpjumper's rear shock in "climb" mode, which offered little for any compression when I landed.

I had treated this feature like our backyard ramp and ultimately came down too front heavy because I wasn't expecting to be so "up" rather than out. My form would've worked fine for what I was used to. The lack of squish basically blew my feet off my pedals (I think) and I hit my right shin hard with my pedal. I looked down and saw I had a goose egg on the front of my shin with barely a pedal poke. I wondered what the (bleep!) I had done wrong and felt like I had to try it again. I have gone off some features similar to this, I should be able to be successful!

Uh. Wrong.
The second time was just as bad as the first (I still hadn't turned the rear shock on...) and my pedal hit my right shin again. This time I had a pretty solid gouge from my passive pedal pins. Knee pads are great for knees...they won't save your shins. Travis was pretty much in a state of "What the heck are you doing?" And all I could do was look down at my leg and think "Well, you can't learn if you don't fail." I was split into two halves- one wanted to try it again. (Travis discouraged that due to if I hit my leg again I'd probably need stitches) and the other felt a little shook up. It had been a while since I "failed" that badly when trying a feature.

I looked at the blood flowing down my shin and over the sizable lump that had formed and figured that we should just keep riding. The sooner I could distract myself with something more positive and familiar, the better. 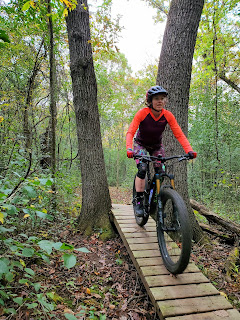 We made our way up the hillside and all I could do was smile with happiness over the beautiful fall colors. This is what I had been waiting for since we saw our first glimpse of tree leaves changing in Hayward! I hummed little tunes to myself along with exclaiming "Wheeee!" when we found sections of flow that let us carry our speed for far longer than our local trails do.

We managed to string up some of the top sections of trail pretty well and eventually came into a section of woods that had the most glorious golden glow of tree leaves you could imagine. I literally was drop-jawed as we entered and exclaimed "I'm SO HAPPY!" Then we were out and back into more of a green section, and I heard Travis say "We're going back in." Then he asked "Do you want to take a picture?" Uh, yes! I took several photos of my bike in the golden forest, hoping that it could at least give a small bit of justice to the beautiful scenery I was seeing. 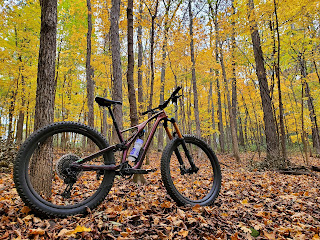 After looping around more up top, we made our way to Vitrailius. We found another spot to session a little as we exited the woods, there is a little bouldery feature you can roll down. Successfully riding down that made me feel a bit better about myself and my riding skills. As we made our way down Vitrailius, we stopped to session another feature that was similar. I rolled down it without issue. We came to another spot that had a feature that could be launched off (which would have more of a level landing like I was used to) or could be rolled down. I rolled down it as I was anxious to have a repeat offender and bash my shin more. We bypassed some of the bigger senders until we came to one that could be ridden down rather easily. The tricky part is it's going up a sandstone hill, so not only do you have sandstone rock, but quite a bit of sand to navigate through as well. It gives you a mental jolt because when you roll up to it, you can't see what's on the other side- so even with having seen it prior to riding it, it still had me feeling a bit intimidated!

I was able to roll down it just fine, and Travis said for me to go ride it three more times. So I did. Each time I was successful and each time it gave me a rush! 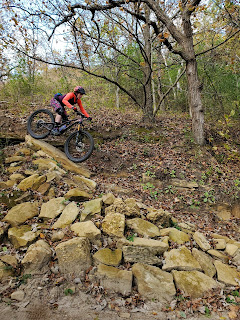 I had told Travis I wanted to ride down Vitrailius again, without stopping to session anything, so we made our way back up to the top so we could accomplish that goal. We had a really fun loop of trail and I was hating that our ride would soon end, but I was getting tired and the day was winding down. Down Vitrailius we went, and I kept on Travis' rear wheel better this time than last, even tho I didn't go off of any of the little booters. I did ride down the two smaller features and the larger one that we had sessioned, but I felt anxious over any other air time.

We came back to the bottom near where I had bashed my shin. Travis wanted to clear the double and I stood off to the side to watch. My curiosity got the better of me when I saw him blasting it. "What's the worst that would happen if I tried to do this and failed?" Well, I got the whole down low of the possibility of casing my front wheel, coming down front heavy, and doing what the mtb world calls a "scorpion." Oh. That sounds fun. Not. 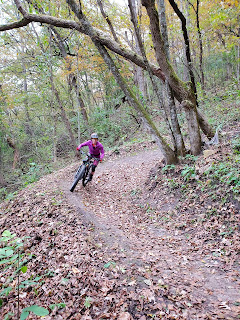 I still wanted to try and Travis had the idea of trying it in a semi gradual way and had me roll with him a couple times so I could get a better idea of what I needed to do with my body. It still felt foreign to me, but I was determined to try. I did set up my GoPro but have yet to see any of the footage, but I'll say that Travis progressed during our session time and he was having a blast! I was maybe not having the biggest blast, but a couple times I think I came very close to accomplishing the goal. I cased it a few times, I almost ran into a tree once, and the last time I don't know what happened...it was a sh*t show! I landed poorly, blew my feet off my pedals, scratched up my left calf, and hit my pubic bone pretty hard on my top tube. I was a bit in shock because I somehow saved my ass from having a crash of some kind! I felt like that was the best way to end my sessioning. I was getting a bit tired and I figured it would be better to stop before I hurt myself. 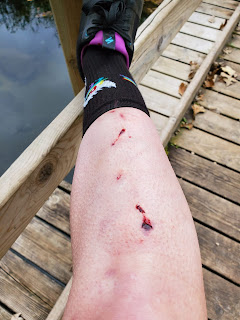 Travis was proud of me for even trying, and the entire time he had been nervous for me, because he knew from experience that there could be some severe consequences. The fact I sessioned without having a worst-case scenario was a good thing. I learned a bit more about technique and what needed to happen. The biggest thing is understanding that in order to progress with anything, you have to accept that you may fail in the process. Especially with mountain biking. I am at a place in my riding where I can ride XC stuff all day without getting hurt, but I'm starting to branch out and expand my skillset. In order to do so, I know that I'll be going out of my comfort zone and into an area where I might potentially get hurt. I can't be afraid of that, because if I am, I won't try. If you don't try, you won't have a chance of succeeding. 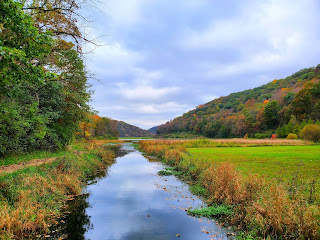 After our session, we made our way out of the park and back to the truck. It had been a great day exploring familiar trails with trying a few new things. My body was tired but my soul was happy! Now it was time to wash up the war wounds and go home for a hot bath and cheeseburgers. The perfect end to a fun mountain bike trip to Wisconsin!
Source: josiebikelife