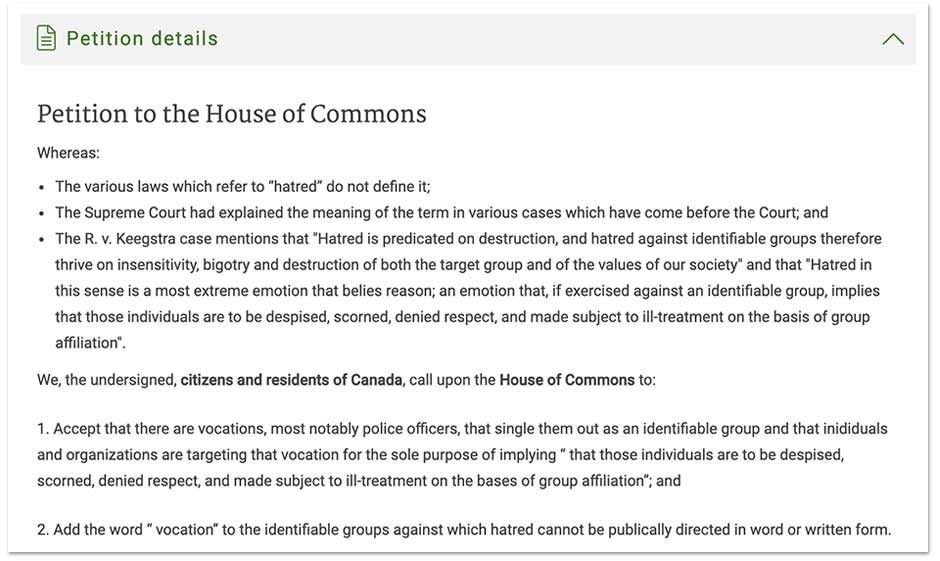 One of Justin Trudeau’s Liberal MPs is sponsoring a House of Commons petition that is calling Canada’s criminal code to give police the power to arrest citizens who criticize them in unfair and insensitive ways.

Kevin Lamoureux, the parliamentary secretary to the government house leader, is listed as the sponsor of petition E-3242, which describes itself as an e-petition on the topic of “social affairs and equality.”

House of Commons e-petitions require a sponsoring MP to authorize petitions brought forward by constituents, although they do not necessarily imply they agree with the opinions set-out in the petition.

In this case, however, Lamoureux told the Winnipeg Free Press he is supportive of the spirit of the petition, stating that he thinks there is a “great deal of merit for us to give more positive attention to law enforcement officers.”

“When it comes to law enforcement personnel, it takes just a few bad apples to portray a relatively negative image, and it’s not fair.”

The petition points to a 1990 Supreme Court case that dealt with a school teacher in Alberta who subjected students to anti-Semitic lessons claiming that the Holocaust was a hoax.

The petition notes the Supreme Court observed “hatred” thrives on “insensitivity, bigotry and destruction of both the target group and of the values of our society” and includes language directed at an “identified group” that implies they are “despised, scorned, denied respect, and made subject to ill-treatment on the basis of group affiliation.”

On this basis, the petition demands “vocations” be added to the list of “identifiable groups against which hatred cannot be publicly directed in word or written form.”

“There are vocations, most notably police officers, that single them out as an identifiable group,” the petition argues. “Individuals and organizations are targeting that vocation for the sole purpose of implying ‘that those individuals are to be despised, scorned, denied respect, and made subject to ill-treatment on the basis of group affiliation.”

The petition was submitted by Stan Tataryn, a former Winnipeg police officer and the past president of the Liberal Party of Canada’s Manitoba chapter.

Tartaryn told the Winnipeg Free Press he was motivated by recent protests against police, in particular criticisms aimed at Winnipeg Police following the killing of a 16-year-old Indigenous girl.

The community advocacy group Winnipeg Police Cause Harm has previously documented an example of a Winnipeg Police Services employee publicly describing their group as a “hate group.”

g) Indigenous people are routinely murdered at the hands of the WPS and to say their gathering to honour the life of Eishia Hudson – the 16 year old girl murdered by the WPS – amounts hate speech is a true chokehold on freedom of expression and the right to assemble. /9

Liz Simons, Deputy Director of the Canadian Anti-Hate Network, said it would be “extremely inappropriate” to use anti-hate legislation to shield police from criticism.

“The police are not a marginalized group,” Simons told PressProgress. “What this petition asks for is to not just be exempt from criticism, but for that criticism to be a crime.”

“Our laws are not there to prevent criticism, but to prevent discrimination, abuse, and violence.”

In a statement to PressProgress, Lamoureux’s office said it disputes the idea that the Liberal MP endorses the petition but confirmed that Lamoureux’s quotes to the Winnipeg Free Press were accurate.

“It would be fair to say that MP Lamoureux supports the work of law enforcement and does not believe they should be unfairly subject to attacks or discrimination,” Lamoureux’s Executive Assistant Eric Napier Strong told PressProgress.

“It also does not, in any way, suggest a belief that the difficulties faced by members of these vocations are equivalent to the difficulties, discrimination and oppression faced by racialized communities.”

Lamoureux’s office said the idea that vocations “including law enforcement” should “receive protection from discrimination does not in any way minimize the very real, very legitimate concerns of racialized communities.”

“It is not a black/white, either/or comparison.”