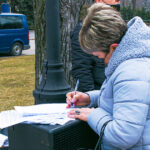 NORWELL, Mass. — Lifelong Democrat and self-proclaimed liberal activist Andy O’Hare added his name to a petition to build more affordable housing while clarifying the construction would take place miles from his home, confirmed sources close to the situation.

“I’m very aware of my privilege and I know I’ve been blessed. Making sure the less fortunate have a safe place to live is a priority of mine,” said O’Hare. “I just need to make sure that my own property value doesn’t go down in the process. Not to mention the tax hit. Everyone deserves a fair shake here, and I think the government needs to step up and provide for these people, but the government should also know that my town isn’t a great spot for this project. I can’t even imagine how much my insurance rates would go up if we let those beautiful souls move into town.”

“We have been stationed outside of every Star Market and Stop and Shop on the South Shore collecting signatures and we always get such a warm response until people realize that construction might happen within 10 miles of their home,” said advocate Terry Palmieri. “I’ve had people spit on me, throw my clipboard into the trash, and threaten to have me arrested ‘for communism’ and then I see them drive off and they have Bernie Sanders bumper sticker on their car.”

Local far-left organizers were not surprised by this revelation.

“We see this all the time. I’ve known so many people that fought for a massive redistribution of wealth for two years when they were kind of broke in college, then they got a programming job at HubSpot and started calling the cops on people running needle exchanges,” said Amari Liston. “But those same people still quote Fred Hampton in their Instagram posts every time a Republican does something they don’t like. Just a few weeks ago I tried to contact a couple old friends to help me with a food drive for the unhoused near Fogg Park and they had their lawyer send me a cease and desist letter saying ‘they don’t want to encourage a seedy element in their community.’”

At press time, O’Hare enthusiastically signed another petition to open up a third Panera Bread in town.